Nunavut fisheries to forge ahead despite COVID-19

With added health and safety precautions, the territory’s shrimp and turbot will still hit the market 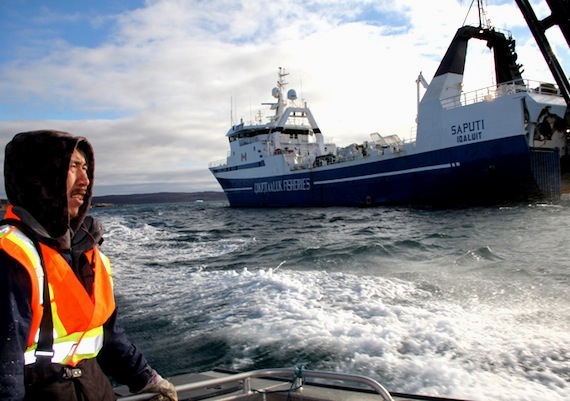 Qikiqtaaluk Corporation’s vessel, Saputi, is out on the water around Newfoundland and Labrador, operating under new guidelines because of the coronavirus pandemic. (File photo)

In two weeks, Qikiqtaaluk Corporation’s vessel, Saputi, will come to port in Newfoundland with new rules to follow to help avoid the spread of the novel coronavirus.

Governments across the country are restricting travel and business operations in the midst of the viral outbreak, but Jerry Ward, director of fisheries for QC, said they’re keeping on track, just with a few extra precautions in place.

The Saputi set out in early March for shrimp fishing around Newfoundland and Labrador, Ward told Nunatsiaq News.

Though it was before much of the response to the coronavirus had ramped up, he said, they planned to take precautionary steps to ensure there was no threat to the crew.

“We started this going back quite some time ago when we realized this would be an issue in Canada and in the fishing industry,” said Ward.

The 27 crew members on board, including 12 Inuit from Nunavut, had their temperatures taken and were asked whether they felt ill or had any symptoms like a cough.

They were also asked whether they’d travelled outside Canada, in particular to coronavirus hotspots such as Italy, Iran and China.

If they answered yes to any of these, they would have been given medical attention and not allowed to board the ship—though this wasn’t an issue for any of the crew.

“We certainly wouldn’t put them on the vessel until we know it’s fine,” said Ward. “The health and safety of our crew on board is paramount.”

Crews typically do two consecutive trips out on the water and the current crew is just on their first.

Ward said when they return to port to offload their catch, rather than coming to land as usual, the crew will stay on board until they set off again. This measure is to remove the risk of contracting the virus on shore.

“The crew has been very good to work with on this,” he said. “The reality is the safest place to be today is on a vessel where everybody is healthy and you’re only in contact with people on the vessel.”

The whole industry is weighing how to operate in these challenging times.

Last week, the Nunavut Fisheries Association had its first of what executive director Brian Burke said would be many calls on how to operate during the COVID-19 pandemic.

“For us, the big thing is to try to be proactive,” Burke said. “It’s to really make sure we’re protecting our crews and protecting Nunavut.”

The measures put in place by QC, a member of the association, will also be instituted by its other members, Baffin Fisheries, the Arctic Fisheries Alliance and Pangnirtung Fisheries, Burke said.

But there are still some logistics to work out.

With no port for the NFA’s members to use in Nunavut, crews offload in Newfoundland and Greenland. For Nunavummiut crew members, this means flying in and out of the territory—a heavily restricted activity at this point in time.

“A crew coming from Nunavut and back to Nunavut, that’s where the risk factor is,” Burke said. “If you got a clean ship, you should be OK, it’s in the travel to and from.”

After the Saputi crew’s second trip, they won’t be taking Inuit crew members out until after the risk has died down, in an effort to keep the coronavirus out of Nunavut, Ward said.

“It’s very sensitive with Nunavut being a location of geographic isolation and so on,” Ward said.

“The board and senior management here at QC is very sensitive to this issue and understand the urgency.”

It will be early May by the time the Saputi returns from its second trip, so he hoped this measure won’t be required and the pandemic will have slowed enough to staff the vessel with Inuit again.

For those already out on the water, Ward said they’ll follow the requirement to stay in a hotel in Ottawa for two weeks before returning home to Nunavut.

But the new restrictions on travel could pose even more of a regulatory challenge for crews that dock in Greenland.

Burke said they’re still waiting for direction from the federal and territorial governments on how travel restrictions could affect these operations.

“The fishing for turbot really won’t be starting until May or June, so hopefully we have some time to deal with those things and to get some protocols in place from the governments in Greenland and Canada,” Burke said.

The Department of Fisheries and Oceans has said it will continue to work with fisheries as usual in terms of licensing and other regular activities required to keep boats on the water.

“Their intention is to provide those services: the CFIA is continuing inspections on a timely basis and DFO with licences and quotas. I’ve got nothing but respect for how it’s gone.”

And it’s a good thing as the demand for Nunavut fish has hardly dropped.

Ward’s seen first-hand how the market’s been affected by the coronavirus globally, with China, Japan and the United States being the biggest customers for Nunavut fish.

“Clearly what’s going on in those markets is there’s less eating out and more eating in,” said Ward. “And people aren’t buying live fish product but buying frozen.”

Both Nunavut’s turbot and shrimp are sold frozen, so while they’ve seen a drop in restaurant sales, it’s been picked up on the household consumer side.

The only slowdown in sales was in China at the onset of the coronavirus epidemic, he said. Now, they’re seeing restaurants open up again and the market levelling off.

While the pandemic is changing the way they do business, Ward was confident that keeping protocols in place for health and safety would allow them to continue.

“Like any business, our objective is to keep our business going—commerce is commerce and you do what you can,” he said. “It’s a balancing act between both of them.”

Burke was also optimistic for NFA’s members that the current and coming seasons would continue as usual.