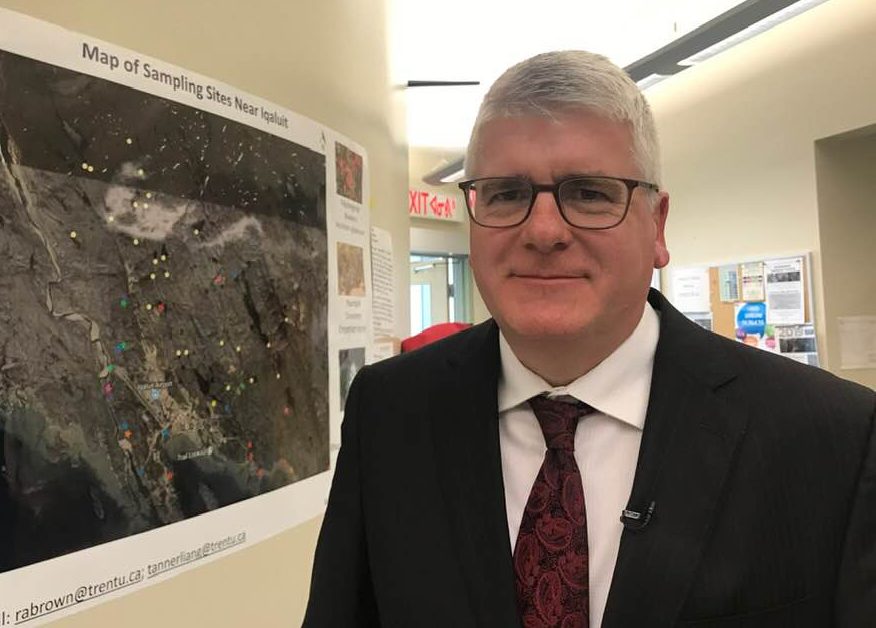 James McKenzie, principal auditor at the Office of the Auditor General of Canada, has released a report that examines how well Nunavut’s Department of Education, Nunavut Arctic College and the Department of Family Services helped high school students and adult learners transition from high school to post-secondary education and employment. (Photo by Emma Tranter)

The Office of the Auditor General of Canada says Nunavut’s Education Department does not adequately prepare high school students or adult learners for either post-secondary education or employment.

The results of a three-year audit, which examined whether Nunavut Arctic College, the Department of Family Services and the Department of Education helped high school students and adult learners transition through post-secondary education and employment, were released on Tuesday afternoon at Nunavut’s legislative assembly.

The report, titled “Support for High School Students and Adult Learners,” states Nunavut’s Education Department has no strategy to help students graduate and transition from high school to post-secondary education or employment and that adults in the territory are facing major barriers to advancing their education.

The Government of Nunavut agreed with all 12 recommendations, the report states.

“Overall, we found a number of gaps and barriers in Nunavut’s education system that made it difficult for high school students and adult learners to succeed academically and transition to post-secondary education and employment,” the principal auditor, James McKenzie, said at a news conference.

Department of Education did not prepare students for post-secondary education

The audit studied seven high schools across Nunavut’s three regions over a period of three school years ending in 2018. The names of the seven schools are not public, but may become public later in the legislature’s discussions of the report, McKenzie said.

Only four of the seven schools studied had students prepare career and program plans meant to help guide students through high school. Nunavut’s high school curriculum requires Grade 9 students to develop these plans and update them at least once a year, the report states.

The audit also found that some students need more than one year to complete a grade. The report states 39 per cent of students enrolled in Grade 10, 11 or 12 had been enrolled in the same grade the year before.

Of the students who took more than one year to complete a grade, one-third would leave school before finishing that grade.

The report highlights the need for alternative pathways to graduation to help students stay in school. At the time of the audit, only one graduation pathway was available for students. The department was also examining alternative diploma options at the time but had set no clear direction or timeline to complete this work.

In a response to one of the report’s recommendations, the department said it staffed a new position to “support the transition of adult learners from either high school, post-secondary education, or the labour market.”

All seven schools offered courses that provide hands-on learning, but only one school, Kugluktuk High School, which is named in the report, offered a pre-trades program.

“What we found interesting about the program in Kugluktuk is … they offered the hands-on learning, but they also emphasized the math and the academic classes,” McKenzie said.

The report also points out that Nunavut Arctic College did not have an outreach strategy or team to inform high school students about its programs.

And for prospective students who might have gone searching for the college’s offerings, they would have found the program calendar and admission requirements to be out of date.

But the problems also lie within the Education Department, according to the report. In the department’s educator development division, which is responsible for training school staff on the department’s directives and improving teaching practices, 18 out of 22 positions were vacant at the time of the audit.

“There’s a lot of discussion about the teachers, but the curriculum and the educator support people play an important role in supporting the teachers,” McKenzie said.

In the curriculum development division of the department, 12 out of 21 positions were vacant. The curriculum for many courses had not been updated for more than 10 years or to “reflect the Nunavut context,” the report states.

Department officials said these vacancies were the result of many factors, including lack of housing, a lengthy staffing process and a low number of applicants, the report states.

In 2018, Nunavut’s Education Department created a three-person team responsible for career development programming and the review and modification of the department’s guidance and course offerings on career planning.

Only the team lead position had been staffed by the end of the audit period, the report states.

At the time of the audit, the Education Department did not have formal guidance counsellor positions in the schools. Two of the seven schools had assigned teachers to provide guidance and advice to students. 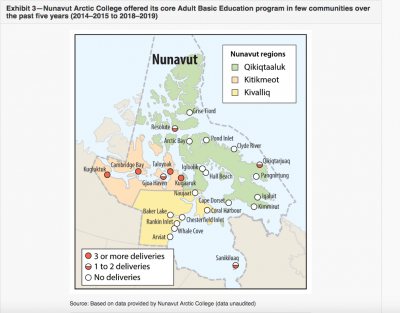 Nunavut Arctic College’s Adult Basic Education program has only been available in a few communities in recent years.

Adult learners face barriers to developing their literacy and other academic skills needed to get a high school diploma, enter the workforce or enter a post-secondary program, the report states.

Nunavut Arctic College delivers an Adult Basic Education or “ABE” program that provides adult learners with similar courses to what is available in the territory’s high schools. The ABE program was not offered in most of Nunavut’s communities over the last five years, the report notes.

The audit also found that preparatory programs offered through the college to help learners develop skills necessary to access the college’s programs, such as nursing and teaching, were only offered in a few communities because of funding constraints.

Additionally, financial aid was not available to adult learners taking part-time programs, high school courses and most ABE programs. As a result, many adult learners had to leave their communities to access these programs, the audit found. 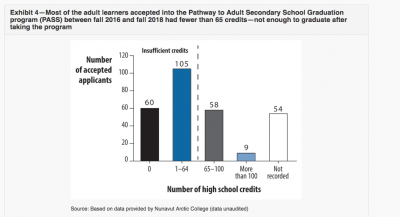 Most students enrolled in the Pathway to Adult Secondary School program started with so few credits, they wouldn’t be able to graduate even after taking the program.

The Pathway to Adult Secondary School (PASS) program offered through the department and the college offers seven courses where learners can earn up to 35 credits.

But 71 per cent of participants accepted into PASS had fewer than 65 credits. So even if those students took every course PASS offers, they would still not have enough credits to graduate, the audit found.

The report recommends that the department review the requirements needed to obtain a high school diploma through PASS. In its response, the department said it is currently reviewing the program and commissioned a review in April 2018 to address the policy gap and expects the gap to be resolved by spring 2019.

The audit also found the college was not consistently collecting information on the number of applicants to its programs or the results of entrance tests.

“They’re not sharing that information within the college nor with the Department of Education who also has responsibilities for adult education,” McKenzie said.

“Family Services, the Department of Education, and the college should all really be working together … the more that they can work together and share that information, they can potentially better cater their programs,” he added.

The report notes that at the time of the audit, the GN was reviewing the Education Act. The audit did not examine federal training programs funded by the federal government or the activities of district education authorities.

Auditors who contributed to the report will be meeting with department officials in Iqaluit later this week to discuss the report. The legislative assembly is expected to review the report in the fall and issue a report.

You can find a full copy of the report here.