“People have been asking about them” 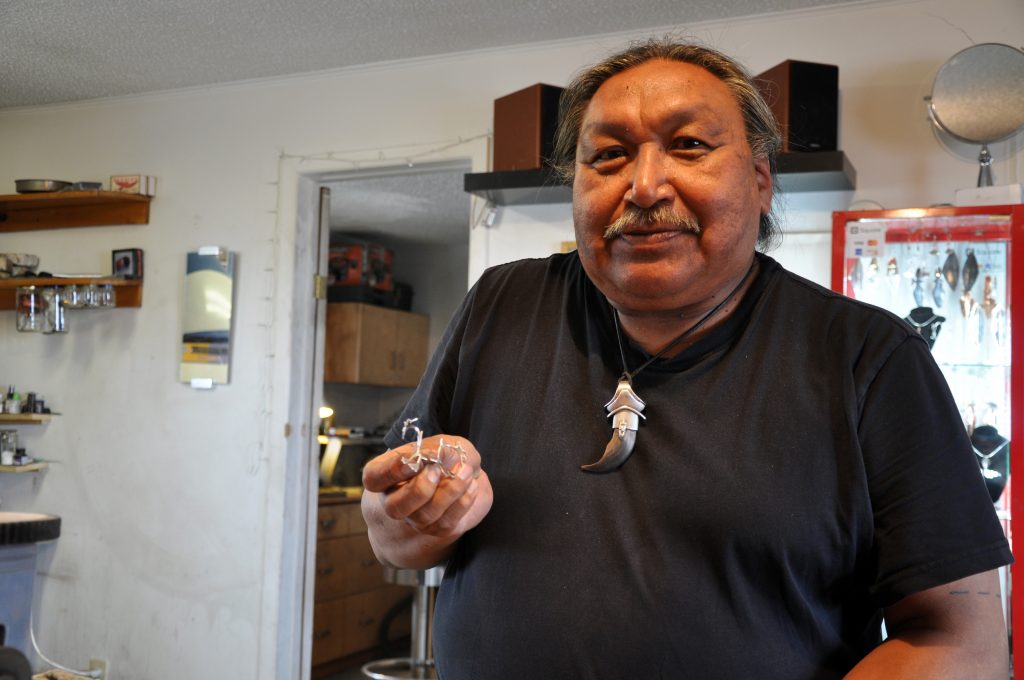 Mathew Nuqingaq shows off a pair of his silver antler earrings, which he crafts in his Aayuraa studio in Iqaluit. (Photo by Sarah Rogers)

The SNC-Lavalin scandal in Ottawa has had an unexpected upside for an Iqaluit jeweller.

Jeweller and metalwork artist Mathew Nuqingaq got a flurry of calls one evening this spring, when Jane Philpott, Canada’s former minister of Indigenous services and president of the treasury board, was spotted on the news wearing a pair of his silver caribou antler earrings.

“I’ve been getting a lot of messages that people have seen her—wearing the earrings—on CBC and other places,” Nuqingaq said from his Aayuraa studio.

One of Philpott’s former staffers, Ottawa-based Kathy Kettler, apparently purchased the earrings for her while on a trip to Iqaluit.

Philpott made headlines when she quit cabinet in March over her fellow cabinet minister Jodie Wilson-Raybould’s allegations that Prime Minister Justin Trudeau’s office tried to pressure her, as justice minister, to mediate a settlement in the corruption trial of Quebec firm SNC-Lavalin.

Both former ministers were expelled from the Liberal caucus in April. 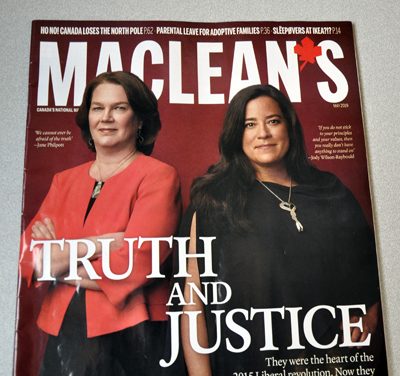 Former federal Liberal ministers Jane Philpott and Jodie Wilson-Raybould appear on the cover of this month’s edition of Maclean’s magazine.

Then the May edition of Maclean’s magazine arrived at Nuqingaq’s studio—its cover image a photo of both Wilson-Raybould and Philpott, the latter wearing the same antler earrings.

“People have been asking about them,” Nuqingaq said.

Any advertising is good, but in this case, Nuqingaq says he supports the person wearing his jewellery. “I truly respect these two ladies and what they’ve done,” he said.

The creation of those silver antlers dates back to 1997, when Nuqingaq and a fellow artist were first commissioned to craft a pair of antlers for a caribou carving that Naujaat artist Paul Malliki was making for the Great Northern Arts Festival in Inuvik.

“So here we were, and we didn’t have much silver,” Nuqingaq said. “But we respected him as an artist and we wanted to impress him.”

Nuqingaq bought a bunch of cuttle fish bone, which is sometimes used for mould casting because it is easy to carve but withstands high temperatures.

He said it took three sleepless nights to craft the original pair of antlers, which were roughly the size of a human hand and gold-tipped, with gold from Nunavut.

Nuqingaq kept making antlers, though a much smaller version of them, better suited to people’s earlobes.

“Because they’re so beautiful,” he said. “The reaction was good.”

Nuqingaq is no stranger to celebrity interest in his work.

His trademark snow goggles, styled as silver round sunglasses with slits, made their way onto the eyes of Prince Charles and his wife Camilla Bowles during their 2017 visit to Iqaluit.

And Nuqingaq’s qulliq earrings have reportedly been seen on the lobes of Sophie Gregoire-Trudeau.