Nunavut mineral exploration will plunge to new low this year

Even before pandemic, high costs, uncertain rules had spooked investors 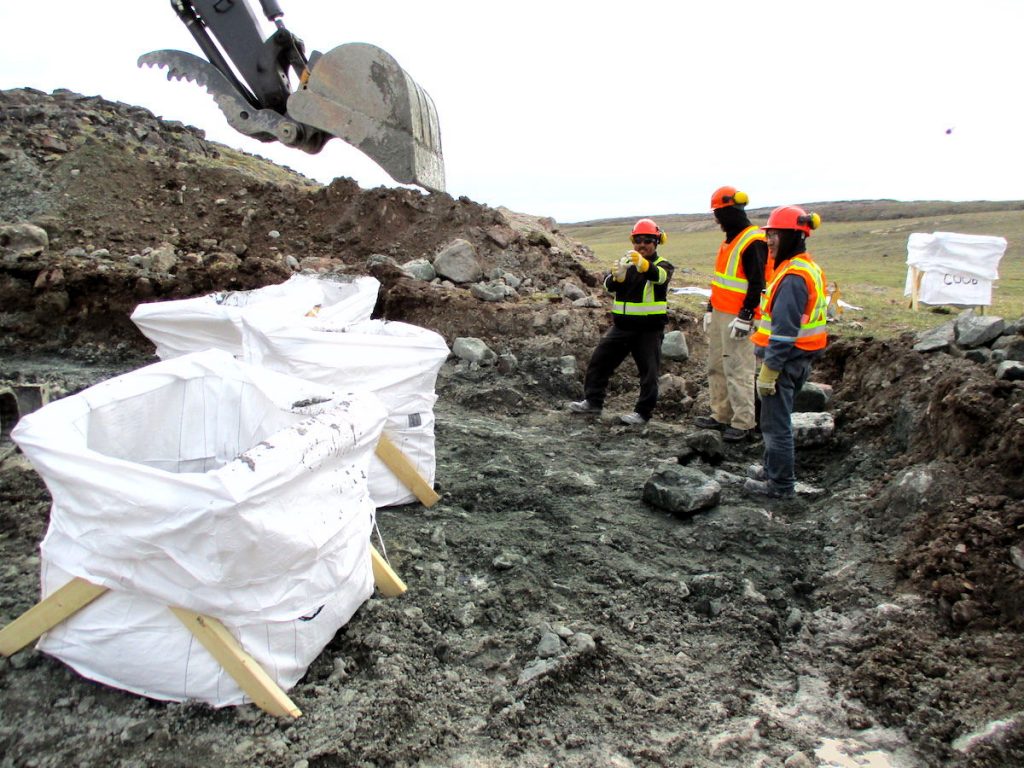 Johnny Tungilik, John Kadjuk and Charlie Manernaluk of Naujaat work at a kimberlite deposit near Naujaat in 2017. Due to the COVID-19 pandemic, North Arrow Minerals Inc. and its partner, EHR Resources Ltd., cancelled their exploration plans this year and will resume in 2021. (Photo courtesy of North Arrow Minerals)

Even before the COVID-19 pandemic, spending on mineral exploration in Nunavut this year was headed for its lowest level in a decade and a half, the NWT and Nunavut Chamber of Mines said last week.

The chamber drew attention to that trend in a chart distributed to media, based on statistics from Natural Resources Canada.

For industry and government, the numbers pose a serious question: if there’s little exploration, where will the next generation of job- and wealth-creating Nunavut mines come from?

Gathered this past February, the NRCan stats estimated that mineral exploration spending in Nunavut has been in steady decline since 2011, and in 2020 was on its way toward its lowest level since 2003.

And then came the pandemic.

The strict lockdowns and protocols that governments across the country imposed to keep their people safe meant that some junior firms had to cancel their 2020 plans altogether.

“An example is my own company, a diamond explorer. Our projects are all in the North and we’re not doing anything. Our big project is in Naujaat and we said we’re not going, and we had to rejig and make plans for next year instead,” said Ken Armstrong, president of the  NWT and Nunavut chamber.

“We’re in a tough spot because investors look at an investment in North Arrow as dead money right now.”

That said, North Arrow’s partner was able this week to find $5.6 million to help pay for a bulk sampling program the two companies plan to conduct at the site next year.

Armstrong said some firms, like Sabina Gold and Silver Corp., have been able to continue exploration by having workers commute directly in and out of their sites without having to pass through any communities.

Others have received approval from the Nunavut government to enter the territory and do exploration work by having their workers undergo the GN’s standard 14-day quarantine—but only if the nearby community agrees in writing.

“It hasn’t ceased completely, but companies are under pressure,” Armstrong said.

As to why mineral exploration has declined in Nunavut, Armstrong said that’s likely due to layers of interrelated factors.

One is unstable mineral prices. That, in itself, makes it hard for exploration firms to raise money.

Others include Nunavut’s infrastructure deficit, the short field season and the high cost of getting work done.

“There have been studies that show that in Nunavut, four or five dollars of spending accomplishes what one dollar would in a road-accessible project in southern B.C. or northern Ontario,” Armstrong said.

And that means mineral exploration investment is flowing into other regions: “In B.C. there’s a lot happening, and in Ontario, Quebec and Saskatchewan.”

Yet another reason can be summarized in one word: uncertainty.

In plain language that means if the rules aren’t clear, investors won’t put money into projects.

“We all go to the same investors. If an investor invests in a company that can’t get a permit for whatever reason, then in that investor’s mind, the whole territory will get painted with the same brush.”

And that applies to the entire North: “As far as investors are concerned, the North is the North and there is no distinction between Nunavut and the N.W.T.,” Armstrong said. 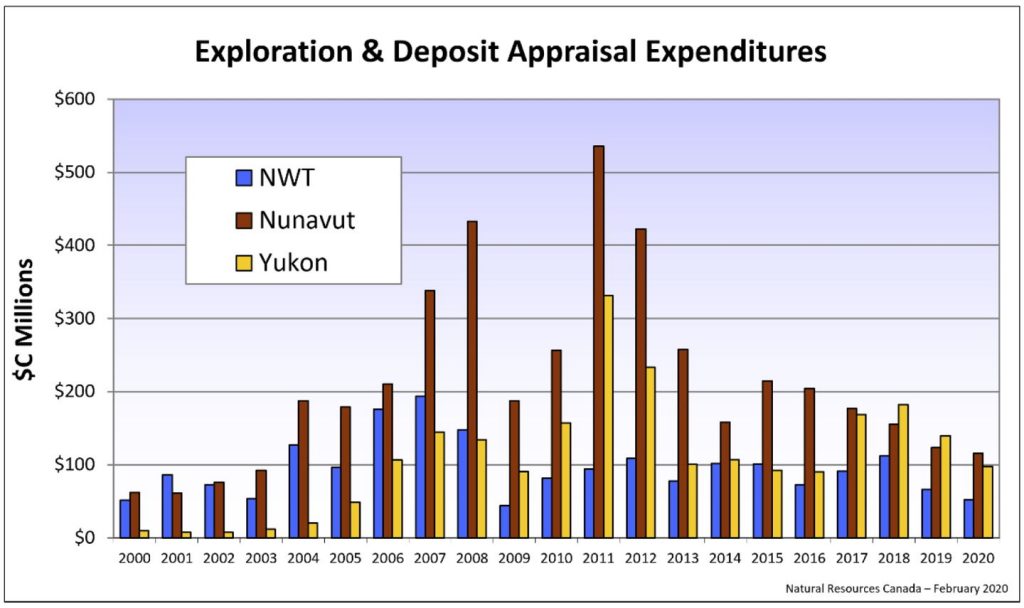 This graph, based on statistics that Natural Resources Canada gathered prior to the COVID-19 pandemic, shows the rapid decline in mineral exploration expenditures across the three territories that has occurred since 2011. (Image courtesy NWT and Nunavut Chamber of Mines)

And Armstrong said another source of uncertainty is the “interminable” process that is intended to create a final land use plan for Nunavut.

The Nunavut Planning Commission started work on that task in 1993, but 27 years later, there’s still no territory-wide land use plan.

“No one really knows what ultimately that’s going to look like. I think it’s come to where companies say, we don’t really know what the goal posts are here, maybe we should go explore somewhere else.”

Despite all that, Armstrong said Nunavut is still a mining-friendly jurisdiction and he praised the Nunavut Agreement.

“Nunavut was formed on the basis of a modern treaty where land-use decisions are made and governed and controlled by the local Indigenous population. Canada is a great example of how it can be done.”

As for the rent relief measures that Northern Affairs Minister Dan Vandal announced this past Aug. 13, Armstrong said those are especially important for small companies that can’t do any exploration work this year.

That’s because the federal government’s mineral lease agreements require companies to perform certain activities and spend certain amounts of money. If they don’t, they can be deemed to have defaulted on their agreements.

The rent relief measures affect roughly 500 mining leases in Nunavut, for which exploration firms pay $2.50 per hectare, with the largest lease comprising about 1,000 hectares.

In total, that amounts to between $1.3 million and $1.5 million of relief for the industry.

“In terms of monetary relief, it’s not a huge number,” Armstrong said. But it does show that Ottawa still supports the mining industry in Nunavut.

“They’re acknowledge the importance of the industry and the fairness of the situation,” he said.