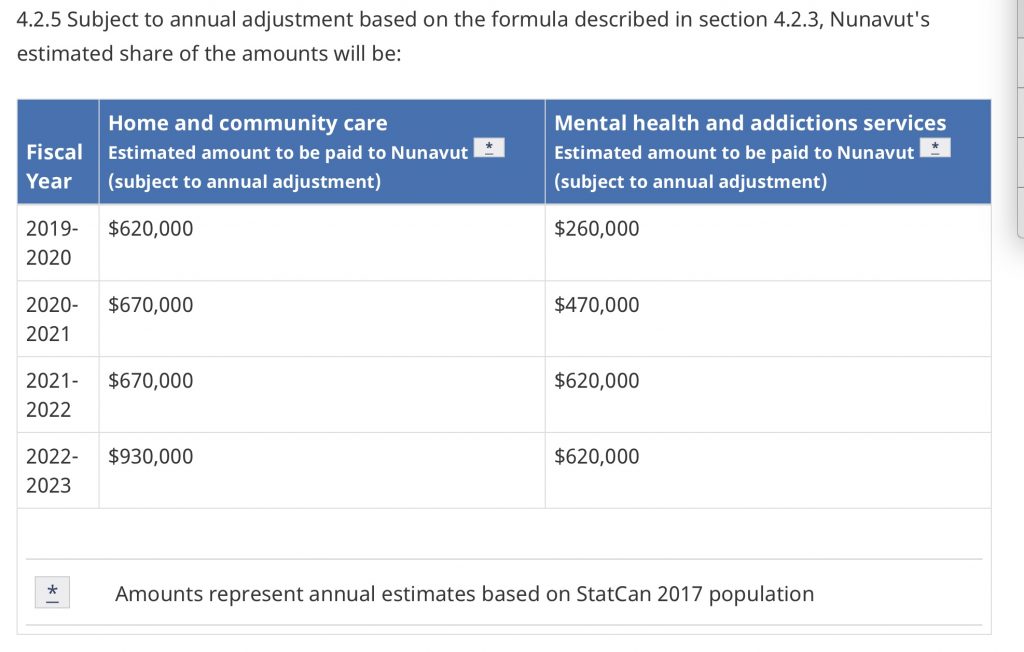 These figures, from an agreement signed between Canada and Nunavut last week and announced on May 9, represent extra amounts for home care and mental health that the federal government first agreed to give Nunavut in January 2017. The figures are so small because they’re calculated on a per capita formula—because of its small population, Nunavut just doesn’t get much out of it.

The governments of Nunavut and Canada have finally agreed on exactly how the territory will spend part of a small stream of health care funding targeted to home care and mental health that Ottawa first agreed to give in January 2017.

Under the agreement, announced May 9, the Government of Nunavut states how much of the money it’ll spend each year between 2019 and 2023 on mental health and addiction services, and home and community care, and how it’ll account for it.

The deal is related to a funding agreement first announced in January 2017, when Jane Philpott, then the federal health minister, was still battling the provinces and territories over the renewal of their Canada health transfer deals.

Under the previous Conservative government of Stephen Harper, those Canada health transfer agreements had, over a period of 10 years, been increasing at a rate of about six per cent a year.

After the 2015 election, the Liberal government offered take-it-or-leave it renewal deals—which the provinces and territories grudgingly accepted—that cut that annual rate of increase to about 3.5 per cent a year.

At the same time, they offered to give the provinces and territories extra money targeted to home care and mental health.

But the federal government also demanded that the territories account for those small amounts of money by reporting health outcomes to their residents.

“In the coming weeks, governments will develop performance indicators and mechanisms for annual reporting to citizens, as well as a detailed plan on how these funds will be spent, over and above existing programs,” a federal government news release said in January 2017.

However, it took more than two years for Ottawa and Nunavut to agree on how to do that—in a deal announced just last week.

The full text of the deal—signed by the new federal health minister, Ginette Petitpas Taylor, and by Nunavut Health Minister George Hickes, is available here.

Compared with the GN’s total health care budget for 2019-20, which comes to about $466 million, the amounts of money are tiny.

That’s because of Nunavut’s small population. The amounts, representing the first five years of $11.1 million in proposed spending over 10 years, are calculated on a per capita basis.

But Nunavut must still provide financial reports to the federal government, and must also provide data to the Canadian Institute for Health Information so that Nunavut’s outcomes can be measured.

A similar agreement, to be negotiated in 2021-22, is expected to cover the remaining five years of the targeted home care-mental health funds.