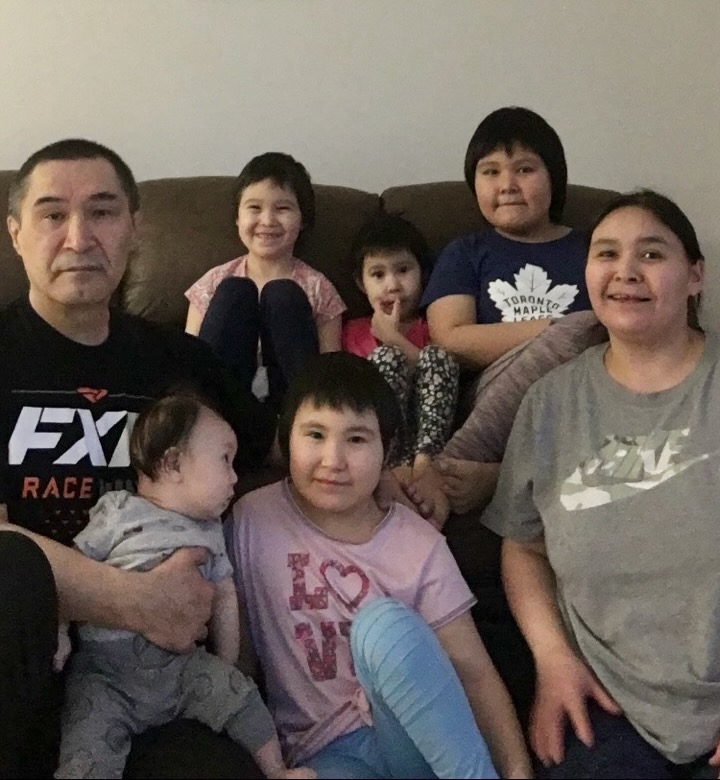 Kuptana Helak (left) and his partner Eva Akhok (right) of Cambridge Bay have struggled with whether to keep their kids at home amid the COVID-19 pandemic or send them back to school. (Photo courtesy of Kuptana Helak)

Nunavut parents weight pros and cons of school amid COVID-19

‘It’s a double jeopardy for me as a parent,’ says Cambridge Bay father

More schools across Nunavut are opening at full capacity after being closed earlier this year by COVID-19, but pandemic challenges have created a bumpy first week back for many students and parents.

With an overcrowded home and two children too young to be vaccinated, one father of five from Cambridge Bay worries about sending his three school-aged children back to class.

On one hand, Kuptana Helak said if one of his kids were to carry the virus from school, his whole family would be at risk. He and his family live in a two-bedroom open-concept home.

“When one of us gets the flu, all of us get the flu, it goes around and around in our home and there’s no way to contain it,” he said.

On the other hand, he and his common law partner want their children to get the best education possible and teaching four kids at home is difficult, with a baby to care for as well.

“It’s a double jeopardy for me as a parent,” said Helak.

In the end, he said they made the difficult decision to send their children back to school soon, both for the kids’ sake and to give Helak and his partner the chance to properly care for their four-month-old and toddler at home.

Helak said many parents he’s talked to around town, worried about COVID-19, have opted to keep their kids at home.

Schools in Cambridge Bay are currently operating at 50 per cent capacity and there were 40 active cases of the virus in the community on Monday.

In Iqaluit, where schools have been open at 100 per cent capacity for one full week as of Monday, multiple classes have been cancelled because of a shortage of teachers and substitute teachers.

“It has not been good,” said Doug Workman, the head of Iqaluit’s district education authority.

A personal hazard assessment tool provided to school staff by the Department of Education says employees must isolate immediately and call the COVID-19 hotline for further instructions if they have at least one symptom of COVID-19.

Between the two elementary schools, the middle school and the high school in Iqaluit, Workman said about 20 teachers were off work last week because they had to isolate.

A fuel leak at Aqsarniit middle school last week shortened the week even more for those students.

There are only about 10 substitutes on the list in Iqaluit, and many of them work other full-time jobs, don’t get paid a competitive wage for substitute shifts, or are also substitutes at the French school in town and in Apex, Workman said.

Some student support teachers, who regularly do things like facilitating group work, are stepping up to teach entire classes, he said.

On Nov. 19, before the current wave of the COVID-19 pandemic began, there were 59 vacant teacher positions across the territory, according to Troy Rhoades, a spokesperson for the Department of Education.

When school staff are absent for any reason, substitute teachers are hired, and if there aren’t enough, specific classes can be cancelled temporarily, Rhoades wrote in an email on Jan. 14.

Students are also staying home more than normal. In the first week of full capacity classes, Workman said about 80 per cent of Iqaluit students attended classes on average.

He said based on what he’s hearing from parents, he thinks some are keeping kids at home because they’re worried about the transmission of COVID-19.

“They want to keep their kids safe,” he said.

On Jan. 20, Health Minister John Main said parents must weigh the risk of sending their kids back to school themselves and he understands many factors go into this decision.

When asked last week about school attendance, Education Minister Pamela Gross she couldn’t say how many kids went back to schools across the territory during the first week of reopening.

Nunavut’s chief public health officer, Dr. Michael Patterson, has said the risk of the virus being transmitted within schools is low, or isn’t riskier than other activities in the community.

On Jan. 20, he encouraged parents to consider risks outside of schools, such as visiting between households, which could be the same or greater than the risk of sending a child to school.

Still, Workman said he has been hearing of kids being sent to school after testing positive for COVID-19.

“They’re saying it is minimal transmission in the schools but that’s not what we’re hearing on the ground,” Workman said.

On Monday, schools in Rankin Inlet and Arviat opened to 100 per cent capacity, while schools in Coral Harbour, Igloolik and Taloyoak are completely closed.