“Our objective is to protect the aquatic environment of Meliadine Lake, as well as the integrity of our infrastructures, to ensure the safest operations” 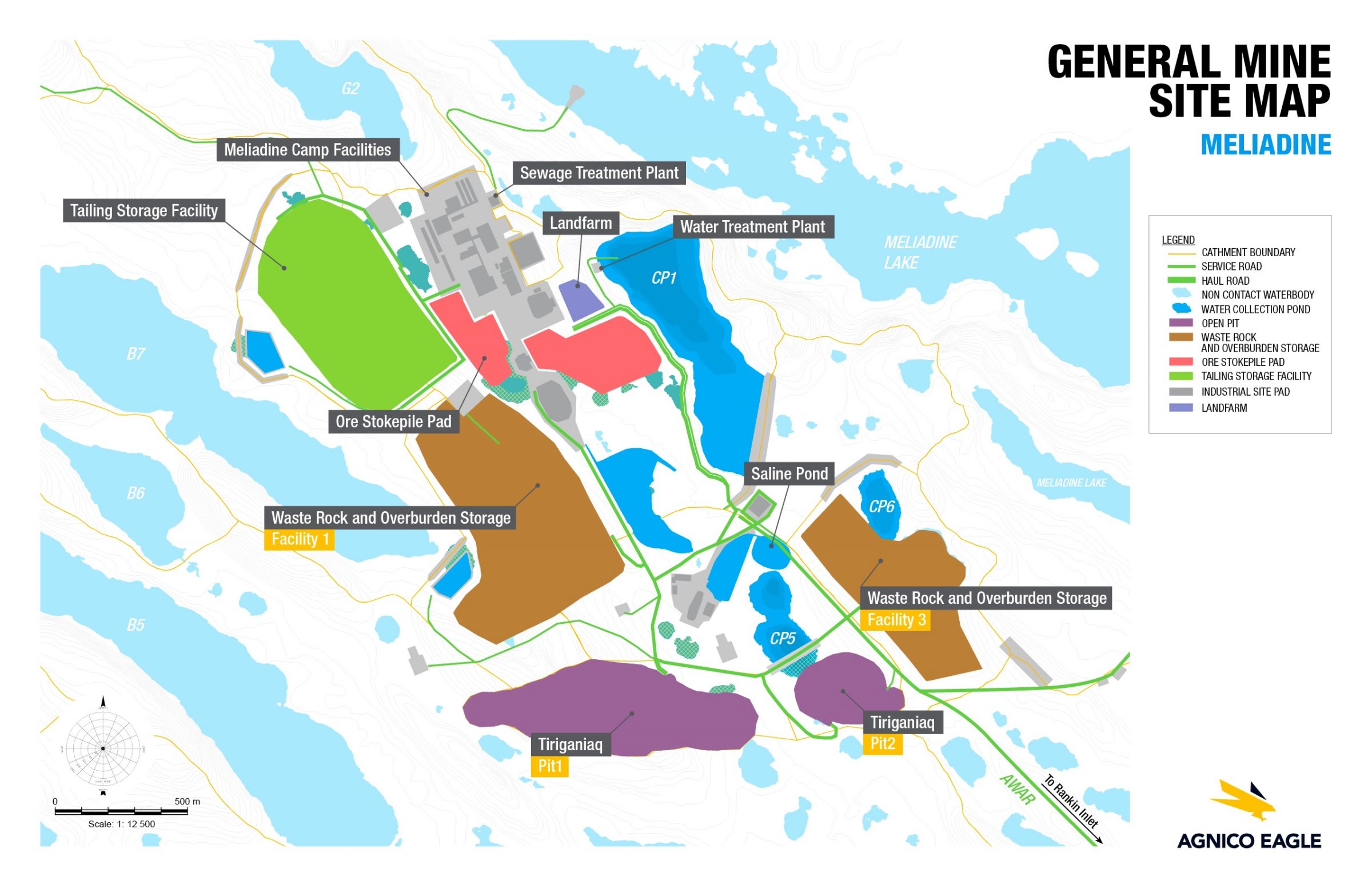 This illustration of Agnico Eagle Mines Ltd.’s Meliadine gold mine shows the location of the containment pond and Meliadine Lake, into which the mining company plans to release water. (Image courtesy of Agnico Eagle)

Agnico Eagle Mines Ltd. has received the green light from the Nunavut Water Board to release water from a containment pond at the Meliadine gold mine into a nearby Lake.

This required an emergency amendment to Meliadine’s water licence, which Northern Affairs Minister Dan Vandal approved on May 12, Agnico Eagle said in a statement emailed on May 14 to Nunatsiaq News.

Agnico Eagle said it would keep the nearby community of Rankin Inlet informed on the progress of the  discharges and the current water quality conditions in Meliadine Lake.

The company said it would also provide results from the water-quality monitoring during the emergency discharges.

As well, Agnico Eagle said it is setting up a water management working group. This group will include a team of experts, with government and Kivalliq Inuit Association representatives, who will discuss the monitoring of the discharge from the containment pond.

Agnico Eagle has also set up a bilingual website, which has a section with questions and answers on the planned discharges of water into the lake.

The request to release water into Meliadine Lake had received some pushback from the KIA because, as an emergency application, it would not involve a public meeting. And there was also some confusion about the nature of the released water, which is not saline, but runoff from around the mine site.

The amendment allows for a time-limited discharge of water from April 29 to Oct. 31, from Containment Pond 1 to Meliadine Lake through the Meliadine Lake outfall diffuser.

And the water will be treated before being released into Meliadine Lake.

The activities approved under this amendment do not include changes to the management and discharge of saline groundwater into the marine environment. That’s the subject of other proposals to the Nunavut Impact Review Board.

“It is important to note that this water is not saline, nor is it process water. It is water that is collected on site from rain and snow melt that gets in contact with surface infrastructure,” Agnico Eagle said.

“The water quality downstream of the diffuser is expected to be drinkable and the quality of the water is not affected by TDS. In fact, the drinking water on site is not treated for TDS particles,” the company said in its Q & A on the discharges.

Analysis and monitoring on Meliadine Lake will be done to confirm that there are no environmental effects during and after the discharge.

“We remain committed to being transparent and to keeping our stakeholders informed as the process continues to evolve. We truly understand the importance of Meliadine Lake and the river system to Rankinmiut as a source for fishing and food, and we have the Kivalliq land and its residents at heart,” the company statement to Nunatsiaq News said.

“This is why we take great care to ensure that our operations do not result in harm to those water bodies. Given the current situation, our objective is to protect the aquatic environment of Meliadine Lake, as well as the integrity of our infrastructures, to ensure the safest operations.”

Preparations are underway to begin discharging water once the spring thaw begins later in May.

Right now, the containment pond is nearly full and will not be able to accept the upcoming freshet.

That’s why, instead of going through the regular amendment process, which typically takes nine to 12 months, Agnico Eagle said it requested an emergency amendment to its water licence from the water board to discharge the accumulated water for 2020 only.