Nunavut residents report fewer sexual assaults than those in other territories: StatCan 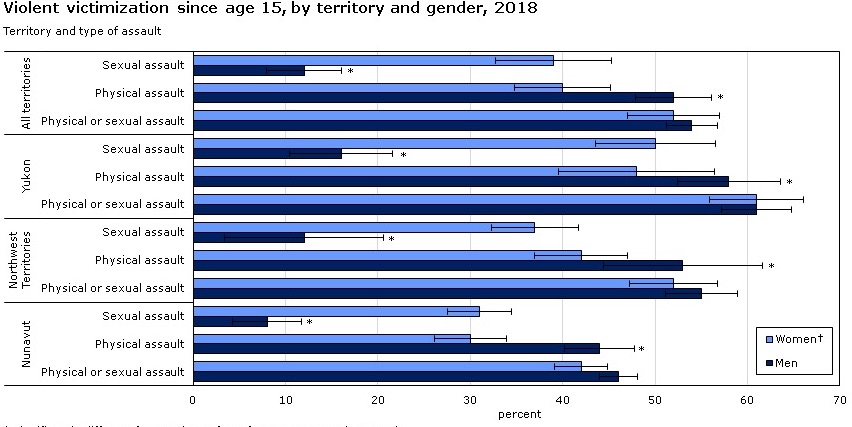 About 50,000 people, or just over half of territorial residents, reported having been the victim of at least one assault, physical or sexual, since the age of 15. Nunavut came in with a lower ranking than Yukon and the Northwest Territories, according to this recent Statistics Canada report. (Graph courtesy of Statistics Canada)

A recent Statistics Canada report finds fewer reports of sexual assault in Nunavut than in the Northwest Territories and Yukon.

But the report goes on to suggest this is not because Nunavut has fewer incidents of gender-based violence, but instead that residents — particularly those in the territory’s smaller communities — are less likely to voice complaints about such incidents.

“Some studies have suggested a normalization of violence among some Inuit women as a result of intergenerational violence and trauma resulting from colonization and experiences at Indigenous residential schools, which could have led to underreporting of violent victimization among those women,” the report states.

The study found that only one in eight respondents across the territories reported their sexual assaults to police.

The report, which draws on information from StatCan’s 2018 Survey of Safety in Public and Private Spaces that looked on the prevalence of physical and sexual assault, says 31 per cent of women and eight per cent of men in Nunavut have been sexually assaulted at least once since the age of 15.

That’s compared with 39 per cent of women and 12 per cent of men overall in three territories.

These results contrast with police-reported data, for which Nunavut recorded highest rates of major assault and sexual assault among the three territories in 2018, StatCan said.

StatCan said that the lower rate from Nunavut in this report could be explained by underreporting in Nunavut’ smallest communities, which report lower prevalence of assault than the territory’s largest centres.

The report found that the prevalence of violent victimization since age 15 was higher in Iqaluit and Rankin Inlet than in Nunavut’s smaller communities.

Fifty eight per cent of respondents in Iqaluit and 56 per cent in Rankin Inlet said they had experienced violent victimization since age 15.

That’s compared to the smaller communities, where only 37 per cent reported having been sexually or physically assaulted at least once since age 15.

StatCan also found a disparity between Inuit and non-Indigenous Nunavummiut: overall the prevalence of violent victimization since age 15 reported by Inuit women (41 per cent) and men (42 per cent) was lower than for non-Indigenous residents (56 per cent of women and 58 per cent of men).

In the three territories, LGBTQ2+ women and women with a physical or mental disability were more likely than other women to have been victims of sexual assault in their lifetime, the report found.

This trend was observed for both physical and sexual assaults, StatCan said.

The survey also found that most of the time the perpetrator was a man acting alone, that most women who have been physically assaulted knew the perpetrator and that the majority of incidents did not involve a weapon or injuries.

To be counted, assaults had to have occurred in a context other than an intimate partner relationship in the 12 months before the survey, and since the age of 15.