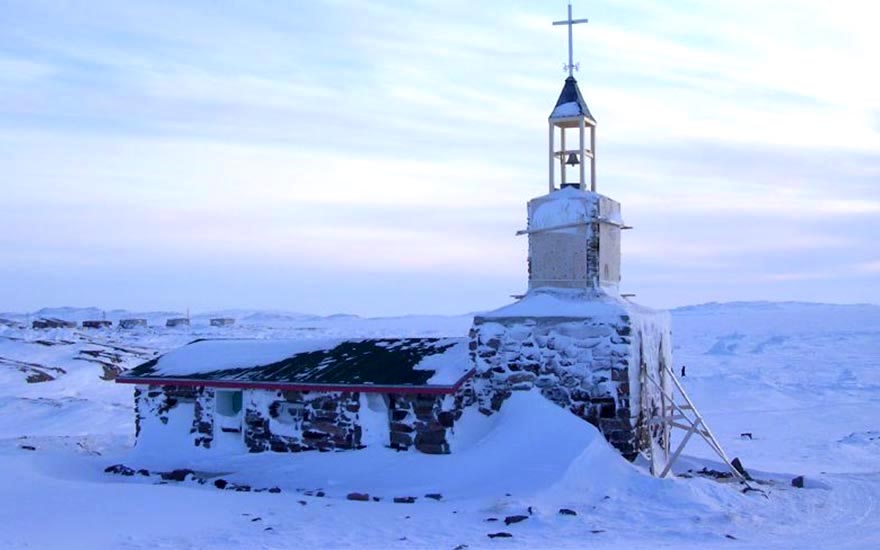 Kugaaruk’s stone church, as it appeared in 2004, when it was photographed by Kelly Lewis. (Photo courtesy of Northernpix)

An historic landmark in Kugaaruk, its old stone church, has been demolished.

Two weeks ago, workers used a cherry picker lift to remove the cross and bell from the top of the church, which dated back to 1940.

Then the building was taken down, with these items and the rocks used in the construction of the church to be saved and stored in a special place.

Bishop Anthony Wieslaw Krotki of the Roman Catholic Diocese of Churchill-Hudson Bay said he was at first shocked by news of the church’s demolition.

“I learned about it the day after the church went down because I didn’t know anything about the plan,” he told Nunatsiaq News.

But Krotki soon learned that the demolition had been in the works for a while, he said, led by the hamlet, which had concerns about children in the community of about 1,000 who liked to play in and around it.

Krotki said rocks were falling off the steeple.

As a safety measure, the hamlet had put a fence up around the church and also surveyed people in the community about what the next step should be.

But the only way to remove the danger was to take the church down, Krotki said.

“I am pretty sure people in Kugaaruk were concerned about their children,” he said.

The church had not been used as a place of worship for years, but had been transformed into a museum.

“It was up to the community to decide [what to do with the church] because they had taken [over] the responsibility,” Krotki said.

A tiny stone building, which was the mission house from the 1940s, was left as “a sort of a reminder of what was there,” he said.

The hamlet said it had no comment to make on the decision to take down the church.

But many weighed in on Facebook, with one poster noting, “It is very sad. If the church had the funds I am sure it would have been rebuilt for historic purpose.”

Later, the hamlet received a government grant to restore the deteriorating church as a historic site, but recently cement work from that renovation had started to fall apart. 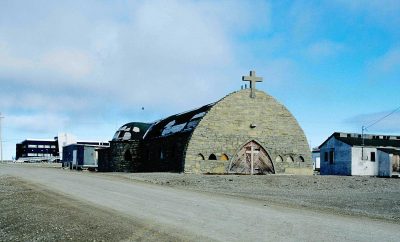 In 2006, another of Nunavut’s stone churches, in Igloolik, was demolished.

Volunteers using dog teams had built St. Stephen’s Catholic Church in 1960. But it was torn down in 2006 because it also presented a safety hazard.

The church’s cornerstone was pulled from the rubble, and was to be preserved as a monument dedicated to those who built the church. Other rubble from the building was to be dropped in the ocean to reinforce the breakwater. 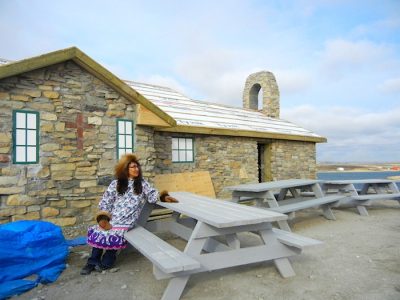 The stone church in the western Nunavut hub of Cambridge Bay almost met a similar fate after it was set on fire in 2006 and gutted by the blaze.

After Steinmann’s arrival from northern Quebec in 1953, he worked with local parishioners and two fellow missionaries, Fathers Lemer and Menez, to build the church.

They used seal oil and clay as mortar and broken rocks, which are plentiful around Cambridge Bay, for the walls.

Built for warmth, the church retained heat with an insulating layer of caribou fur between two layers of stone walls.

In 2014, the Cambridge Bay Coast Guard auxiliary was able to carry out $100,000 worth of renovation work. Some work still remains to be carried out.