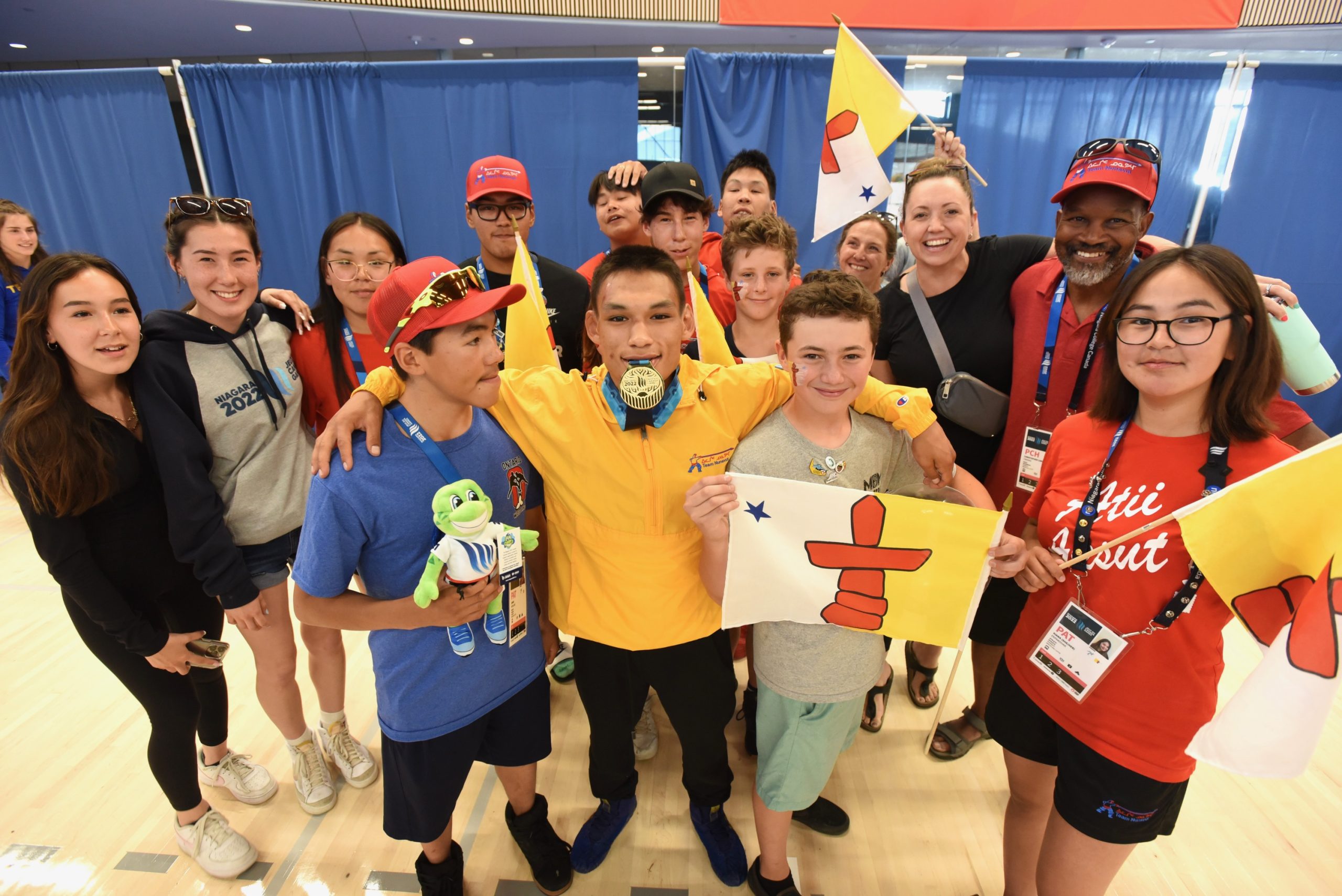 With his gold medal in one hand and the flag of Nunavut in the other, Eekeeluak Avalak made Canada Summer Games history Thursday.

In an emotional match that, when it was over, had the entire gym on its feet cheering, the 18-year-old wrestler from Cambridge Bay became the first Nunavut athlete to ever win gold at the Canada Summer Games.

“Nunavut! Stand up! This is not only my moment, this is all of our moment,” he shouted afterward, talking with reporters.

Not only was it Nunavut’s first-ever gold, it was only the second medal of any kind a territory athlete has won at the Canada Games since Eugene Dederick captured bronze in judo in 2007.

After Avalak won, he ran a lap around the wrestling mat holding the Nunavut flag, then jumped into the arms of his coach, Chris Crooks, with the crowd cheering in a standing ovation that lasted for more than a minute.

Avalak shared the crowd’s emotion: It would have been his late brother’s birthday a few days ago, and he had dedicated his effort at the games to him.

In an interview, he spoke a few words in Inuktitut, then said “that means brother, I love you. His name was Joanasie. My older brother. He would have been 27. 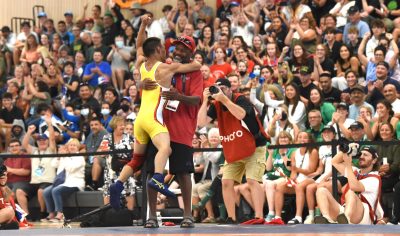 The gold-medal match lasted the full two rounds but Avalak was in charge throughout. He held the centre of the ring, keeping his opponent, Fred Calingay of Alberta, to the outside and on the defensive.

To get to the gold medal match in the 52-kilogram division, earlier on Thursday Avalak had to beat hometown favourite Zubin Gatta, of nearby Niagara-on-the-Lake. The summer games are being held around Ontario’s Niagara region, about 100 kilometres from Toronto.

For the final, all the Nunavut entourage was in the gym, cheering on Avalak and afterward they exchanged hugs and posed for photos on the gym floor.

“I think he’s like a god to me … when he won, I was like almost in tears,” said wrestling teammate Jonah Kunilusie, from Pangnirtung, after Avalak’s semifinal victory early Thursday.

“He’s the captain of the team at this point,” added wrestler Kaaju Arreak, from Iqaluit. “I was also almost tearing up as well when he won, because he was also representing us as Inuit to win gold.”

Avalak, like the rest of the members of Nunavut’s wrestling team, got to the games despite having nearly none of the advantages athletes from larger provinces and territories have.

Living in Cambridge Bay, he’s at least able to work out with his coach, Crooks, and teammates Jusipi Dimitruk, 14, and Kiana Ekpakohak, 16, one of the female team members.

Other members, like Kunilusie and Arreak, have no other wrestlers or coaches in their communities. They have to train alone, receive some instruction virtually, and travel south to train with the team a couple of times a year.

Despite having the smallest contingent at the games, Nunavut has been a crowd favourite at most events.

When Avalak won gold, there were two or three other matches going on at the same time but the entire crowd stood to applaud him.

Crooks, his coach, said he understands why the audience was rooting for Avalak.

“I think a lot of the wrestling community understands his situation — he doesn’t have many teammates, we live in an isolated community, we don’t have, like, nutritionists …. How far he has come, with what he has done, is mindboggling to the other coaches.”

He said, “for him to beat kids who have five or six different training partners while he has me, an old man, and a 14-year-old boy and an 18-year-old girl … it’s phenomenal.

“Those who know his journey, know the trauma he has been in.”

Crooks and his wife, co-coach Paula Cziranka, took in Avalak to live with them nearly two years ago. Then earlier this year at a nationals event, Avalak’s cousin died by suicide.

The pair have helped Avalak secure a place at Vimy Ridge Academy, in Alberta, to finish his high school education while training with some University of Alberta wrestlers.

After that, they hope, he will go to university.

“For him — and we’ve talked about it the last couple of years — he has goals of trying to make the national team, trying to be an Olympian,” said Crooks.

“In order to do that, he can’t stay in Cambridge Bay … he needs more support.”

Thursday competitions also saw some other notable achievements in wrestling.

Both Kunilusie, in the 56-kilogram division, and Isaiah Angutimmarik, at 65 kg, won their first-ever matches. In the placement competition, Kunilusie finished in seventh place and Angutimmarik ended in ninth place.

In beach volleyball consolation round play, Nunavut’s men’s team of Ian McDonald and Aiden Anawak lost a tight match against Yukon 21-17 and 22-20, while the women’s team of Talia Grant and Shawna Kyak fell to Prince Edward Island 21-11 and 21-13.