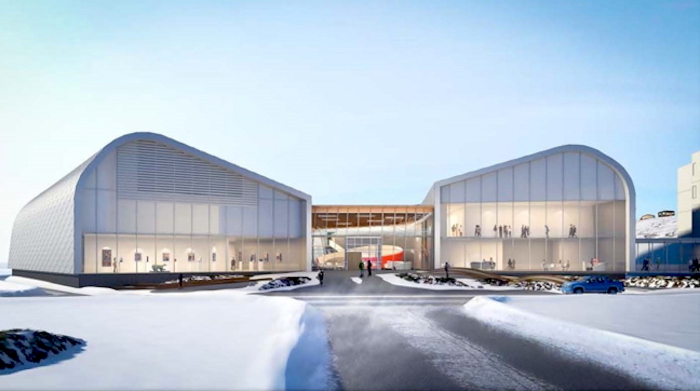 Here is an artist’s rendition of what the proposed Nunavut Heritage Centre would look like. (File photo)

The repatriation of Nunavut artifacts from southern Canada should be fast-tracked: that was the consensus around the table this week at Nunavut Tunngavik Inc’s board meeting in Baker Lake.

Board members approved a resolution that will give the Inuit Heritage Trust about $490,000 to go towards getting its heritage project ready to start construction.

The future Nunavut Heritage Centre, to be located in Iqaluit, comes with an estimated price tag of $70 to $90 million.

So far, the trust has raised $10 million. In 2017 NTI contributed $5 million, which matches the amount the Qikiqtani Inuit Association had already pledged to contribute towards the heritage centre.

The trust now needs to do engineering and design work to get the project shovel-ready.

The $10 million already raised is intended to help the Inuit Heritage Trust leverage the balance of the money needed for the project, according to information shared at the recent NTI board meeting.

The Nunavut Agreement calls for the establishment of a northern facility to conserve Inuit art and artifacts.

Right now, some 7,300 items from Nunavut are sitting at the Winnipeg Art Gallery thanks to an agreement between the gallery and territorial government.

NTI vice-president James Eetoolook and other NTI board members were invited to see the collection at the opening of the Winnipeg Art Gallery’s INUA exhibit at the new Qaumajuq Inuit art centre.

But Eetoolook said he would rather see the Nunavut collection back in the territory.

“We need this centre,” he said.