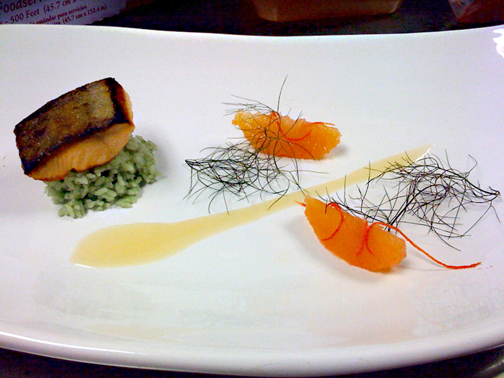 This might be a little different from how most Nunavummiut eat Arctic char, but American chefs are having a field day with Nunavut’s favourite fish. Chicago fishmonger Carl Galvan says his clients are raving about the char he’s brought in from Cambridge Bay and Baffin Island. (CONTRIBUTED PHOTO)

It’s a long way from Cambridge Bay to the tables of upscale Chicago restaurants with names like Bonsoiree and Oceanique.

But Arctic char from the Kitikmeot and Baffin regions is a huge hit with well-heeled American foodies willing to fork over as much as US$50 for an entrée, says Carl Glavan, a Chicago-based fishmonger with the Supreme Lobster and Seafood Company.

Despite hard economic times in the United States, those who can afford it are still clamouring for char because it’s sustainably caught wild fish from waters much cleaner than, say, off the shores of New Jersey.

Char also benefits from being available only sporadically in the summer. And the fact that it’s caught by Inuit in the Canadian Arctic—still unknown country for most Americans—also adds to the appeal, Glavan says.

“It’s the best possible product available,” he says. “Food people like that flock to a story like this. The story, more than anything, sells the fish.”

It may strike some here as strange to think of char as a “story” instead of “food” but the enthusiasm of Glavan and others is fuelling the growth of Nunavut char as high-end American dinner. Glavan buys his char from CleanFish Inc., a San Francisco-based company that specializes in environmentally friendly “artisanal” seafood.

“I’m not a fishmonger. I’m a story-teller. My job is to tell the story of your product,” CleanFish vice president Dale Sims told Nunatsiaq News last year. “I want to introduce this to the finest chefs in America.”

It appears to be catching on. Glavan says he’s moved more than 450 kilograms of char so far this year and that the chefs he deals with love it. One chef told Glavan he sold out of his order in 25 minutes.

“The quality of the fish has been phenomenal,” he said. “They love the fat content on it. They love the nice firm flake and full flavour it has.”

“Any time a chef gets to work with something they’ve never worked with before, they’re all over it.”

Kitikmeot Foods has nearly doubled the amount of char its exporting to the U.S. over, to around 2,100 kilograms this year, said Monique Giroux, co-manager of the Cambridge Bay plant.

The fish is shipped out by air, packed fresh, on ice, in Styrofoam containers sealed with wax. The seasonal fishery employs between four and eight fishers and 15 workers in the plant, Giroux said.

Despite all the buzz, Giroux says Kitikmeot Foods doesn’t plan on increasing its catch. “We don’t over-harvest. We harvest what we need,” she said.

But she said she’s happy to hear her company’s product is making waves down south. “I think it’s wonderful. We’ve even been in the New York Times.”

In fact, Glavan’s so enamoured with Nunavut char that he’s thinking about heading to Nunavut to do a film with Chicago food writer Michael Gebert, who produces the food podcast series Sky Full of Bacon.