Music, drama, fashion and comedy were all on display 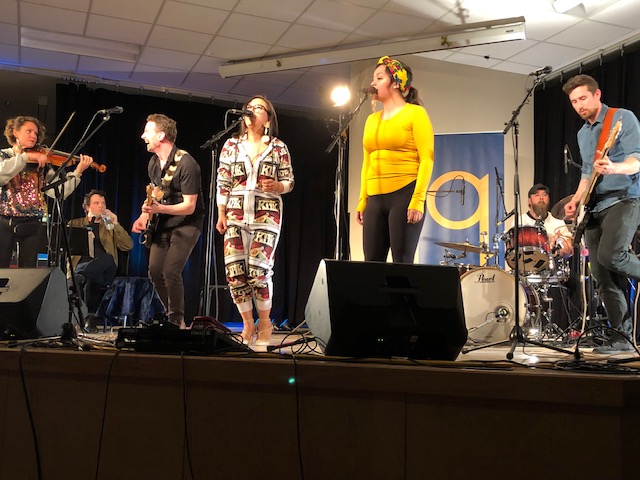 The Jerry Cans, with Nancy Mike (third from left) in her Klik onesie, perform at Inuksuk High School on Thursday, April 25. (Photo by Patricia Lightfoot)

A lucky audience of Iqalungmiut and a sprinkling of southern visitors enjoyed a sparkling evening of music, comedy, fashion and conversation with Nunavut artists last Thursday at Inuksuk High School in Iqaluit.

The event was the taping of an episode of CBC radio’s q with Tom Power to kick off Nunavut Music Week, which brings together Nunavut musicians, including newcomers and more experienced performers, and music industry professionals from the south.

It was an eclectic and entertaining occasion, which felt like a gathering of friends and family.

Don’t despair! The show will be broadcast on CBC radio during the week of May 13, and video from the event will be posted on CBC’s website.

You can look forward to musical performances in numerous genres, including Arctic Soul by Josh Q and the Trade-Offs, who had the audience singing along to “You make me go out”; hip hop by Mister; Indie folk by Aasiva, featuring throat singing and the ukelele; Indie rock by the Jerry Cans, who played a track from their new album, and mesmerising throat singing combined with electronic dance music by Riit. 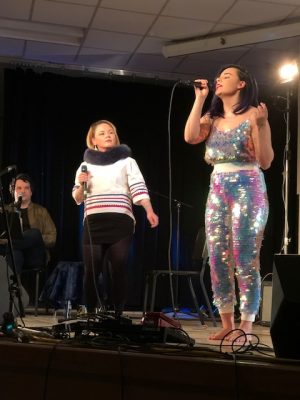 Riit sparkled, alongside Kathleen Merritt and Tom Power of CBC Radio q, on stage in Iqaluit on Thursday, April 25. (Photo by Patricia Lightfoot)

The array of genres speaks to the current breadth and depth of the Nunavut music scene.

Josh Q recounted how it really used to just be him and the Jerry Cans in Iqaluit, but now there are a lot of talented younger performers on the scene.

Nancy Mike of the Jerry Cans described the early days of the band when they burned their first CD and did their own artwork, so they could take copies of their music to a festival in Yellowknife.

She said they had to figure out how the music business works.

Now they’re at a point where they have their own record label, Aakuluk Music, and there’s Nunavut Music Week to help upcoming performers.

Laakkuluk Williamson Bathory, artistic director of the Qaggiavuut arts collective, spoke of the need to develop a dedicated performance space in Iqaluit.

“It’s the arts and hunting that have allowed us to keep being Inuit,” she said.

Fashion designer Victoria Kakuktinniq described her journey from taking a traditional sewing program in Rankin Inlet in 2012 to showing her garments, in which she tries to “fit a traditional background into modern simple, classy fitted parkas,” at the Paris Fashion Week.

Nunavut’s stand-up comedy scene was represented by Peter Autut, who entertained the audience with his perspective from Chesterfield Inlet on the amount of time he was allotted for his set.

CBC radio q will be broadcasting this Nunavut-themed show during the week of May 13.