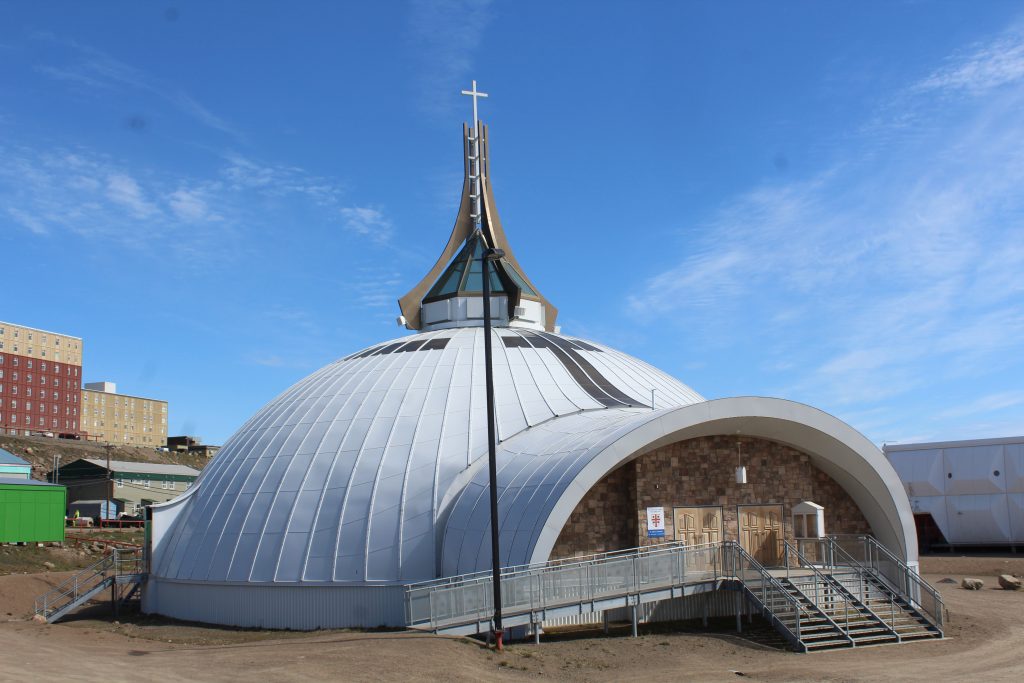 Indoor gatherings of up to 50, or half the capacity of a building—whichever number is lower—are now allowed at Nunavut’s places of worship, such as St. Jude’s Cathedral in Iqaluit. (Photo by Meagan Deuling)

This was announced today by the Government of Nunavut as the latest steps to modify the public health measures in place to minimize the risk of COVID-19.

The plan to ease public health restrictions is laid out in what is called Nunavut’s Path. The first phase was enacted on June 1, and the restrictions have been eased further every two weeks since then.

Starting today, day camps and youth centres are allowed to resume operations, and the limit for some official indoor gatherings is now 50 people, or half of the capacity of the building, whichever is less.

This includes places of worship, conference facilities, community halls, rental meeting spaces, and gatherings organized by the Government of Canada, the Government of Nunavut, municipal corporations or regional Inuit organizations.

“If you make the choice to participate in a large gathering or attend an indoor event, or even meet up with friends for dinner, please also choose to be responsible and choose to take actions that will keep yourself, your community and your territory safe,” Patterson said.

This means keeping six feet away from other people, washing your hands, not touching your face, frequently sanitizing areas that are often touched, like door knobs, and wearing a mask in situations when distancing isn’t possible.

And if you don’t feel well, stay home.

There are still no confirmed cases of COVID-19 in the territory. In total, there have been 1,418 investigations into possible cases, and there are 140 outstanding investigations.

Nunavut is still not in a position to consider lifting the requirement for people to go into isolation for 14 days in hotels in one of four southern cities before returning to the territory.

There would need to be better capacity to test for COVID-19 in Nunavut before that would be considered, Patterson said. Right now it take six or seven days to get test results back, on average, whereas in the south it takes two to four days.

In addition, Patterson said he keeps an eye on transmission rates in southern areas that Nunavummiut typically travel through.

“Although worldwide the numbers don’t look very good, when you look at the curve of the number of infections in southern Canada, there’s no doubt that the curve is flattening, so there’s reason to be optimistic at this time,” Patterson said.

The last two things Patterson said he looks at when he’s considering the isolation requirement are “completely out of our control”: effective treatments against COVID-19 and a vaccine. Currently, neither is an option.

The GN also announced today that it’s expanding the Nunavut essential workers wage premium, which was announced at the end of May.

The premium was initially a wage top-up for workers who provide health and social services to vulnerable people, and who make less than $25 an hour.

The qualifications have been vastly expanded. Now taxi companies, restaurants, building maintenance and cleaning services, hotels, legal services, insurance companies and mortuary services, for example, may be eligible to apply for a wage top-up for their employees.

Nunavut’s minister of finance, George Hickes, said that the federal government is providing Nunavut with “approximately $4 million” for the program.

Hickes said that he expected more organizations in Nunavut to apply during the first phase. He had to negotiate with the federal government to change the parameters of the program for Nunavut, because the minimum wage here is higher than in other parts of the country.

Employees who are eligible can receive wage top-ups retroactive to May 1, for 16 weeks past that date.