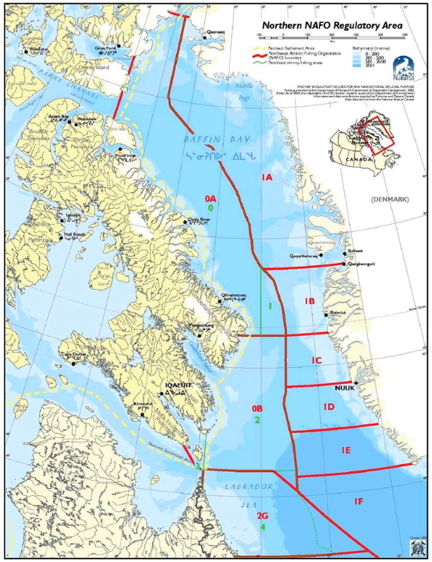 A study commissioned by the Nunavut Fisheries Association found that its members contribute over $1 million to Nunavut’s GDP, and that contribution would significantly increase if they were allowed a greater share of the quota in the territory’s adjacent waters. This map shows the zones within which the NFA’s members have quotas. (File photo)

Members of the Nunavut Fisheries Association contributed $112 million to the territory’s gross domestic product and created nearly 1,000 full-time jobs in 2019.

This comes from an independent study, commissioned by the association.

“We’ve always been saying we’ve had a lot of impact, and we’re landing a lot of really high value in the way of fish. But to get an independent study done was what we really needed to do to show that in the proper way,” said Brian Burke, executive director of the NFA.

The study, The Economic Impact of the Nunavut Fisheries Association’s Members, was done by OMX, which specializes in analyzing the economic impacts of different sectors.

Burke said the impact of NFA members on Nunavut’s economy isn’t easily appreciated by many, given the lack of a deep-water port in the territory that’s usable by the offshore fishery.

“It was very difficult to get a handle on the impacts of our industry given that we’re not able to land any of our fish in Nunavut,” Burke said.

“They get landed in Greenland or Newfoundland, so it gets lost in the statistics. So this was about going out and getting that.”

The lack of a port in Nunavut, and the current construction of one in Iqaluit, has been a long-standing issue for the NFA.

Its members have access to fishing zones that stretch from Nunavut’s shoreline to the middle of Baffin Bay, and as far north as Ellesmere Island.

With Iqaluit’s location at the basin of Frobisher Bay, on southern Baffin Island, it’s no closer to those productive fishing grounds than ports in Newfoundland and Greenland. Qikiqtarjua has been proposed as a port site by the NFA and its far-flung members.

These companies are owned by Nunavut hunters and trappers organizations, communities, and the Qikiqtani Inuit Association, in the case of the Qikiqtaaluk Corp.

Over 900 full-time equivalent jobs are created by the member companies in a year, the report states. Those are both direct and indirect jobs—like those in the service sector or marketing.

The study also found that direct employees of these companies, in 2018, were 40 per cent Inuit.

“All of the members are really dedicated to bringing that number up,” Burke said. “It has come a long way and that continues, but it’ll come with more training, and training for higher level positions on the vessels.”

Currently, he said the vast majority of positions held by Inuit are lower level, such as bridge watch or crew, but with more training, mentorship and years of experience he hoped to see that change.

Members of the association have invested $65 million in training since 2005 through the Nunavut Fisheries and Marine Training Consortium. That’s seen 250 programs offered and 1,200 Inuit trained.

“Forty per cent, we’re pleased with that, but that’s one of the main areas of focus—direct employment and what else can the members do to help support the local communities,” Burke said.

“That’s everything from research and development programs to directly paying [hunters and trappers associations].”

But in releasing the results, the Nunavut Fisheries Association was less celebratory than it was stern.

The association called on the government to recognize the value of the industry and its need for better support.

“To date our members have developed their fishing capacity with minimal financial support from the federal government, unlike many other Indigenous fisheries that have benefited from hundreds of millions of federal funding,” said Sakiasie Sowdlooapik, NFA’s secretary-treasurer, in a March 11 news release.

That means support in terms of allocations, Burke said—giving a more equitable share of Nunavut’s adjacent waters back to Nunavut—as well as support for updating fleets and other capital costs.

On the Atlantic and Pacific coasts, he said billions of dollars have been spent to develop Indigenous fisheries. But Burke and Sowdlooapik said that sort of support hasn’t been shown to Nunavut.

To date, the study showed that NFA members have spent a combined $100 million on acquiring fishing vessels.

“If you look at the $100 million there, that’s money our members have invested. None of that has come from government, we’ve had to develop the industry on our own,” Burke said. “It comes down to equity.”

The results of the OMX study, Burke said, prove that Nunavut fisheries are worth putting money into.

“By having this report, it’s showing they get good value in terms of their investment,” Burke said.

What the survey also points out is how much greater an impact the industry would have in the territory if Nunavut had a larger share of its surrounding waters—another long-time request of the association.

Nunavut fisheries have 100 per cent of the share of turbot caught in the waters of the northern 0A zone, which stretches from south of Qikiqtarjuaq up to Ellesmere Island.

Directly south of that, in the 0B zone, which continues to the southern tip of Baffin Island, NFA members have only a 48 per cent share of the turbot quota.

The remainder is largely divided up between southern commercial fisheries, Burke said.

And Nunavut fisheries have only a 38 per cent take of shrimp quotas in Nunavut’s adjacent waters.

Through their study, OMX found that increasing Nunavut’s share of both shrimp and turbot in all adjacent waters from the current combined share of 52 per cent to 90 per cent would contribute an additional $62.7 million per year to Nunavut’s GDP.

It would also create an additional direct and indirect 528 jobs.

“The one thing that has really come out of this is the galvanizing of support from stakeholders in Nunavut,” Burke said.

“We really have now the Government of Nunavut, Nunavut Tunngavik Inc., the Qikiqtani Inuit Association, on side. We’re all speaking with the same voice, sharing the potential impacts of this industry for the territory and its importance, which is really a positive development. At least worth the cost of the study.”