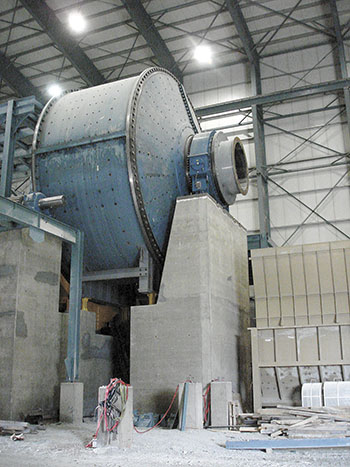 Three of these giant 4.4 MW turbines will power up Nunavut’s Meadowbank mine when it starts producing gold early in 2010. (PHOTO BY JANE GEORGE) 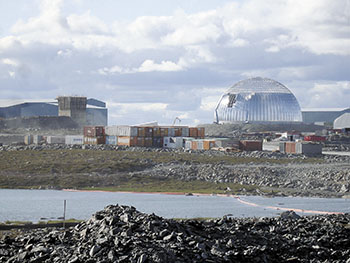 The rush is on to put Nunavut’s first gold mine into production by the start of 2010. A shiny silver dome (to the right), now under construction at Agnico-Eagle’s Meadowbank mine near Baker Lake, will protect gold-rich crushed rocks from the elements after they leave the crusher (to the left) and before they go to the large blue mill (to the far left) for processing. (PHOTO BY JANE GEORGE)

MEADOWBANK MINE (APUTINAAQTUQ) — When Agnico-Eagle’s Meadowbank mine starts production early in 2010, it will become Nunavut’s first gold mine— and the territory’s sole operating mine.

Many other mining companies have slowed or shut down their Nunavut projects, but Agnico-Eagle is already planning Meadowbank’s official opening next June.

“Our deadline is to put the mine into operation by the end of the year, so that in the first trimester we are in production,” said Denis Gourde, general manager of Meadowbank.

Problems such as delays in offloading barges in Baker Lake, a leaky dike, and waits for authorization to expand the site’s runway for jet traffic may yet push back its scheduled startup.

But, after sinking about $700 million into the project, the management at Agnico-Eagle, a Quebec-based gold producer, is eager to start churning out gold at the mine.

So far, all the company has done is spend money, not earn it, with a total of $16 million going to local contractors alone by early 2009.

Among those contactors that will profit this year is the newly-formed Qamanittuaq Sana, a joint venture between the Qamanittuaq Development Corp. and Fernand Gilbert, a major Quebec-based civil-engineering contractor.

Once in production, Agnico-Eagle stands to make a lot of money from Meadowbank’s three open pit mines.

Each ounce of gold will cost $300 to produce, but the profit margin remains high. That’s because gold has held its value even as other metal prices have nosedived.

An ounce of gold is now selling for more than $950.

The most conservative estimate of Meadowbank’s production is that the mine will produce an average of 350,000 ounces of gold a year over the current estimated lifespan of mine’s nine or 10 years.

This means the mine will produce at least $227 million a year for Agnico-Eagle, after accounting for production costs.

The company has been putting lots of effort into exploration, to find more reserves around Meadowbank and to look for other promising deposits elsewhere in the region, Gourde said.

Declining fuel costs over the long-term may also help Meadowbank make even more money than forecast.

And, unlike northern projects for zinc, nickel or iron, which require ships to carry out ore, flying out 10-ounce gold ingots or bars from Meadowbank will be a security headache, but still a relatively cheap and easy move.

Until the financial pressure to bring in revenues is met, projects such as buying a computerized simulator for heavy-equipment training will wait.

The company did send 18 heavy-equipment operators from Nunavut for training in Ontario. The graduates then received on-site training and will be trained to operate more varieties of heavy equipment used at the mine site, Gourde said.

And a new batch of aspiring heavy-equipment operators and nine potential mill operators are also off on training programs in the South.

But nothing is in place on-site to train Inuit in administrative or management roles at the mine or to encourage experienced workers to move into supervisory positions.

Some of Meadowbank’s profits will pay to bring the land around the mine site back to its natural state — or as near to that as possible— after operations stop.

Environmental impacts from gold mining can include air pollution, depletion of water tables and seepage from holding ponds containing heavy metals and cyanide, a toxic compound used to separate the gold from rock.

Meadowbank already has water purification and recycling systems in place to limit the damage.

For the moment, the mine’s environmental impact is easier to measure in kilos of fish, about 1,123 kilos, to be precise.

Last summer, more than 3,000 lake trout, Arctic char, white fish and turbot were fished out of a lake that had to be drained for an open pit mine.

The fish, including a 20-pound lake trout, were frozen and handed over Baker Lake to be distributed among the population.

After Meadowbank ceases operations, the lake, and any others drained, will be restored back to its natural state, says Agnico-Eagle.

So far, constant monitoring of wildlife hasn’t found any negative impacts around the mine site, where caribou, fox, ptarmigan, sandhill cranes, musk-oxen and grizzlies are common sights.

Despite the noise and dust, monitoring found “a marginal increase” in the number of caribou and “significant increases in musk-ox abundance.”

Agnico-Eagle, which acquired the mine from Cumberland Resources in 2007, also operates a gold mine in northern Quebec and in northern Finland.