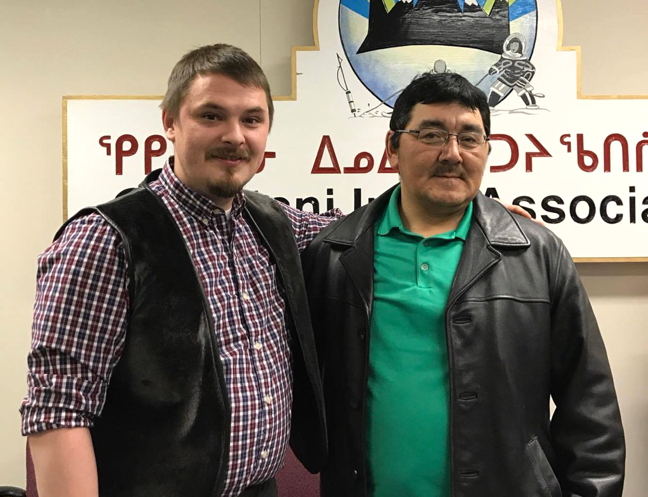 Unofficial results for the Qikiqtani Inuit Association’s election on Monday show Olayuk Akesuk, seen here to the right of QIA President P.J. Akeeagok in 2016, narrowly beating challenger Jerry Natanine in a race to retain his seat as vice-president. (File photo)

Olayuk Akesuk appears to have held onto his position as vice-president of the Qikiqtani Inuit Association, based on unofficial results from Monday’s election. However, his 10-vote margin of victory was so slim it triggered a mandatory recount.

Results won’t be official until the association’s returning officer in Iqaluit receives all the ballots and verifies the results.

The unofficial results of the election, held on Monday, Dec. 14, show Akesuk with 645 votes, against Clyde River Mayor Jerry Natanine, who received 635 votes.

The other candidates for vice-president were Jaco Newkingak and Cornelius K. Nutarak.

Levi Barnabas is the association’s new secretary/treasurer. He previously served as a community director. Barnabas, who received 714 votes, was up against Enoki Irqittuaq, who received 317 votes, and Johnny Mike, who received 542 votes.

See the unofficial results on the Qikiqtani Inuit Association website.

This story has been updated to reflect the fact that the election results are unofficial.

As well, an earlier version of this story stated that Levi Barnabas was the incumbent secretary/treasurer, when in fact he previously served as a community director.