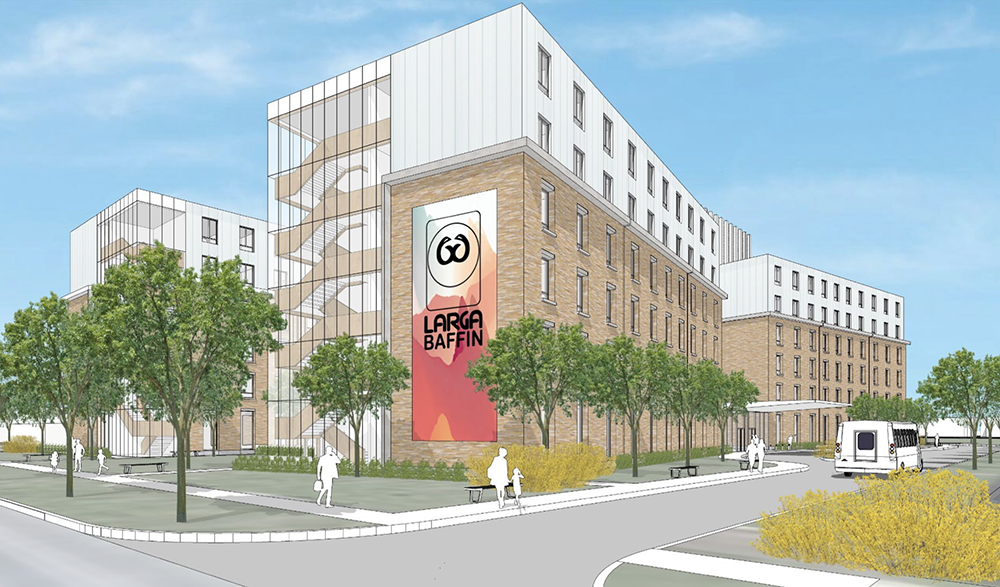 An application to build a new 220-room Larga Baffin facility, depicted in this artist’s drawing, has been carried over to Ottawa city council after being approved by the city’s planning committee on June 23. (Image courtesy of Larga Baffin)

Developers behind an application to build a new Larga Baffin facility could learn if their plan is a go when Ottawa’s city council discusses the proposal next week.

Councillors will consider Larga Baffin’s application to open a 350-bed facility on July 6, the final meeting before council breaks for the summer, said planning committee co-chairs councillors Scott Moffat and Glen Gower in emails to Nunatsiaq News on Monday.

The facility’s current location on Richmond Road can accommodate 195 visitors but is often over capacity, with many clients having to be housed in nearby hotels.

The new centre would be built at the intersection of Hunt Club Road and Sieveright Avenue.

On June 23, an application from developers Fotenn Planning and Design was approved by Ottawa’s planning committee, carrying it forward to city council for final approval.

Hours after the committee’s decision, city councillor Diane Deans — who spoke during the virtual meeting and represents the Gloucester-Southgate ward where the new facility would be built — made an announcement, saying she no longer plans to run for mayor in October’s municipal election.

Deans said she will also not seek re-election as a city councillor.

She said her decision was prompted by “both personal and professional reasons.”

“After careful consideration, I have concluded that the next mayor will need to make an 8-year (two term) commitment to the job,” Deans said in a statement released to reporters.

“Four years will not be sufficient to get this city on a better path. Regrettably, I do not feel I can make a commitment of that length to the people of Ottawa.”

Deans did not return multiple requests for comment for this story.

She was vocal in the months leading up to last week’s meeting in saying she did not support key components of Larga Baffin’s application.

That included the six-storey, 22-metre height of the building and the location of an entrance point on a residential street, citing constituents’ concerns about the size of the facility and increased traffic in the area.