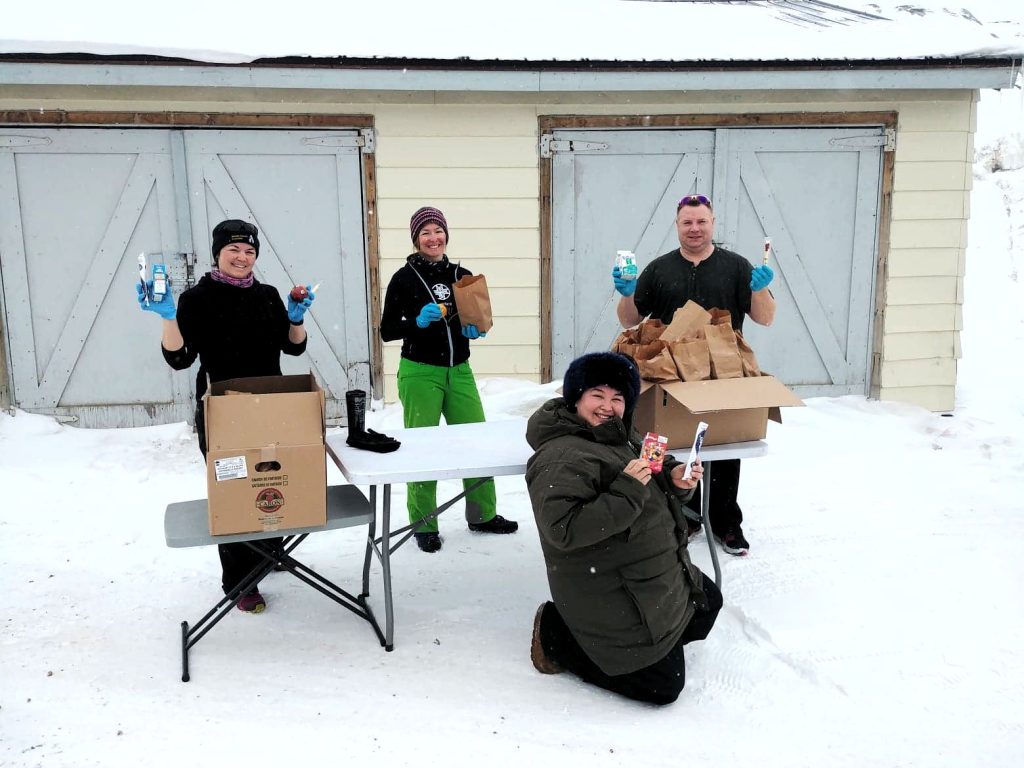 Marsha Rhodes, Charlene Paterson, Neevee Wilkins and Jason Rochon give out breakfasts for children in Iqaluit at the end of last March, following the closure of schools due to COVID-19. The Breakfast in a Bag program is run by one of 30 groups that received food-security money from Ottawa recently. (File photo)

The federal government played head waiter to Nunavut this month.

Ottawa has ladled out $1.1 million in emergency food-security money to 30 hamlets, food banks and community-based groups, from a pot of cash that Northern Affairs Minister Dan Vandal announced on Oct. 2 on behalf of Agriculture Minister Marie-Claude Bibeau.

“We understand that the pandemic has put people through some very difficult times in remote communities and food insecurity is an issue there at the best of times. When there’s a lockdown, it becomes even more important,” Vandal said in an interview with Nunatsiaq News.

A long list of organizations, including Iqaluit’s Breakfast in a Bag program, the Qajuqturvik Community Food Centre, the Niqininik Nuatsivik Nunavut Food Bank, YWCA Agvik Nunavut, the Nunavut Literacy Council, and numerous schools and hamlets across the territory have each received a share.

“The money was committed about a month ago. In the last several weeks the money started flowing. I believe the organizations have already received the money,” Vandal said.

Nunavut’s $1.1 million comes out of a $100-million emergency fund that Prime Minister Justin Trudeau announced this past April, at the height of the pandemic’s first wave.

To figure out how to distribute the money, the federal government used existing national and regional food-security organizations, who worked with civil servants.

“We have some very good civil servants on the ground that are well-connected to different organizations. There’s the association of food banks, there’s the YWCA. It was done administratively using existing contacts and with a lot of local input,” Vandal said.

The federal government divided the $100-million emergency fund like this:

• Up to $5 million for local organizations, including $800,000 for La Tablée des Chefs in Quebec.

In addition to the money announced on Oct. 2, Ottawa has also spent the following:

• $17.3 million for the governments of Nunavut, the Northwest Territories and Yukon to help territorial governments support northern air carriers.