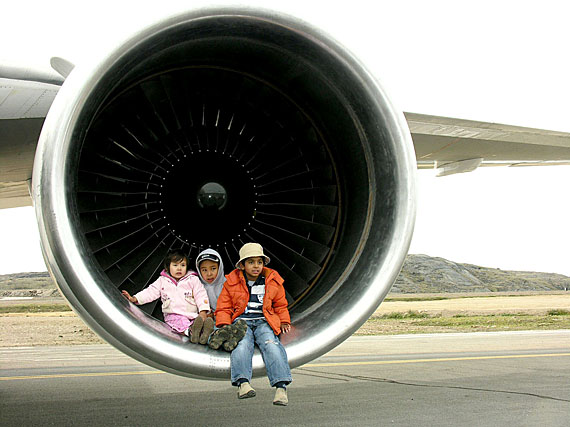 Three Iqaluit children perch inside one of the huge engines that power First Air’s newly-acquired Boeing 767 223 super freighter, which the airline displayed at the Iqaluit International Air Show on Aug. 22. American Airlines bought this aircraft from Boeing on Nov. 10, 1983 and used it to offer passenger services until 2006, when the financially-troubled airline put it into storage at a facility in Roswell, New Mexico. In May of 2007, AA sold it to ABX Air Inc. of Wilmington, Ohio. ABX converted it into a freighter, then sold it to First Air earlier this year. First Air, which registered the aircraft this past June 4, now uses the 26-year-old freighter to move large amounts of cargo between Ottawa and Iqaluit several times a week.