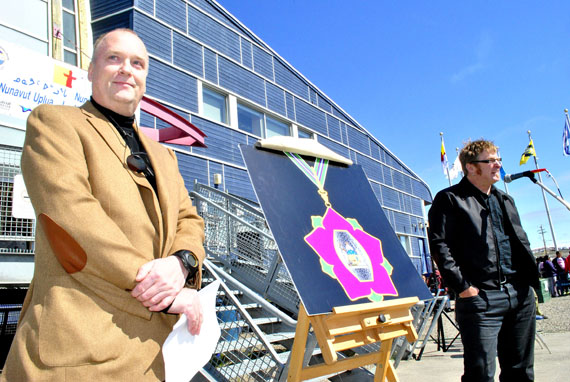 Iqaluit artist Claude Roussel (right) and Robert Kilpatrick, the chief justice of the Nunavut court, with Roussel’s winning design for the Order of Nunavut medal, which they unveiled July 9 in Iqaluit at Nunavut Day celebrations held behind the legislative building. The Order of Nunavut, created through a piece of legislation that received assent on Dec. 8, 2009, is now Nunavut’s highest honour and is to be awarded to people who provide outstanding contributions to the cultural, social or economic well-being of Nunavut. An advisory council comprising the speaker of the Legislative Assembly, the senior judge of the Nunavut Court of Justice and the president of Nunavut Tunngavik Inc. will make recommendations on who should receive the Order of Nunavut. Roussel’s winning design, for which he received a prize of $5,000, features Nunavut’s coat-of-arms set against Nunavut’s floral emblem, the purple saxifrage. (PHOTO BY JIM BELL)