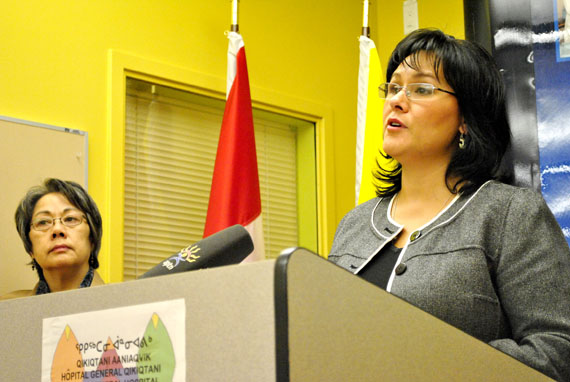 Leona Aglukkaq, the federal health minister, with Eva Aariak, the Nunavut premier, announcing a two-year extension of a special health funding deal for the three northern territories that was scheduled to expire this year. The three territorial governments negotiated the agreement with Ottawa in 2005 after complaining that the Paul Martin government’s 2004 health funding agreement with the provinces and territories did not meet the needs of jurisdictions with small populations. Under the extension, the three territories will share $60 million over two years. Of that, Nunavut will get $20.4 million to help pay medical travel costs, plus $8.6 million for various service improvement schemes and will share in a $4 million fund for “pan-territorial projects.” (PHOTO BY JIM BELL)