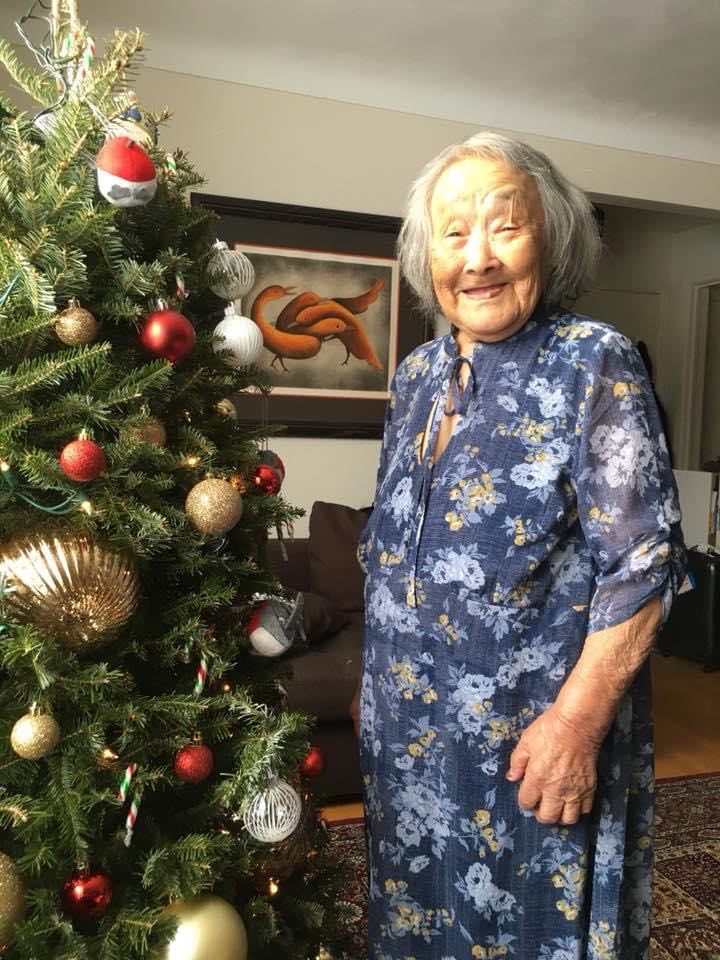 ‘She was a very good example of Inuit, when you lose so much, how to remain strong,’ says daughter Martha

When Letia Kyak moved to a tiny outpost on the southern tip of Ellesmere Island in 1951, she went to work doing what she did best — sewing uniforms out of caribou hide for the RCMP officers stationed there, and her husband, a special constable.

Tununiq MLA David Qamaniq paid tribute to Kyak’s life during the recent sitting of Nunavut’s legislative assembly. She was a master seamstress who spent years at the Craig Harbour RCMP detachment, near Grise Fiord. 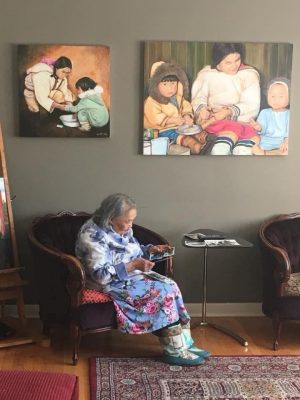 Beneath portraits that her daughter, Martha Kyak, painted for her, Letia Kyak sits in Martha’s Ottawa living room in 2018, looking at old family photos. (Photo courtesy of Martha Kyak)

Kyak died on June 28 after breaking her hip two weeks prior, while in care at Embassy West Senior Living in Ottawa, said Martha Kyak, the youngest of Letia’s 11 children.

At around 18, Letia married Lazaroosie Kyak, who served as an RCMP special constable for nearly three decades.

Martha said her mother and father were moved to Craig Harbour, but the federal government doesn’t consider them to have been relocated because it was for Lazaroosie’s work.

“Up there, they were all alone: one family and two RCMP [officers],” Martha said. “And they had to prepare for the people that would be relocated.”

Letia would sew caribou clothing for RCMP officers in exchange for little pay, in addition to sewing for her husband and children, Qamaniq said, and preparing food for families who joined them in the High Arctic.

“[Letia] had to treat them like family and make sure that they are well taken care of,” Martha said.

The Kyaks moved back to Pond Inlet in 1960, Martha said, where Letia lived until moving to Ottawa in February 2017.

Letia was born in Usualuk, near Pangnirtung, in late December, around 1922 — which would make her about 98 when she died. 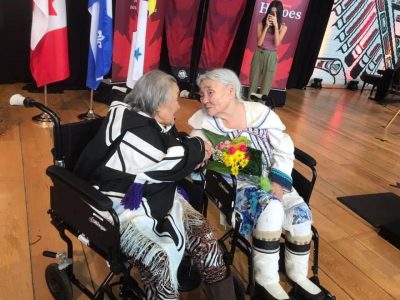 Letia Kyak talks with her childhood friend, Qaapik Attagutsiak, an elder from Arctic Bay, during an honour ceremony in January 2020 for Attagutsiak’s efforts during the Second World War. Attagutsiak gathered animal remains to be repurposed into fertilizer and ammunition. (Photo courtesy of Martha Kyak)

“At that time, when [the government was] issuing birth certificates, when they were registering Inuit, a lot of them were guessing what year, what month and what day they were born,” Martha said.

But Martha said if you were to ask Letia’s childhood friend, elder Qaapik Attagutsiak, who celebrated her 100th birthday in 2020, she’d say Letia was a few years older than her.

Letia didn’t know her father, as he died as a young man, and was adopted and raised by her grandmother in Pond Inlet in her teens, Martha said.

She remembers her mother as being chatty, selfless, strict and loving — characteristics she has learned to appreciate over the years.

There was no smoking, drinking, swearing or gossiping allowed in the Kyak household when Martha grew up. During the long, bright days during the Pond Inlet summer, Martha said she and her siblings were inside at bedtime and able to hear children playing in the streets.

“She had her values that were very high and expected the same for her children,” Martha said. “And if you didn’t listen, you’d get a slap or something.”

Letia was active in the community, teaching Sunday school in Pond Inlet for many years and holding sewing lessons.

“She attended every event. She was a social butterfly. She would go everywhere and talk to people,” Martha said.

If she needed help getting to those events, passing drivers knew she’d try to stop them for a ride.

“She would stop you if you’re in a car, truck or even in a four-wheeler with many kids,” Martha said, with a laugh. “She’d stop you and she’d get on.”

To Martha, her mother was a courageous role model, not only for her, but for all Inuit.

Letia experienced many tragedies in her life, Martha said. Her husband died of a sudden heart attack; she lost seven of her 11 children to tragedies that included murder, a plane crash, freezing and the residential school system. But she carried on.

“She was a very good example of Inuit, when you lose so much, how to remain strong,” Martha said. “And a lot of Inuit saw her and were able to cope with their loss knowing that she lost her family and was able to learn.”

Letia has family across Nunavut, mainly in the Qikiqtaaluk region, and in Qaanaaq, Greenland.

“Family was so important to her.”