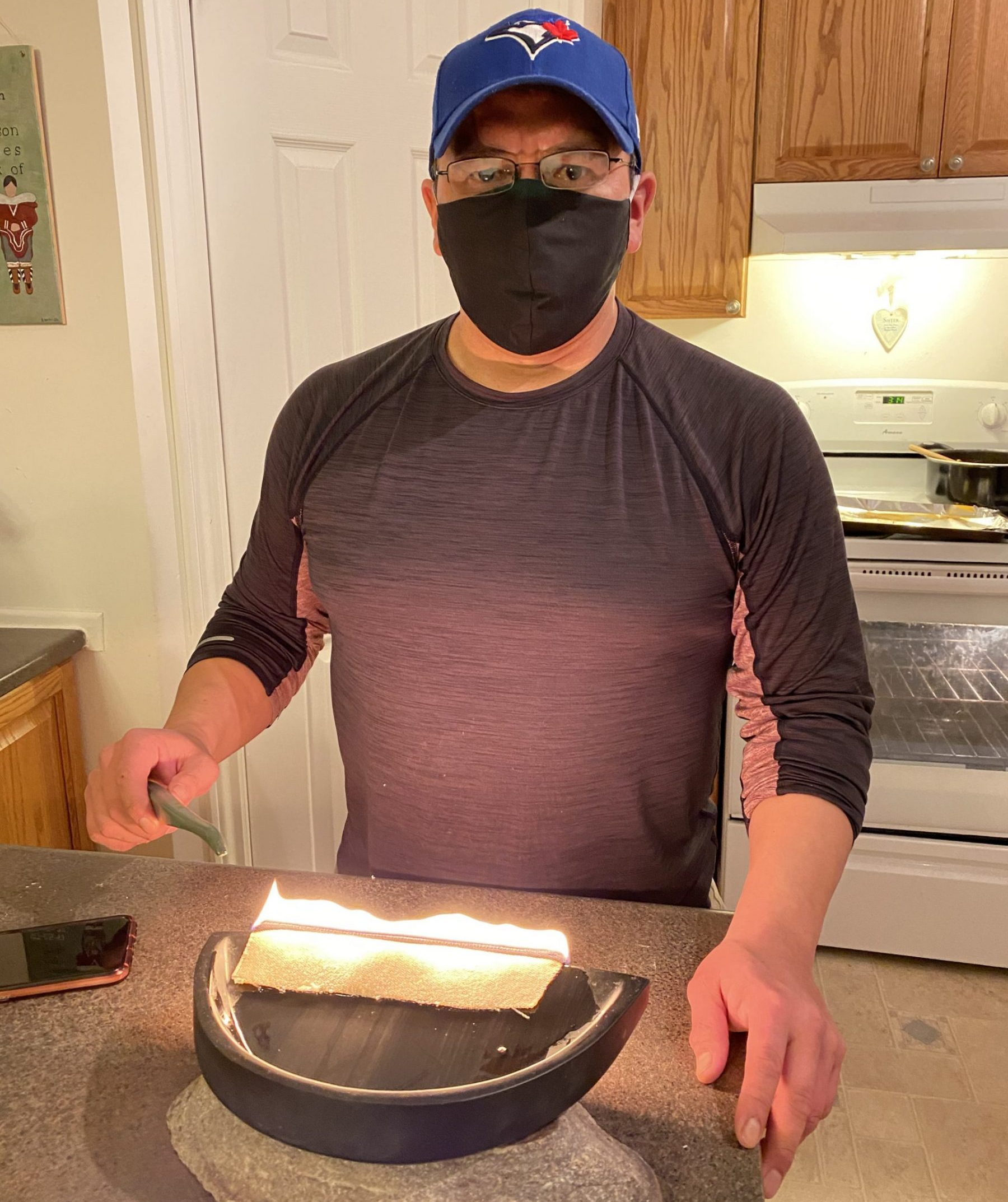 John Eetuk shows off his wife’s lit qulliq. Eetuk will light the qulliq again at 8 p.m. EST and post a video to Facebook. (Photo submitted by John Eetuk)

Lighting of oil lamps at 8 p.m. a show of support for 142 people in territory with virus

Inuit around the circumpolar world will be lighting their qulliit tonight in support of the people in Nunavut who tested positive for COVID-19. Across the territory, there are 142 active cases of the disease as of Tuesday.

The idea came from John Eetuk, who was looking at his wife’s qulliq when he was watching TV Monday night.

“I need to light this qulliq on Facebook and see how far we can get to show support … to all the people who are going through the COVID-19 stuff,” he said.

A qulliq is an oil lamp, traditionally carved out of soapstone, that Inuit use for heat and warmth in the winter. It’s also used ceremonially — an elder will light a qulliq at the start of events or concerts.

Eetuk, a radio personality, lives in Iqaluit and hosts Qulliq, CBC Nunavut’s morning program. He tweeted his idea, and spoke about it on the radio Tuesday morning.

“Surprisingly, I got way more responses than I expected,” he said.

He has heard from people all over Canada, as well as Greenland and Alaska, who want to light a qulliq at the same time, he said.

Eetuk plans to light his wife’s qulliq at 8 p.m. EST, take a video of it, and post it to the Circumpolar World Hunting Stories page on Facebook.

“I chose that because there are people from pretty well all over the world that are members,” he said.

Eetuk wants people to light their qulliit and post pictures and videos of them to the page, too.

He’s heard from people who don’t have a qulliq, but said they will light a candle instead.

It’s a way to show people support who are experiencing COVID-19 in their communities, he said.

“It’s just a beautiful thing, too, the qulliq when it’s lit,” Eetuk said.

Three Nunavut communities in the Kivalliq region have active cases of COVID-19 — Arviat, Whale Cove and Rankin Inlet. Arviat has 107 positive cases after adding nine new cases, the territory’s Health Department reported Tuesday. Nunavut added 10 new cases, bringing the total of active cases to 142 across the territory. The entire territory is in the middle of a two-week lockdown in an attempt to prevent the virus from spreading.

Eetuk wants to show people in the three affected communities that “they’re in our prayers, and we support them 100 per cent.”

“We hope they continue to do what they’re told … and the numbers will start decreasing eventually,” he said.