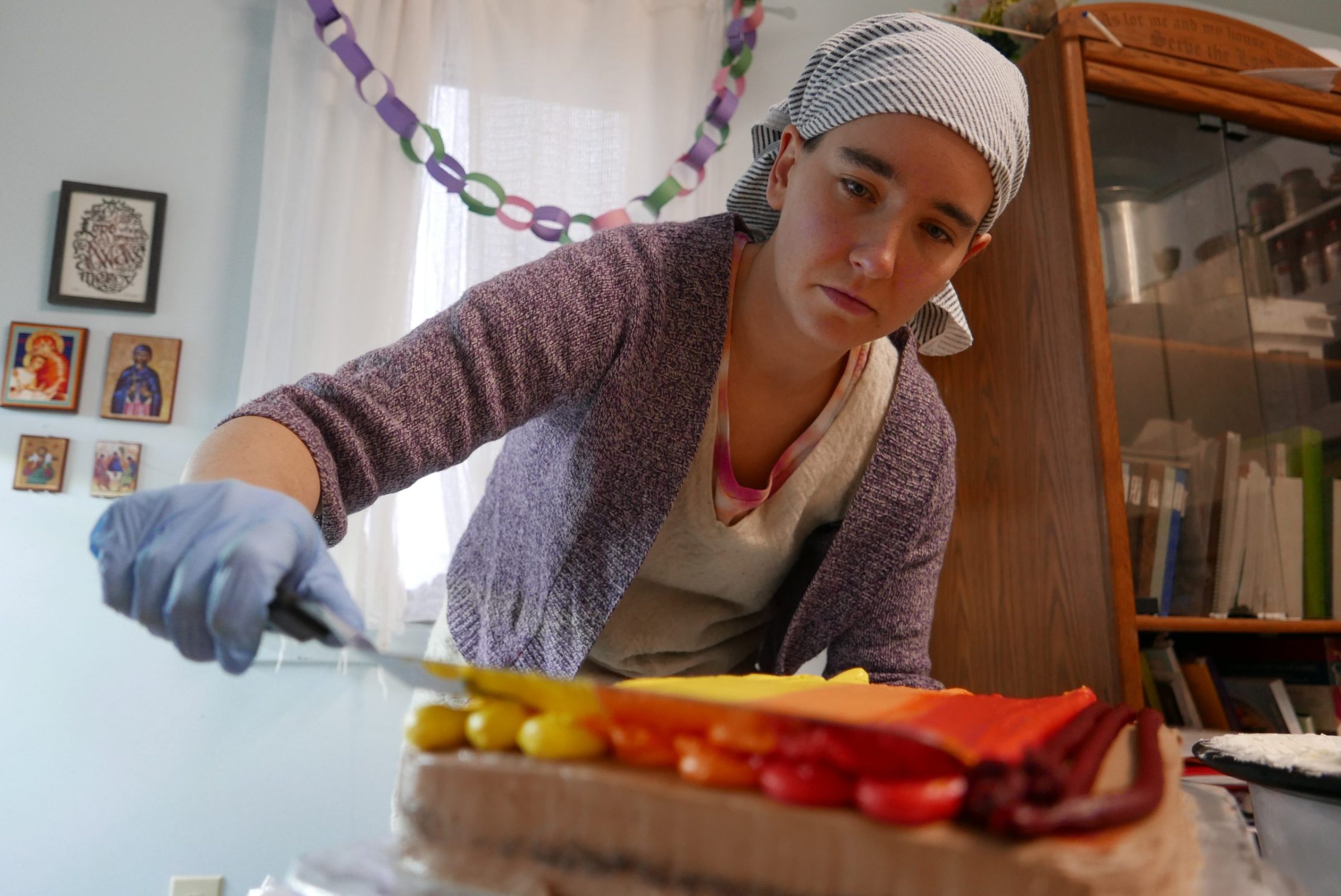 Rebecca Osborn blends orange, yellow and red together on top of a sheet cake at her house in Rankin Inlet. (Photo by David Venn)

It’s Friday morning and Rebecca Osborn has plenty to do. She’s baking a two-tier cake for a nine-year-old’s birthday, a chocolate sheet cake a man ordered for his mom and 48 cupcakes for her neighbour.

Osborn moves around her kitchen to the beat of her dogs, Sisko and Diamond, who growl at passing ATVs, her four-year-old daughter, Diana, who is hitting a fish-shaped xylophone, and several Google timers telling her that the buttercream crumb layers have finished chilling. 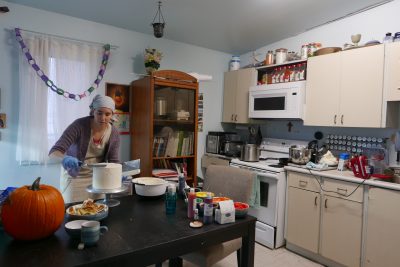 Rebecca Osborn moves from cake to cake in the kitchen of her Rankin Inlet home. Here, she smoothes the base layer of the bottom tier of one of her cakes. (Photo by David Venn)

This scene is what Osborn, who lives in Rankin Inlet, considers to be a scaled-back version of her home-based cake-making business.

“Rankin loves cake, apparently. I cannot believe how many cakes I’ve sold in a town of 3,000 people,” she says.

“It’s really humbling, but mostly I just feel responsible to make a product that makes people happy. It’s a lot of pressure.”

Working in 30-minute shifts — which is how long it takes for a layer of frosting to set in the fridge — Osborn mixes red, yellow and orange food colouring into buttercream, and prepares a bowl of gold sparkles.

“Mommy, look!” Diana says from the floor, holding up a picture of a My Little Pony purple unicorn fairy.

“Wow, you coloured in the lines so beautifully,” Osborn replies, squeezing buttercream onto a flat-top cake.

This cake is going to be Halloween-styled for a birthday. The colours are blended together to create an ombre effect, which is something Osborn hasn’t tried before.

Osborn began making professional cakes more than a year ago for fun. It was a hobby while in lockdown for COVID-19, but she always considered selling them if they continued to turn out well.

In June, a neighbour asked if anyone could make a cake for her twin sons’ birthday and Osborn offered. Nervous to ask her neighbour to pay, Osborn posted a portfolio of her work on social media to see what sort of reaction it would get. In one day, she booked the entire month of work.

“I was just inundated with orders,” she said.

Soon she found herself making 15 cakes a month, which was too much to allow her to work on other things like volunteering with the Anglican Church, podcasting and caring for her dogs. So Osborn scaled back to eight cakes per month.

She charges $100 for her standard vanilla, eight-inch, four-layer cake, which serves about 20 people.

Osborn normally makes kid-themed cakes, such as Sonic the Hedgehog or Pikachu. Once, she made a four-tier birthday cake, ordered by hamlet senior administrative officer, Darren Flynn.

What’s inside the cakes is still getting a little fine-tuning. Recently, Osborn switched from an oil-based recipe to butter because her oil-based cakes stopped turning out right. She says she has refunded more customers than she’s willing to admit.

“That’s like the worst because like, you make this thing, you work really hard, it’s this creative endeavour, and you do it to make somebody happy,” she said.

“So then when it doesn’t turn out, it’s heartbreaking because it’s just the opposite. You ruin their party.”

Osborn said she thinks oil-based cakes are tastier, and they’re cheaper to make, so she wants to find a way to go back to them. The problem, she suspects, is her 30-year-old oven, so she’s ordered a thermometer to test its accuracy.

“Being able to do this up north is really about efficiency and economy of scale,” she said.

“That’s the only way I’m able to give a reasonable price to people because food is so expensive. I sealift ingredients and I have a big spreadsheet where I’ve broken down all my costs.”

Osborn holds the top level of the two-tier cake, putting gold sprinkles on it.

Her gloved hands lower the cake back down carefully onto the metal decorating turntable. It rolls on a few round sprinkles and gets close to the edge. This part used to be quite stressful. 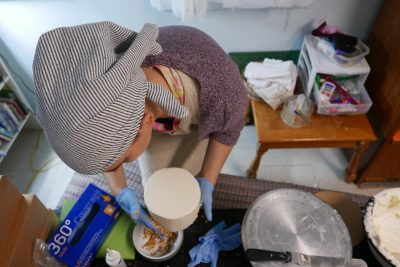 Rebecca Osborn lightly presses gold sprinkles into the sides of her cake. (Photo by David Venn)

While working, Osborn whispers little reminders to herself: “It doesn’t have to be perfect.” “Gloves, Rebecca.” “Let’s see if that’ll work.”

Osborn says she thinks she might want to teach classes one day. There are a few people in town who make cakes — some whom she collaborates with — but it would be nice for more to know how.

She grew up in the United States, in a home where her mother made cakes, and she learned the basics at a young age.

“It helps people celebrate. No it’s not a health food but it’s something that makes you feel special. And when you’re struggling or when your life is not going great, you really need that.”