Mercury in the atmosphere has stayed stable while levels found in bears increased dramatically, leading researchers to suspect releases from thaw and melt 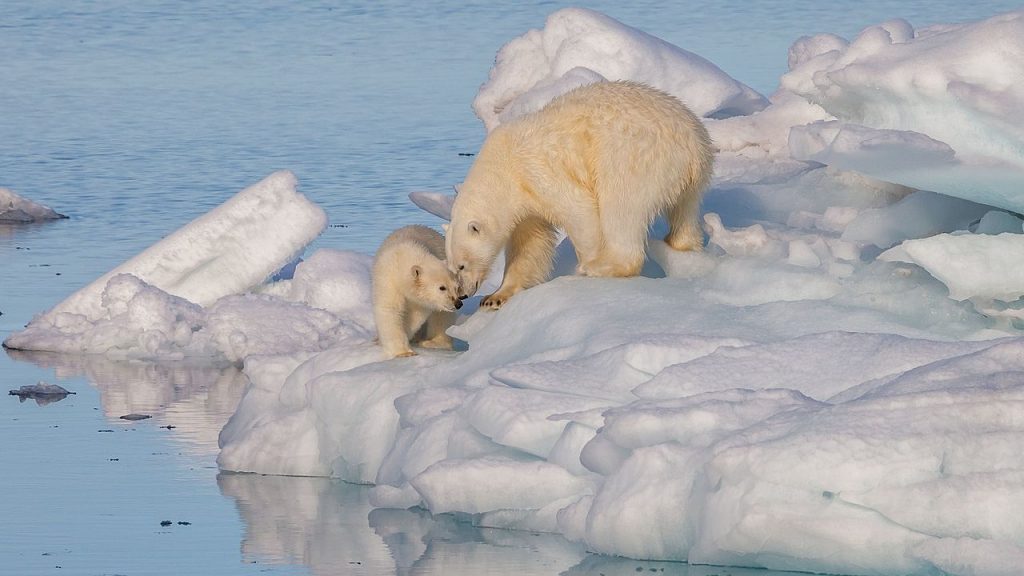 A polar bear mother and cub are seen on an ice floe in the Hinlopen Strait near Svalbard in a 2015 photo. (Andreas Weith / CC BY-SA 4.0 via Wikimedia Commons)

Polar bears in and around Svalbard are carrying increasing loads of mercury in their bodies, a sign that rapid warming is releasing mercury previously locked up by freezing temperatures, according to a new study.

The study, published in the journal Environmental Science and Technology, examined nearly 200 hair samples collected between 1995 and 2016 from polar bears on the Norwegian Arctic archipelago and nearby ice. It found that bears’ mercury levels, though widely varying, increased significantly over the period.

Mercury is a potent neurotoxic pollutant that can accumulate in the bodies of both humans and wild animals and is linked to a host of ill effects.

There is no increase of mercury being pumped into the atmosphere around Svalbard, the authors said. So that leaves re-emission of stored mercury as the likely suspect, they said.

“Seeing that mercury emissions to the atmosphere are estimated to be stable, and climate change is much more pronounced in the Svalbard area than elsewhere in the Arctic, the most likely conclusion for the recent increase is re-emissions, likely a combination of melting sea ice, glaciers, permafrost and river discharge,” co-authors Anna Lippold and Heli Routti of the Norwegian Polar Institute said in an email.

Over the two-decade study period, the median levels of mercury in the polar bears’ hair ranged between 1.61 micrograms per grams and 2.75 micrograms per gram. Though there was a wide variety each year, the median level increased by 0.86 grams per microgram over the study period, and the maximum levels reached in the latter years were twice as high as the maximums recorded in the earlier years, the study found.

The decline was attributed to a change in diet as Southern Beaufort Sea bears spend more time on land. Bowhead whale meat and blubber scraps left on the beaches after Indigenous hunters butcher their harvests have become increasingly important food sources for the Southern Beaufort Sea polar bears, the study noted. Krill-eating bowhead whales are lower on the trophic level than bears’ normal prey — fish-eating seals — so they accumulate less mercury that could be passed onto polar bears, the 2017 study noted.

The Svalbard-area polar bears are also spending more time on land and eating more terrestrial food, as evidenced by isotope analysis conducted in the new study, along with numerous on-site observations. Ground-nesting birds like geese, bird eggs and reindeer meat are among the land-based foods now included in a diet that used to be almost entirely made up of seals.

But that dietary change does not make up for the increased availability of mercury in the food web, said Jeff Welker, a University of Alaska and University of the Arctic biology professor and a co-author of the new study.

Svalbard, Welker said, has special characteristics that make it vulnerable to reemission of once-frozen-in-place mercury — sea ice, glaciers, permafrost and river, all of which are changing rapidly as the climate warms.

“Svalbard is environmentally a place that is kind of a perfect storm,” he said.

Reduced sea ice exposes more open water that can absorb mercury from the atmosphere. Melt of glaciers and thaw of permafrost also frees mercury, and bigger amounts of meltwater swells the outflow from rivers that can discharge that newly freed mercury.

About 90 percent of the mercury in the Arctic environment is believed to come from human sources, the study notes. Mercury can travel in gaseous form over long distances, but it will condense and drop when the atmospheric currents carry it to cold areas like the Arctic. For a time, the mercury journey would end there, with a lockdown in the snow or ice, said Welker, who manages a lab at UAA that studies Arctic and boreal ecosystems, climate change and isotope chemistry.

Mercury emissions in North America and Europe have now declined, and atmospheric mercury around Svalbard has stabilized. But polar bears there are ingesting more of it, pointing to a legacy that outlasts the initial smokestack emissions, Welker said.

“The biogeochemistry of mercury in the Arctic isn’t just about additional emissions that are being pumped into the system by continued use of fossil fuels,” he said.

One of the dangers of Arctic snow and ice melt, the new study notes, is that it allows stored mercury to be exposed to bacteria that cause methylation. Mercury in the food web is most dangerous when is it methylated.

Those varying results, plus the strong downward trend in mercury levels in Southern Beaufort Sea bears, shows the complexity of mercury dynamics across different areas and conditions in the Arctic, Welker said.

“This is kind of unpredictable in many ways,” he said.