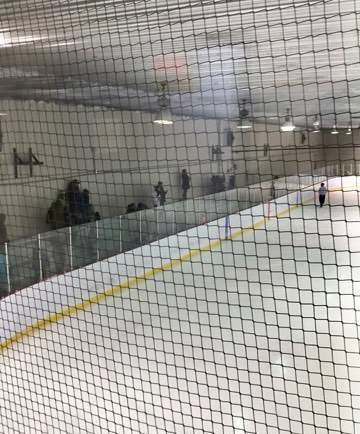 A referee clinic will be held in February in Puvirnituq alongside the Tunu Memorial Hockey tournament at Sikulik Arena, seen here. (File photo)

Clinic will be held alongside Tunu Memorial Hockey Tournament

Between 15 and 20 Nunavimmiut will have the chance to take basic referee training in Puvirnituq in March.

The course will coincide with the Tunu Memorial Hockey Tournament, which brings in teams from across Nunavik, so those outside the community will be able to participate.

The idea of hosting a referee clinic in Puvirnituq came from within the ranks of the Kativik Regional Police Force.

Jeffrey Heron, a constable with the force, has been officiating hockey since he was a teenager and worked as a referee for the Quebec Major Junior Hockey League for nine years. He moved to Puvirnituq a year and half ago.

“When I got up north, I knew hockey would be big and of course in Nunavik hockey is very popular,” Heron said. “But there was a lack of any sort of referee program for any of the hockey.”

The police are always involved in the Tunu Memorial Hockey Tournament, and Heron saw the opportunity for some training to coincide with it.

“My goal is to get as many people from other villages as well involved,” said Heron.

The Tunu Memorial Tournament, now in its fifth year, draws people from across Nunavik. Air Inuit offers a discount for those travelling to Puvirnituq for the tournament, and in addition to coaches and players, family members and fans come along as well.

“There are a few hundred people extra in the community because of the tournament,” said Jean-Francois Morin, deputy chief of the KRPF. The police force and the Kativik Regional Government help sponsor the tournament, organized by Puvirnituq’s recreation department.

For the referee training program, a few other sponsors have stepped up, including CCM, who has donated referee jerseys, pants and whistles for the trainees, said Richard Trottier, a former NHL referee and director of officiating for the Quebec Major Junior Hockey League.

Caps are being supplied by the Quebec Major Junior Hockey League to referee trainees during a clinic in Puvirnituq. (Photo courtesy of QMJHL)

The tournament was planned to start on Feb. 20, running for four days, but has been postponed to March 5 to 8. Once the schedule has been set for the tournament, officials will sort out times for the referee clinic, which requires both classroom and ice time.

The training will cover Level 1 of Hockey Canada’s officiating program, said Trottier. He and four other refs will be in Puvirnituq to officiate the tournament and deliver the course.

“It’s a good thing because it’s never been done up here,” said Morin. “Lots of the teenagers and young adults participate [in] and enjoy hockey, and a lot referee without proper training, so this will be something new.”

Rather than contracting out officiating for bigger tournaments, he said it would be great to be able to have people from within Nunavik take those positions.

“There’s a strong hockey program already in place and I saw an area of improvement,” Heron said. “As a police officer, I like to be involved in the community and I thought adding a ref program would help the minor hockey program in Nunavik.”

“I was fortunate enough to obtain my Level 6 before I came up north, so for sure I’ll be able to hopefully supervise and offer feedback and see some of our new officials go from Level 1 up to 2 and 3 and so on,” he said.

This story has been updated to reflect a change in the dates for the Tunu Memorial Hockey Tournament and the concurrent referee training clinic.