Reflection: Pope’s apology was historic, but did it matter? 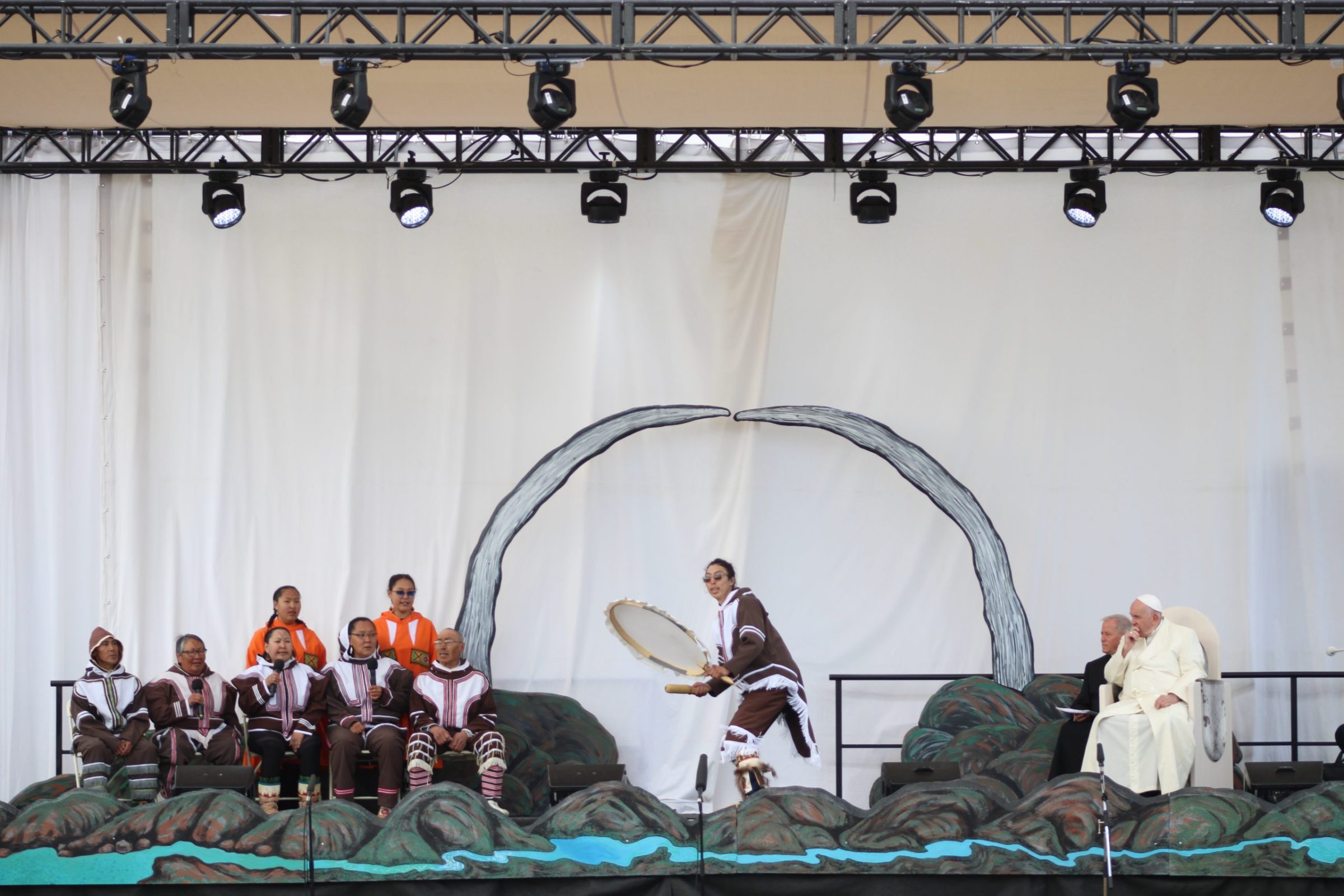 A drum dancer performs in front of Pope Francis during a display of Inuit culture that was part of the papal visit to Iqaluit on July 29. (Photo by David Venn)

I’ve always been a sucker for big historical events — glued to the TV for royal weddings, presidential inaugurations and state funerals.

So, when Pope Francis announced he would visit Iqaluit as part of a three-day trip to Canada, I was instantly drawn in.

He had apologized in Rome for the role some Roman Catholics played in Canada’s residential school system, but all eyes were on His Holiness to see him say sorry on Canadian soil.

A papal apology was No. 58 of the Truth and Reconciliation Commission’s 94 calls to action. Whether his apology actually satisfied that call to action is debatable.

He begged for forgiveness on behalf of the Church, but he didn’t go as far as the commission hoped he would — to apologize for the “Church’s role in the spiritual, cultural, emotional, physical, and sexual abuse of First Nations, Inuit and Métis children in Catholic-run residential schools.”

Whenever a world leader of the Pope’s status comes to town, it’s a challenge for journalists. It was rewarding to see Nunatsiaq News’ team deliver on an ambitious coverage plan.

I covered Pope John Paul II’s 2002 visit to Toronto, tagging along with a busload of pilgrims from Niagara Falls who attended World Youth Day.

By then, John Paul was a rock star among world leaders. He celebrated a mass with 800,000 people in Toronto’s Downsview Park, the same site where the Rolling Stones would play the so-called SARS-Stock concert a year later to a smaller crowd of half a million. That concert was organized to help Toronto’s economy recover from the impact of Severe Acute Respiratory Syndrome, the public health crisis of the early 2000s.

John Paul’s visit was jubilant. People were ecstatic to see him as the Popemobile worked its way through the crowd. His last visit to Canada was a celebration and a rally of young Catholics.

Francis’ visit to Canada — and to Iqaluit on July 29, in particular — was much different. Sombre. Subdued.

The crowd in front of Nakasuk Elementary School was about 1,000 people. They listened politely, but broke away from Francis’ hour-long speech — delivered in his native Spanish but translated into Inuktitut and English — to pop over to Northmart for some groceries with plenty of time to come back and hear more.

Two weeks (and a COVID-19 case) later, I found myself in Kuujjuaq for work, where I struck up a conversation about the Pope’s visit.

“Will it make a difference?” a few people asked.

For many people, there’s nothing any pope can say or the Catholic Church can do to make amends for the evils that occurred in residential schools.

But for others, the Pope’s visit was a cathartic moment that offered recognition from the Church’s highest mortal official that mistakes were made. It gave some people the release they needed. It gave them permission to forgive, permission to begin healing.

If reconciliation is going to work, it will be through gestures that allow Indigenous people to heal from the pain inflicted by a state that wanted to eliminate their culture, language and traditions.

Francis’ visit was an important historical moment, but almost as soon as it was over it was clear its true significance will be measured in what kind of legacy it has in the future.