Remembering when Christmas was new to western Nunavut

“There were no celebrations. People lived in snow houses and for survival the men went out to look for seal holes every day” 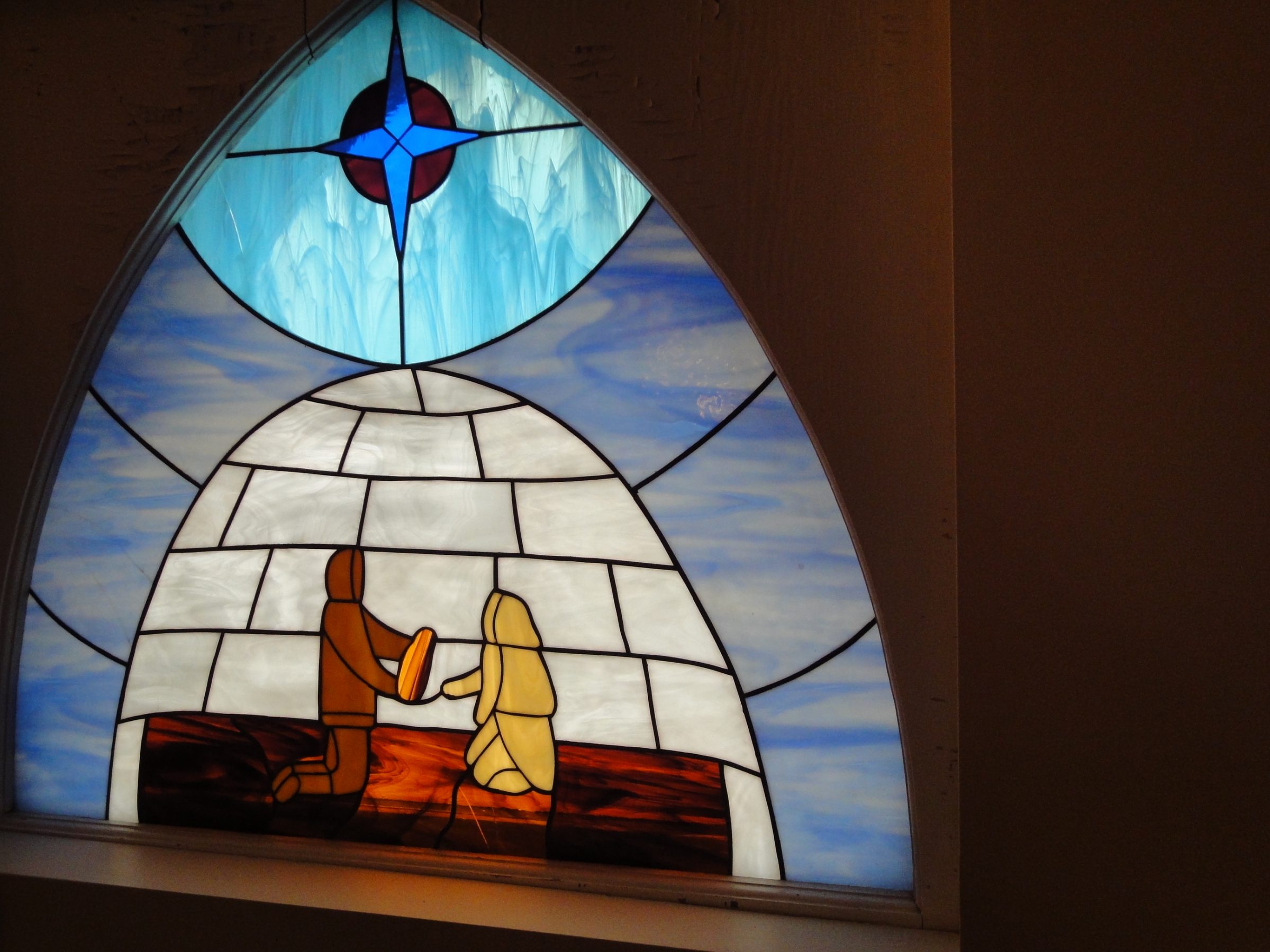 A stained glass window at St. George’s Anglican Church in Cambridge Bay shows a scene of Joseph and Mary with baby Jesus in an igloo. (Photo by Jane George)

In 2008, when he was 84, Bishop John “Jack” Sperry spoke to Nunatsiaq News about his memories of Christmas in the 1950s and 1960s when he lived in Coppermine, now known as Kugluktuk. Sperry died in February 2012 at 87, but his legacy endures through his Inuinnaqtun translations of Bible verses, prayer books and hymns, as well as Christmas carols sung in western Nunavut. We share this interview again with you during this holiday season.

Christmas, as it is celebrated today, was unknown in 1950, when John “Jack” Sperry first arrived as an Anglican missionary to Coppermine, now known as Kugluktuk.

Kitengmiut Inuit of the region traditionally held their celebrations in the spring, because during the dark, cold days of December, there was nothing to do but concentrate on survival, Sperry said.

“There were no celebrations. People lived in snow houses, and for survival the men went out to look for seal holes every day,” Sperry said.

Camps were scattered across the Arctic coast and inland regions, and Kitengmiut didn’t even come to the mission for Christmas unless they were sure missionaries like Sperry would be doing something special.

Traders first introduced the idea of the holiday as a way of breaking up the long winter, Sperry said.

That’s because December also marked the time of year when fox furs were white and thick, so many people were ready to travel by dog team to Coppermine, building igloos along the sea ice of the Coronation Gulf near the Hudson Bay post, to trade.

“There was a good crowd around the airstrip on the ice, awaiting this wonderful person who was coming. Everybody crowded round and out came a man with a very large tummy dressed in red and he had a big white beard.

“He stepped out and before he could say his first ‘ho ho ho,’ you could hear kids screaming. They wept. They got behind their mothers to get away from this frightful man, like an ogre, until he finally was able to say ‘ho ho ho’ and not hurt anybody,” Sperry said.

For Sperry and his wife Betty, Christmas preparations started early after the summer resupply ship called with its load of donated presents from Anglican church groups in the south.

Without those donations they wouldn’t have had gifts, because there was nothing to buy in the Hudson Bay trading post, Sperry said: “their stores were baking powder and ammunition and rifles.”

He and Betty spent months deciding who would get what—and they always had a good idea of who would come for Christmas.

“We had stacks of stuff to distribute, and we would hand them out after Christmas Day feast,” he said.

The feast after the Christmas morning service included a kind of rice porridge with raisins, served with buns, frozen fish and “lots of tea.”

“People had to bring their bowls and after the Christmas morning church they all sat around and they ate the rice. It was good,” Sperry said.

Christmas also included many church services, at least once a day and two or three times on Sundays.

“People came in and they wanted a service. Some had had nothing for a while because the lay readers hadn’t been taught yet,” Sperry said.

During the 1960s, games, square dances and dog team races also entered into the festivities.

Christmas trees were not part of the holiday then, although Sperry would travel by dog team to the tree line, about 30 kilometres away, to get a tree for his family. Sometimes, along the way, he said he would get distracted and hunt ptarmigan.

Another holiday ritual involved listening to the CBC Christmas broadcast, when messages sent to the CBC would be read over the radio. To hear their messages, the Sperrys had to listen to everybody else’s messages, too.

There was one memorable message to a woman in Coppermine from her grandmother, saying “so sorry to hear about that painful carbuncle that you are suffering from.”

“Of course, we heard it and wanted to know more,” Sperry said.

But drinking alcohol was never part of the holiday celebration.

“For many years there was nothing in Coppermine. The police had nothing to do. It was 50 years before the modern problems began,” Sperry said.

Occasionally Christmas was marked by sadness. One man travelled 200 km with his wife to Coppermine, just to be there during Christmas. But en route his wife gave birth to a baby who died.

“They came in … we always greeted people and he came in holding this little corpse of a baby and I thought that’s heartache … a Christmas arrival that didn’t go right. Most of the time Christmas was a joyous time,” he said. 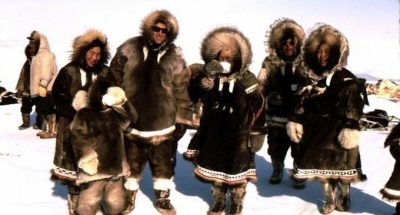 This photo shows Sperry, third from the left, with friends on a spring trip out on the land. (Photo courtesy of the Sperry family)

After settling in Yellowknife, Sperry, who served as bishop of the Arctic Diocese from 1973 to 1990, would go to Stanton General Hospital where he spoke in Inuinnaqtun with elders from the Kitikmeot region.

He said some would cry because he also remembered those old times before “the jangle of harnesses and the shouts of dog drivers were exchanged for the staccato roar” of the snowmobile, as he wrote in his 2005 book, Igloo Dwellers Were My Church. 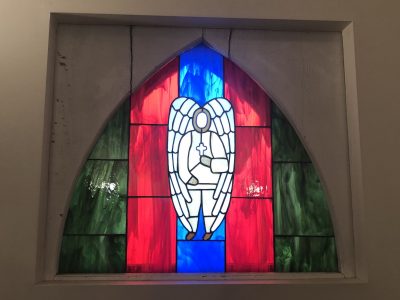 The Angel Gabriel in white warm garments, as seen in one of the stained glass windows of St. George’s Anglican Church in Cambridge Bay. (Photo by Jane George)

These days, at Christmas, some things remain unchanged from those many years that Sperry spent in the North: it’s still dark in the Kitikmeot region.

The Christmas holiday falls during the time of the year when the sun doesn’t rise above the horizon in Cambridge Bay, one of the missions which Sperry also attended to as bishop.

You can still hear the sound of a church bell ringing, inviting you to the small white St. George’s Anglican Church, built in 1927. Once inside, you see candles illuminating the wall hangings behind the altar, with one featuring an Inuinnait nativity scene. 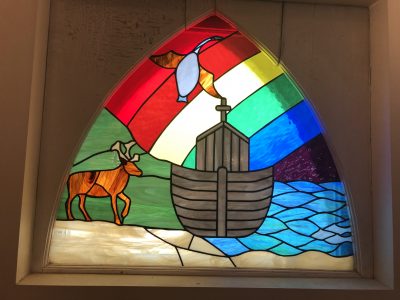 A stained glass window in St. George’s Anglican Church in Cambridge Bay shows Noah’s ark, with a rainbow in the background and surrounded by ice, along with a caribou and snow goose. This window, and others, were donated by Father Paul Bachman and his wife Ann Marie. Father Bachman was the parish priest at St. George’s for many years. (Photo by Jane George)

Among the 15 stained glass windows, there’s a window that shows a baby Jesus swaddled in caribou furs inside an igloo, while the star of Bethlehem lights up the Arctic sky overhead.

This year, during the Christmas service, you can also join in and sing Sperry’s Inuinnaqtun translation of Silent Night: