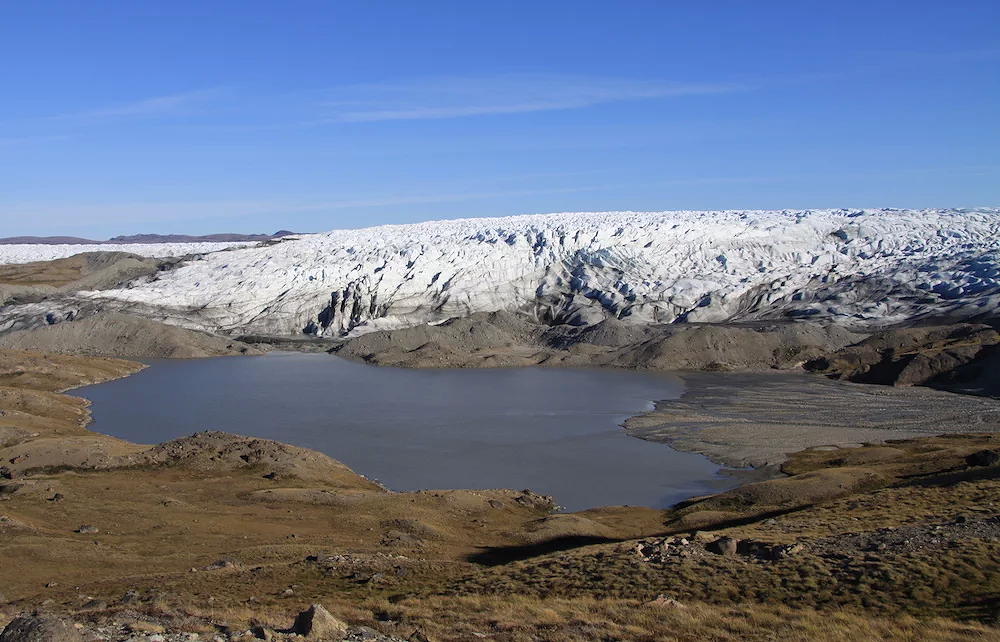 As the Isunnguata Sermia Glacier retreats, organic material trapped under it during its previous expansion is being released as methane. (Chmee2 / Valtameri)

By Kevin McGwin
The Conversation

Most people are familiar with the sudden appearance of bubbles in a bottle of soda after the lid is opened. The explanation for why that happens is that, with the lid on, the pressure inside the bottle keeps the carbon dioxide gas dissolved in the liquid soda. Open the lid, and the pressure falls. The fizziness is the carbon dioxide as it escapes from the now effervescent soda.

Two papers published at the end of 2018 and a third, published this week, appear to draw a picture of the same phenomenon taking place on a much larger scale when it comes to methane trapped under ice sheets and large glaciers.

More research will be required to understand the mechanics behind the phenomenon and whether it is common to large ice surfaces beyond those in Iceland and Greenland looked at in the studies, but the findings seem to indicate the presence of a source of a powerful greenhouse gas not previously included when calculating levels of carbon pollution.

Like carbon dioxide, methane contributes to global warming. While it only makes up 17 percent of greenhouse-gas emissions, primarily from sources such as agriculture, oil and gas production and wetlands, it can trap 30 times as much heat as carbon dioxide, meaning that scientists take a keen interest when a source is identified.

Even though it is a more powerful greenhouse gas, calculations of how methane relates to global warming are not always straightforward; methane, for example, exists for a much shorter period of time than carbon dioxide does, and areas underlain by sources such as thawing permafrost may help reduce carbon pollution if they eventually support plants that can remove carbon dioxide from the air.

But some methane is also trapped under ice.

In 2016, two Danish scientists in Greenland to study how soil absorbs methane discovered by chance that air flowing out from meltwater channels under the Isunnguata Sermia Glacier, near Kangerlussuaq, contained higher levels of the gas than the surrounding air. 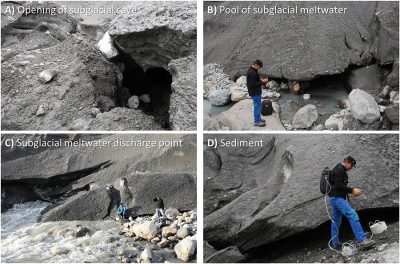 Their findings were reported in November in a paper in Scientific Reports, a journal, in which they posited that the methane was being produced from the decomposition of organic material that became trapped under the ice during a past glacial expansion.

Later measurements taken by the pair, as well as by the authors of the paper published this week in Nature, showed that the meltwater itself contained dissolved methane, providing evidence that this is the case.

How the methane ends up in the water is similar to the effect of the lid on the soda bottle. On the one hand, the ice above prevents the methane from going anywhere, and then, the pressure caused by the weight of the ice forces it the methane into meltwater found between the ice and the ground upon which it sits.

As the lid on the methane is released—in this case by being carried towards outlets at the edge of the ice sheet by the meltwater—it can escape into the atmosphere.

More papers due on the topic in the coming year will seek to address some of the unanswered questions relating to the process, including how the methane is produced and when the organic matter was trapped. It has also yet to be determined whether meltwater from underneath the Antarctic ice sheet and large glaciers in other parts of the Arctic contains methane.

Ultimately, according to Christian Juncher Jørgensen, who participated in the 2016 collection, the findings will give an indication of how quickly the methane can be expected to be released.

The most recent study, based on measurements made from runoff from the Leverett Glacier (located near the Isunnguata Sermia Glacier), seem to provide evidence of short, but intense releases from inside the ice caused by sudden flushes of water from above.

Another possibility suggested by Jørgensen, however, is that the methane is being produced at the margin of the ice sheet throughout the melting season and released in a single, drawn-out exhale, and not—in keeping with the bottle analogy—as sudden burps.