Sealift arrival in Kuujjuaq brings all hands on deck 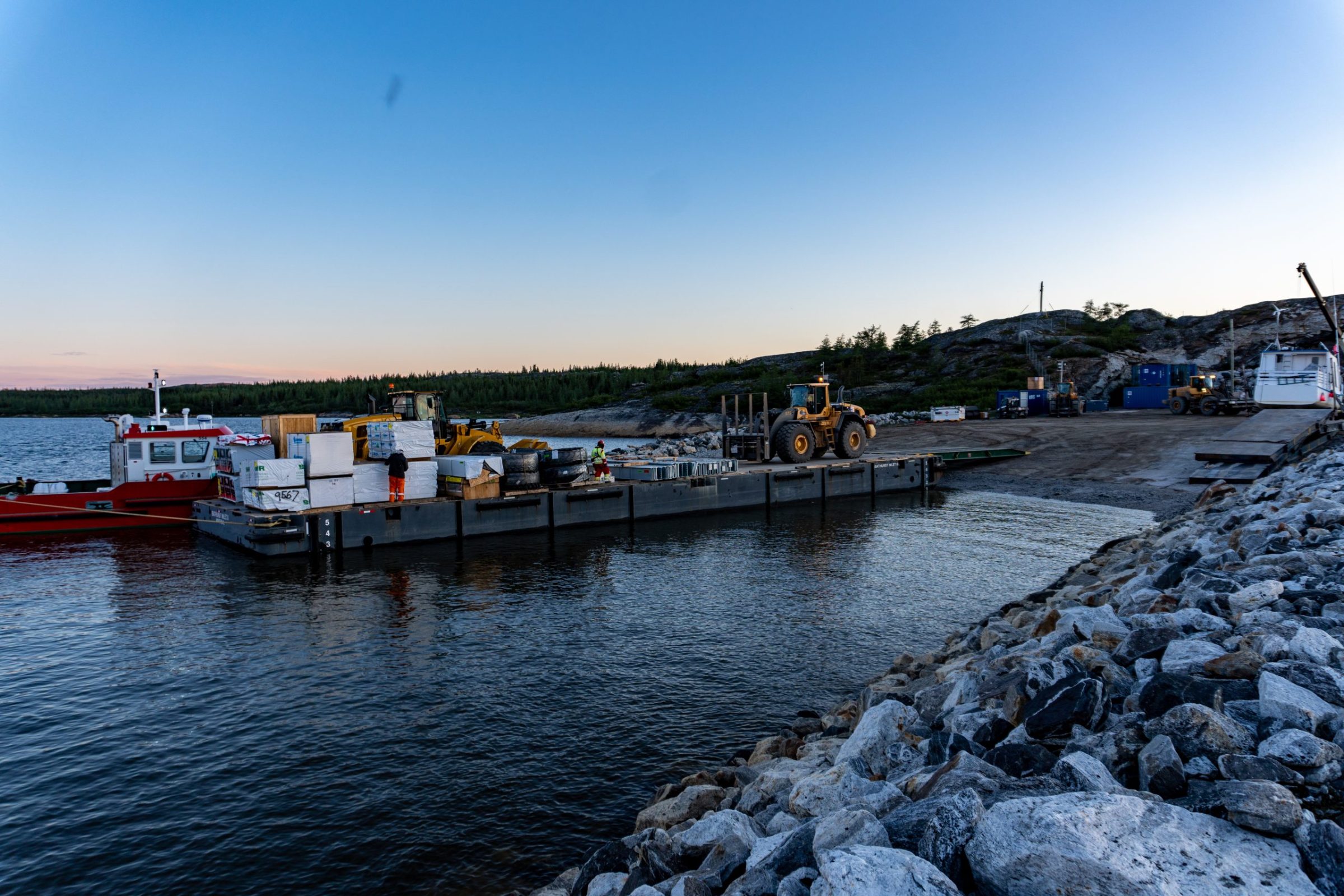 A vessel moves goods from a ship to the shore of Kuujjuaq during 2022’s first sealift of the year. (Photo by Cedric Gallant)

As the sealifts arrive in Kuujjuaq, they create a sort of awakening throughout the village, which bustles with cargo-carrying vans shuttling back and forth from the marina.

Three times a year, two cargo ships sail to the mouth of the Koksoak River bringing in cars, construction materials, mechanical parts, dry goods — anything that is non-perishable.

Shipping companies NEAS and Desgagnés Transarctik Inc. take care of this mammoth task. They start from southern Quebec and make their way throughout Nunavik and Nunavut when ice conditions allow. 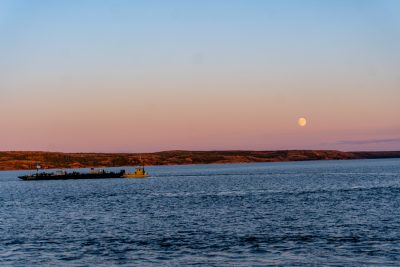 A smaller ship returns to the main ship after being unloaded in Kuujjuaq as part of the first sealift of the year in July 2022. (Photo by Cedric Gallant)

NEAS’s ship, the Nunalik, arrived July 7 and immediately started unloading. Desgagnés’ vessel, the Rosaire A. Desgagnés, came in July 9. It left July 16, but the Nunalik is expected to be in the area until Wednesday.

The sealift’s arrival is a little bit like Christmas, says Dave Forrest, president of Tivi Inc., a vehicle-rental and logistics company.

At the marina, lines of parked cars wait for high tide, when shipments can come to shore.

“Anything that we don’t get by air, we must rely on the sealift [for],” he says.

Forrest’s company is involved in many sectors of the market, from vehicle-renting to providing resources for exploration companies. He says the sealift brings his clients bulk items like lumber, and more than 1,000 barrels of fuel.

But using the sealift as part of a company’s supply chain can be tricky. 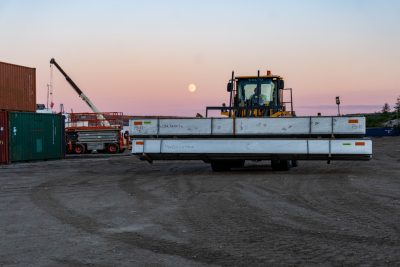 A loader transports metal beams in Kuujjuaq on July 11 after a shipment arrived in the village as part of the first sealift of the year. (Photo by Cedric Gallant)

“There is always a question of capacity, and we know we have to reserve our space early,” Forrest says.

NEAS recently moved its southern facility from Valleyfield, Que., near Montreal, to Bécancour, Que., which is closer to Quebec City.

Forrest says the change makes it more difficult to get the materials he needs onto the sealift. But he takes it all in stride.

“[The sealift] adds another variable into the mix, but one that we are used to facing, even if it’s frustrating at times,” he says.

Over at the Kuujjuaq Inn, night manager Jeremy Davies talks about the price difference between shipping goods by plane compared to by sealift.

The Kuujjuaq Inn’s bar, called the Lounge, uses the sealift to bring in beer, pop and wine. 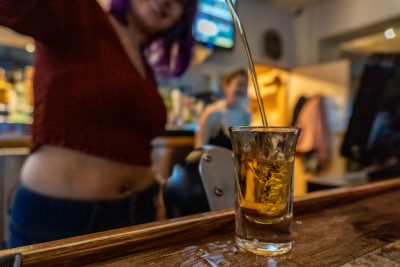 The stash usually lasts until the next sealift, says Davies, who adds his bar tries to order enough product to last through winter, making ends meet with a few plane shipments if necessary.

He says as it stands now, the Lounge “received beer that was enough to last until the next shipment. But then the ship got delayed an extra 10 days.”

Any delay can be bad for the whole town.

“Everyone’s waiting,” Davies says. “The grocery stores are waiting, you might go to a store trying to get something and you can’t get it because it’s on the ship.”

Before the ships arrived, the three grocery stores in Kuujjuaq were distinctly empty.

Daniel Rothkranz is knee-deep in sealift papers inside the Co-op store’s conference room. When it comes to grocery stores, it’s all about controlling costs. 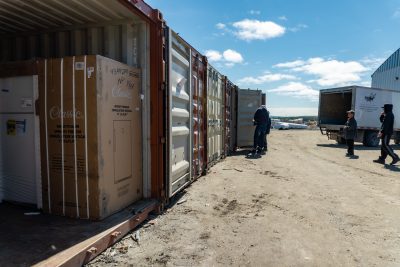 Daniel Rothkranz discusses details of a specific container with a Co-op employee in Kuujjuaq. (Photo by Cedric Gallant)

“Everything that can be shipped on the boat is shipped that way,” he says. “But eggs, milk, bread, whatever is fresh comes by plane cargo.”

Rothkranz says the ships that come in the summer are usually on time, but the final ship before winter can be less reliable.

“It has to deal with the ice, and that can create problems,” he says.

The ship travels slowly, or sometimes just doesn’t come at all, when winter ice starts to form.

And then there are those who order personal items on the sealift.

Last March, Michelle Dubé’ says, her co-worker told her, “If you want to get your car on the first ship here, you better reserve your space now.”

So she did. In April, Dubé drove her car to Bécancour, Que., leaving it there in the hands of NEAS to sail the high seas. Her car arrived July 9.

Dubé says it was a “pretty expensive project” to get her nearly new car to Kuujjuaq. 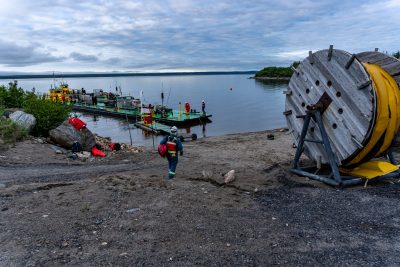 Sealift workers prepare a vessel to sail away from the Kuujjuaq shore at around 5 a.m. on July 9. (Photo by Cedric Gallant)

“Having a car travel by sea is not something that happens too often,” she adds with a laugh.

Dubé was not at the marina to see her car driven off the small boat onto Nunavik’s shore.

Even after the long absence, plus a few scratches on the paint job, the excitement remained the same.

“When I got back to Kuujjuaq with my car here, I was happy because my gift got here,” she says.

“You get all excited, you hope that everything went well, and then when it gets here you celebrate!”

Dubé knows her experience is unique to the northern area where she lives.

She says “it is not every day your car goes on the sea to get to you at a place that is not accessible by car.”