Reflection: Sense of purpose was palpable at March for Truth and Justice

The stories we loved to tell: Nunatsiaq News reporter Madalyn Howitt reflects on one of her favourite assignments of 2021

Piita Irniq, a former commissioner of Nunavut, and a victim of residential school abuse (right), embraces former Nunavut MP Mumilaaq Qaqqaq after speaking at the March for Truth and Justice in Ottawa on July 31. (Photo by Madalyn Howitt)

Last summer, when the Tk’emlups te Secwepemc First Nation located the remains of 215 Indigenous children on the grounds of a residential school in Kamloops, B.C., it sparked waves of pain and anger across the country.

I say waves, because more unmarked graves continue to be found. We’re now at thousands of confirmed discoveries, and experts say more are on the way.

It’s no surprise that emotions were running high on July 31, the day the March for Truth and Justice took place on Parliament Hill.

The demonstration was a clear protest against the federal government’s perceived inaction on seeking justice for victims of residential schools.

Organized by Nunavut’s then-MP Mumilaaq Qaqqaq and NDP counterpart Charlie Angus, the march brought together over 500 demonstrators, many of them waving signs that read “Every Child Matters” and wearing the bright orange shirts that have come to symbolize the fight for justice for victims of residential schools.

As marchers moved from Parliament to the Justice Department down the street and back again, Indigenous elders addressed the crowd, sharing moving accounts of how their lives were impacted, and continue to be impacted, by the residential school system.

Organizers demanded the government accept accountability and appoint a special prosecutor to investigate the crimes committed at residential schools, and Qaqqaq spoke specifically of her intentions to seek justice for the victims of Rev. Johannes Rivoire, an Oblate priest accused of sexually abusing children in several Arctic communities in the 1960s and ‘70s. 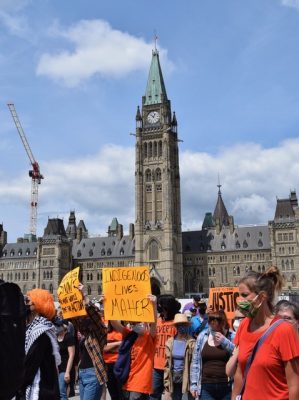 Hundreds of demonstrators, many wearing orange shirts, flocked to Parliament Hill in Ottawa on July 31 for an NDP-led march demanding justice for residential school victims. (Photo by Madalyn Howitt)

The march also marked one of the last public appearances by Qaqqaq, who had announced in a speech in the House of Commons only a few weeks before that she would not seek a second term as MP, feeling that she wasn’t accepted in Parliament as an Inuk woman.

She’s been noticeably quiet on social media since leaving Parliament in September but has hinted she may transition out of politics and enter more activist circles. I’m curious if we’ll be seeing more Qaqqaq-led marches for truth and justice in the future.

On a personal note, the event was only my second-ever story for Nunatsiaq News, and after a year of pandemic restrictions, it was also one of the first events I was able to cover in person.

As I moved through the crowd and took in the scene, the sense of energy and determination in the air was palpable.

Gradually, as I approached demonstrators one after another, I realized that everyone I spoke with had a connection to the legacy of residential schools.

In addition to the survivors who were there themselves fighting for justice, parents, siblings, spouses, children and friends of victims were also marching in solidarity with loved ones.

I spoke with Paul Henry from Petawawa, who fought back tears recalling his wife’s experience at the St. Anne’s residential school in Fort Albany First Nation, and elder Sytukie Joamie of Iqaluit, who shared with me how the spirits of the children who died at residential schools will be freed “once justice is carried out.”

I was moved by how open and vulnerable everyone was with me as they shared their stories. Having the chance to bear witness to such a powerful display of activism was inspiring, and I felt privileged to be able to report on it.