Most fully covered by gravel and temporarily stranded on the seabed, according to new research 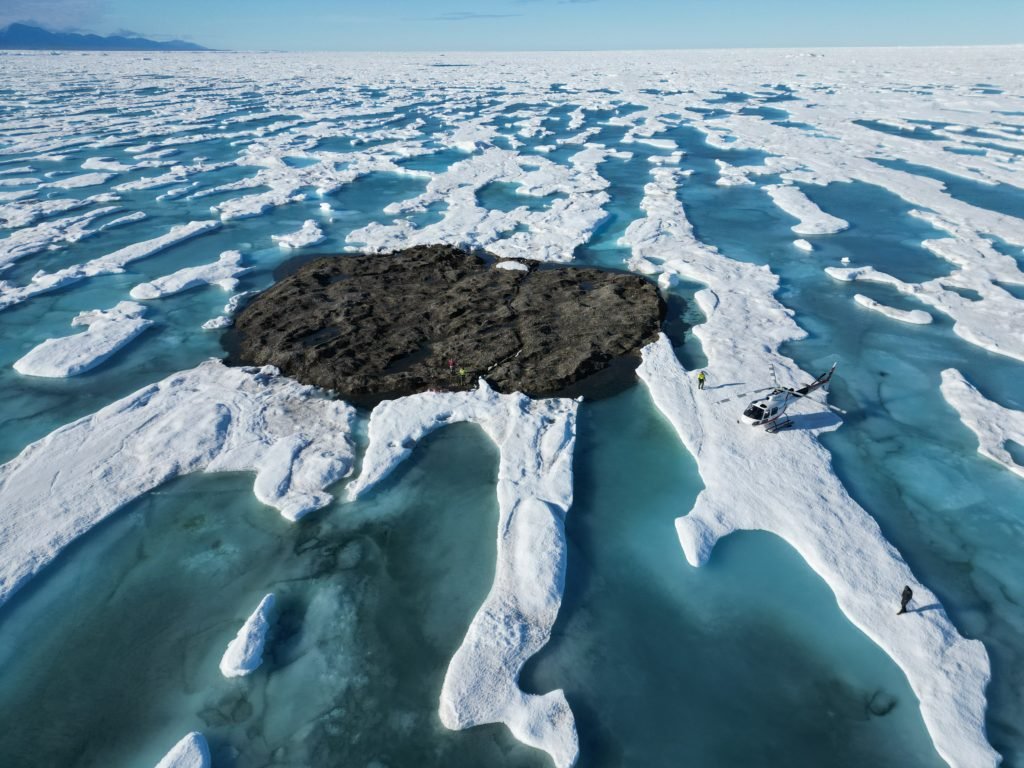 This new and until-then-unrecorded island lookalike, now believed to be an iceberg covered with gravel, was discovered during the Leister Go North 2022 expedition. (Martin Nissen / Danish Agency for Data Supply and Infrastructure)

For years, a heated international debate has been ongoing among explorers, scientists, island-hunters and other interested parties about which is indeed the northernmost island on Earth.

Since 1978, what has appeared to be a mushrooming family of smaller islands north of Greenland has fueled the discussion as still new members of the family were spotted. At least seven of these phenomena have been recorded and celebrated by visiting explorers, adventurers and scientists.

In the summer of 2021, five members of a Swiss-Danish science expedition, including this reporter, landed in a helicopter on yet another and until then undiscovered ice-and-gravel phenomenon about two kilometres north of the Greenland mainland.

When we returned home and as our aerial photography was studied more closely, the muddy but sturdy structure turned out to be about 80 by 30 metres, rising to about two metres above sea level. We came to believe it was indeed at the time the northernmost island in the world — or at least some sort of almost-island located in this very special geographical spot.

Now, a year later and following a new expedition counting Swiss and Danish scientists as well as two experts reporting to the Danish authorities, the issue of the small and poorly understood island-like structures has possibly been settled once and for all.

“For many years we all thought that storms from the north pushed sea ice from the Arctic Ocean towards Greenland, where the ice then forced sediments from the seabed towards the surface so that these new islands were formed, but that is not the case,“ Rene Forsberg, a professor of physical geodesy with DTU Space at the Technical University of Denmark, told me at his office in Copenhagen.

Rene Forsberg and Martin Nissen, a geographer from the Danish Agency for Data Supply and Infrastructure, camped for two weeks with the Leister Go North 2022 expedition at Kap Morris Jesup, Greenland’s northernmost point. The expedition, like the Leister Around North Greenland Expedition in 2021, were funded by the Leister Foundation in Switzerland.

Martin Nissen and Rene Forsberg joined the expedition this year to survey the structures in the waters north of Greenland for the authorities in Copenhagen. While Greenland — the world’s largest island — enjoys a large degree of political autonomy, the mapping of Greenland is still a responsibility of the government in Denmark. 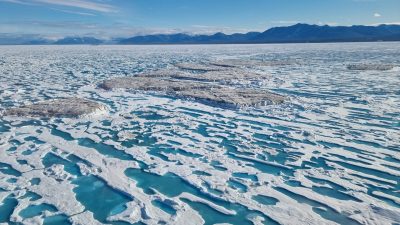 Several passing expeditions, explorers and scientists have recorded the structures in the shallow waters north of Greenland as islands. New findings say that they are not; these are icebergs partly or fully covered with gravel and only temporarily stuck on the seabed. When they melt, they will disappear again. (Martin Nissen / Danish Agency for Data Supply and Infrastructure)

During the two weeks of surveying, GPS mapping and lidar (or laser) mapping from a helicopter was carried out alongside bathymetric measurements both in the waters close to the disputed island-structure and also close to a new and previously unmapped member of the family. Some of the island-structures that were recorded years ago have disappeared and were therefore, of course, not subject to any measurement.

A peer-reviewed scientific rendering of the collected data will be published in the future, but a preliminary conclusion has been put into a press release.

“The new bathymetry observations confirmed all the ‘islands’ to be located at water depths in the range of 25 to 45 metres, which uniquely confirmed all ‘islands’ to be grounded icebergs, with an usual cover of glacial soil, pebbles and rock debris, forming a new category of semi-stationary ice islands,” the press release reads.

In other words, and according to these new findings, all the structures recorded since 1978 are not islands in any classical sense of the word, but simply icebergs partly or fully covered by gravel and temporarily stranded on the seabed in the shallows north of Greenland.

Forsberg and Nissen also measured the water depth right next to the island-like structure that was discovered in the summer of 2021 during the Leister Around North Greenland expedition.

“We drilled through three metres of ice on both sides of your ‘island,’ and concluded with the help of ordinary echo sounders that the water is about 27 metres deep in this particular spot. When we drilled, we stood on the frozen sea 27 metres above the seabed. We concluded that the gravel on top of the iceberg — which you took for an island — presently lies 29 metres above the seabed,” Forsberg told me.

“We also determined that about nine-tenths of the iceberg lies under water, just like icebergs usually do. It is stuck on the seabed. Only when it melts sufficiently will it travel onwards,” he said. According to Forsberg, the new measurements correlate lidar measurements of the iceberg done earlier this year as Forsberg passed overhead in a fixed-wing plane.

The gravel-covered structures north of Greenland — icebergs, ice-islands or ghost-islands, as you like — are potentially short-lived, but nobody knows exactly when they will disappear again. 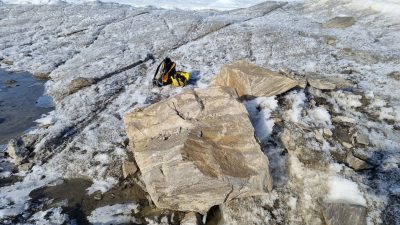 A rock measuring about one metre by one metre on the top of the “island” discovered in 2021. According to Rene Forsberg of the Technical University of Denmark, this is probably not sediment from the seabed, but part of the luggage carried first by a glacier and then an iceberg from Greenland’s interior into the sea. (Rene Forsberg)

The icebergs have most likely broken off from glaciers on Greenland’s mainland to the west of Greenland’s northernmost point, Cape Morris Jesup. These glaciers, like dozens of other glaciers in Greenland, carry with them gravel from Greenland’s interior. After breaking off into the sea from the calving glaciers, the icebergs drifted eastward. Those still visible are now temporarily stranded in the relatively shallow waters just north of Cape Morris Jesup and new ones will continue to appear.

The Danish Agency for Data Supply and Infrastructure is currently mapping all ice-free land in Greenland in an exercise that also involves U.S. satellites, the U.S. National Geospatial-Intelligence Agency, the Danish defence forces and Greenland’s Self Rule Authority. The ice-free parts of Greenland’s landmass cover an area roughly the size of Norway; Greenland’s inland ice sheet is not included.

In 1978, as the first of the stranded icebergs was discovered it was named Oodaaq Island after a famous Greenlandic dog handler. For years, Oodaaq Island, which lies a bit north of Inuit Qeqertaat, was talked about as the northernmost island in the world and added to formal Danish maps of Greenland. Now, as Oodaaq Island changes in status from island to iceberg, it will be scrapped from the maps again.

“Oodaaq Island will not appear on the maps when we publish our new maps of Greenland, most likely later this year,” Martin Nissen told me.