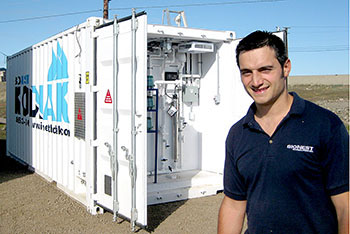 A project manager with Bionest Kodiak, Serge Baillargeon has been supervising installation of a pilot project containerized sewage-treatment facility for the city. If it works as well as the computer models suggest, Iqaluit will consider retrofitting its currently empty sewage-treatment tanks with the Bionest system. (PHOTO BY JOHN BIRD)

Iqaluit’s next great sewage-treatment experiment is just about ready to go online.

A Quebec Company, Bionest, is installing a small, containerized sewage-treatment system right beside the city’s state-of-the-art but non-functioning plant whose massive, enclosed tanks still sit empty at the head of Koojesse Inlet.

The Bionest container is a pilot project, intended to demonstrate the efficiency of the company’s system at treating sewage in a northern environment.

Over the next six months, Bionest, working with city staff, will monitor everything about the Kodiak container’s operation, including rate of flow, nature of sewage going into the system, quality of the water coming out, and energy used to keep the plant functioning at an optimal 12 C.

Bionest project manager Serge Baillargeon said the company designed the system to meet Environment Canada and Nunavut Water Board standards for the effluent of:

By comparison, Baillargeon said, Iqaluit’s current sewage effluent deposited in the bay has:

BOD means that whatever oxygen is not supplied by aerators during sewage treatment has to be taken out of the water of the bay by bacteria operating there. And that means less oxygen available for fish and other marine animals.

If it works as well as Bionest is confident it will, the company hopes the city will contract it to retrofit the present plant with Bionest’s own patented technology and get it up and running to treat all the city’s sewage.

It’s possible Apex, and maybe even other future subdivisions, could have their own Kodiak containerized systems.

Bionest also hopes other northern communities — in Nunavut, Nunavik, and throughout northern Canada — will be interested in the Kodiak system.

The container was shipped up earlier this summer on the sealift, and Baillargeon spent three weeks in Iqaluit working on installation.

That included meetings with the city’s Engineering Committee, and with members of the Nunavut Water Board and Environment Canada to get authorization for the pilot project. Delays there mean Baillargeon will have to return later this month to finish hooking everything up.

It should be up and running by early October, he said.

Bionest is providing the Kodiak container on loan for a year at no cost, and the city is spending an estimated $60,000 to install and run it for the pilot.

The Kodiak, a modified seacan, which seems tiny next to the massive plant, should be able to treat up to 20,000 litres of sewage a day.

But the point is simply to demonstrate how well the system works.

Bionest came to council with an introduction from longtime Iqaluit businessman, Jacques Belleau, who is working as a consultant with the company.

After spending more than $7 million, the city ended up with an unfinished facility with serious design defects requiring at least $3.3 million worth of repairs.

The installation still sits idle, with only a filter to screen out the larger particles before the effluent is released into Koojesse Inlet.

This pilot project is showcasing the self-contained Kodiak system, which houses all the components in one insulated seacan assembled at the head office in Grand-Mére, Quebec, and installed intact into remote sites like northern mining camps.

But the Bionest system will work with just about any size or type of tank, Baillargeon said, from individual household septic systems, to Iqaluit’s two, so-far-unused, 390-cubic-metre tanks, plus two more at 126 cubic metres.

Retrofitted with the Bionest system, Baillargeon calculated the plant should be able to treat all Iqaluit’s sewage to the desired 20-20-10 parameters.

The Bionest system is now being used in up to 60 per cent of new individual home septic systems throughout Quebec, Baillargeon said.

The company also has various-sized installations throughout the province, across Canada, and in the Caribbean, Dubai and France.

And company head Yves Garceau is particularly interested in expanding into northern Canada, having served as a manager with Air Inuit on the Nunavik coast of Hudson Bay back in the early 1990s.

In the “activated-sludge” sewage-treatment system that is most common throughout Canada, free-floating bacteria break down and digest the raw sewage in open lagoons.

The Bionest alternative is to fill the enclosed tank of its “bioreactor” with a linguini-like tangle of extruded ABS plastic film, that gives the bacteria somewhere to anchor and grow.

The only other thing the bacteria needs to function is oxygen, provided by air pumps, much like in an aquarium.

The inert, non-biodegradable plastic in each cubic metre of water provides 100 square metres of surface for the bacteria to live on.

All of which makes the Bionest system more efficient than activated sludge systems. Not as efficient as Murray Hill’s proposed reverse osmosis system, but much less expensive, and easier to install and operate.

After receiving that report — and based on how well the pilot project is working — council could then set terms of reference for the project, and Bionest (and theoretically others, although Bionest holds a patent on this particular system) could submit a bid.