Silla + Rise get their groove on in the nation’s capital 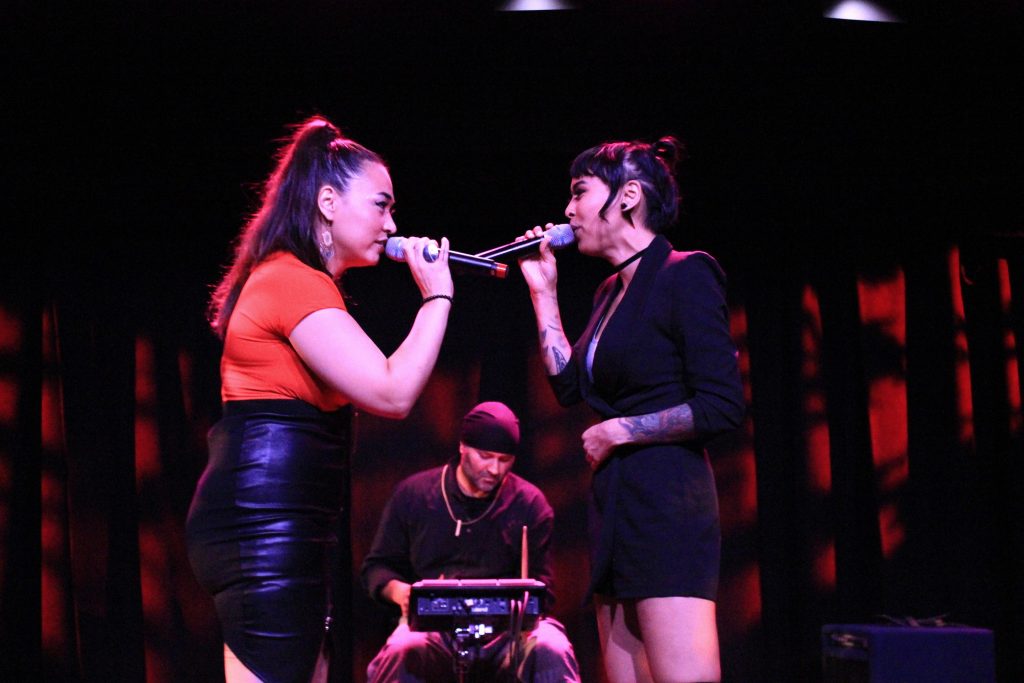 Silla + Rise, aka Charlotte Qamaniq, Rise Ashen and Cynthia Pitsiulak, perform at the National Arts Centre’s Fourth Stage last year. The group is one of many scheduled to play Alianait’s virtual arts festival on Nov. 21 and 22. (Photo by Lisa Gregoire)

Silla + Rise set the stage on fire at Ottawa’s National Art Centre Saturday night with a show that was sexy and primal and rhythmic.

The sound punched through the chest and fanned out through the hands and feet. It tickled the tiny bones in the ears and moved people’s bodies, rocking them in their chairs, coaxing them to the dance floor and transporting them to another world.

“It’s very different than what I thought it would be,” said van Wijk, 82, who attended the show with her sister Iet van Lidth de Jeude, 81. “I’m used to classical music. But it’s wonderful to hear something so different.”

Silla + Rise, a throat-singing trip-hop trio made up of Charlotte Qamaniq, Cynthia Pitsiulak and Rise Ashen, an Ottawa-based DJ, mix master and producer, performed Sept. 14 as part of the NAC’s Mòshkamo Indigenous Arts Festival, an 18-day run of concerts, plays and other performances featuring Indigenous artists.

Van Lidth de Jeude was visiting from Holland and her sister wanted to treat her to a night out at the NAC. Neither had ever seen Inuit throat singing before so they thought it might be interesting.

Qamaniq and Pitsiulak—aka Silla—clutched and swayed, called and responded, danced and laughed, and breathed new life into ancient songs, conjuring, with the help of Ashen’s electronic rhythms, a richly layered cosmic soundscape that was captivating and danceable. They also performed some of their own compositions such as the haunting Qallupilluk. 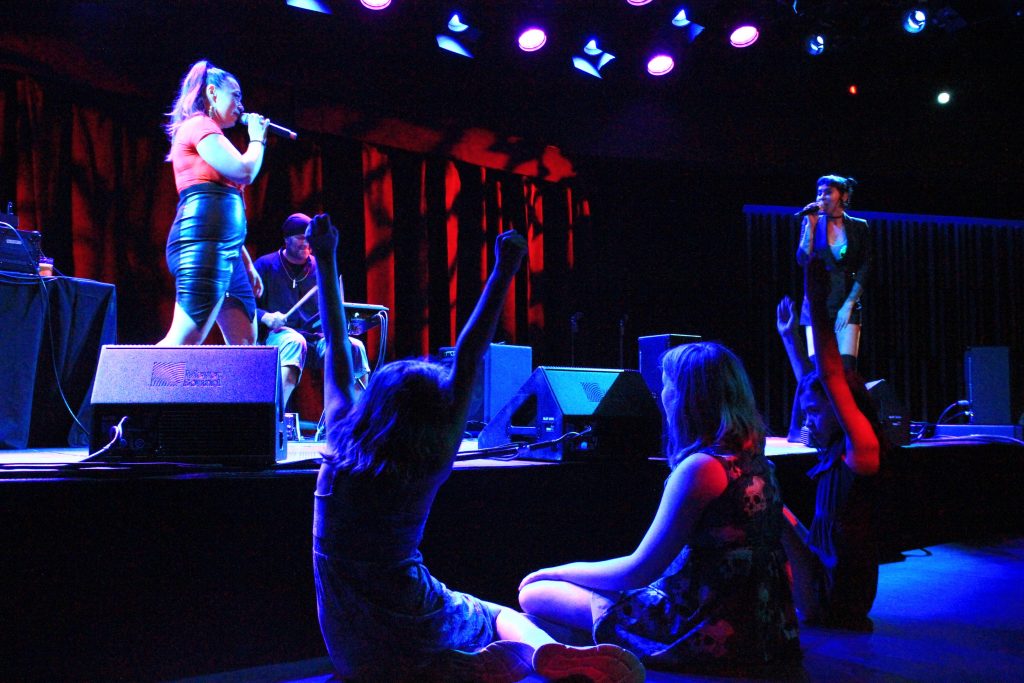 Eliza Mather, on the floor, far right, and her friends cheer during a Silla + Rise show at Ottawa’s National Arts Centre Sept. 14. Mather is the daughter of Charlotte Qamaniq, on stage, left. (Photo by Lisa Gregoire)

“The music is quite primitive, yes?” said van Lidth de Jeude during intermission. “I think it’s interesting to see how they change it to make new music.” She said her late husband’s work brought them to tropical countries and the music reminded her of Indigenous music and culture she’d experienced there.

“The music at the beginning was too loud for us,” said van Wijk, smiling, referring to Ashen who was spinning Indigenous beats on two turntables before Silla joined him on stage. When asked to describe what she’d experienced, she paused, smiled and thought it through. “This is really modern. You hear other music in it as well. Throat singing is evolving, isn’t it?”

The trio have been performing as Silla + Rise since coming together for a show at the Museum of Nature in April 2015.

Their self-titled debut album—made on a lark after Ashen decided to press record on their jam sessions—was nominated for a Juno in 2017 for Indigenous Album of the Year and they’ve been performing at festivals and clubs around Ottawa ever since. Those shows have helped them build a young fan base.

“The energy they bring when they come together, it’s really unique and beautiful and elemental,” said Kado Dwivedi-Shrestha, who was seeing the band for the third time.

Her friend Uzma Chowdhury had to search for words to describe how the show impacted her. 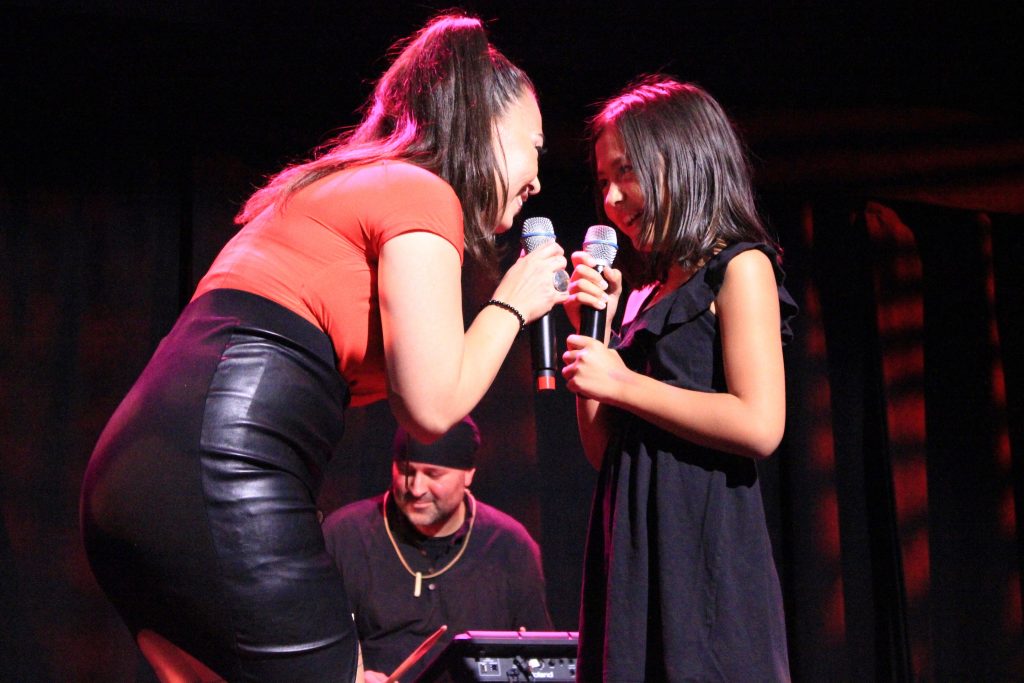 Charlotte Qamaniq and her daughter Eliza Mather, 10, do some impromptu throat-singing during a Silla + Rise performance Sept. 14 at the National Arts Centre in Ottawa. (Photo by Lisa Gregoire)

The NAC is the capital city’s premier performing arts venue and as such, has the power and the subscription base to introduce mainstream theatre-goers to unique art forms they might not normally seek.

“Indigenous people represent!” Pitsiulak called out to the crowd after praising the NAC for showcasing the richness and diversity of contemporary Indigenous talent. “This is our time to shine.”

By showtime, it was standing room only at the NAC’s Fourth Stage, an intimate cabaret-style venue with café tables and chairs. The audience, about 100 strong, ranged widely in age from young children to seniors and included a few Inuktitut speakers.

Three children spent most of the night barefoot and dancing on the dance floor or else sitting in front of the stage, bringing a casual and decidedly Nunavut small-town, community-hall feel to the show.

One of those children, Eliza Mather, 10, was Qamaniq’s daughter.

“I know you!” Mather called out from audience after their first song.

“And who are you?” Qamaniq asked.

“I know someone famous.”

Qamaniq then called Mather up on stage for some impromptu throat-singing. Their efforts were met with thunderous applause.