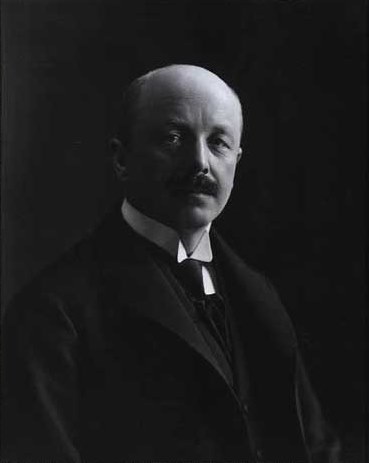 Baffinland Iron Mines Corp. originally proposed a rail link to a terminus and port at Steensby Inlet in northern Foxe Basin before shifting its attention north to Milne Inlet.

But Steensby Inlet continues to occasionally be mentioned as a viable alternative to the northern port.

So who – or what – was Steensby, and why is the name on the map of northern Canada?

Hans Peder Steensby was a Danish ethnologist and geographer, born in 1875 as Hans Peder Jensen. When a young man, he changed his surname to Steensby, after the parish where he was born. Professionally, he developed an intense interest in the origins of Inuit culture.

Steensby never visited northern Canada – his Arctic experience was confined to Greenland – but he was well-read on Arctic exploration and ethnography. He knew, as did all scholars, that the Inuit of Greenland had migrated eastward from the lands that are now northern Canada. And so he developed a theory as to where their unique Arctic culture had developed.

It was, he theorized, originally not a maritime culture at all, but had developed in the interior of northern Canada near Great Slave Lake. Only later, he thought, had it spread to the coast and adopted its unique adaptation to maritime conditions.

He expressed all these ideas in his PhD thesis at the University of Copenhagen in 1905. It was eventually published for a wider audience in 1916.

In 1909, on an expedition to the Thule District of northern Greenland, Steensby met the young ethnologist and adventurer, Knud Rasmussen, who was of Danish and Greenlandic origin. Rasmussen spoke Kalaallisut and was at home in the Arctic. He was interested in all aspects of Inuit history and culture. He listened to Steensby and became convinced that his theories were correct. And in his mind a plan developed to investigate Inuit origins and prove the truth of the scholar’s ideas.

Rasmussen proposed an expedition to Arctic America, on which he would visit as many isolated Inuit groups as possible. But it would take over a decade for him to actually carry this plan through to fruition.

In 1921 he and a group of Danish scientists and Inuit assistants from Greenland finally launched the Fifth Thule Expedition. Its base of operations was a small island they called Danish Island, near present-day Naujaat, formerly known as Repulse Bay. This year marks the 100th anniversary of the beginning of that major cultural initiative, which lasted three years. 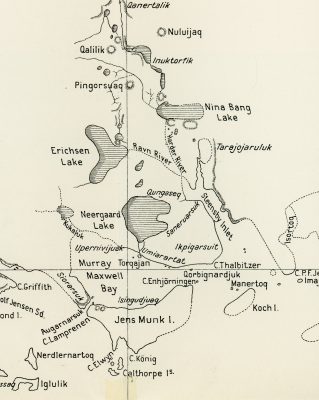 Section of the map of Steensby Inlet area made by Therkel Mathiassen and Peter Freuchen. (Source: Report of the Fifth Thule Expedition 1921-24, Vol. 1, No. 2)

In 1922 Rasmussen and the Danes Kaj Birket-Smith and Helge Bangsted, accompanied by the Greenland Inuk Qaavigarsuaq, travelled south, then inland to visit the Inuit around Lake Hikuligjuaq (Yathkyed Lake), south of Baker Lake.

The theory they were testing was neatly summarized by the anthropologist Tiger Burch in 1988:

“The original Eskimo culture was of an exclusively inland type … located somewhere in the northern interior of Canada. Either led by the caribou or driven out by hostile Indians, the original Eskimos moved to the central Arctic coast between Coronation Gulf and Boothia Peninsula. From that point, they spread westward into Alaska and eastward into Greenland. Later on, a new form of Eskimo culture developed around Bering Strait. This new culture was spread eastward by migration across the North American Arctic to eastern Greenland, and westward to easternmost Asia.”

But one group of Inuit had stayed put. They remained in the “barren grounds” west of Hudson Bay. Their descendants were the people Rasmussen was visiting. He called them “The Caribou Eskimos.”

After investigating and documenting the culture of these isolated Inuit, Rasmussen and Birket-Smith were convinced that Steensby had been right. But in fact, they were wrong. They were blinded by the desire to believe. They let their preconceived notions colour their interpretation of the data they collected, instead of letting the data form the basis of a theory, which should have differed radically from Steensby’s.

Ironically, it was Rasmussen’s and Birket-Smith’s colleague, archeologist Therkel Mathiassen, who challenged their theories. On the basis of his work at Naujaat and Pond Inlet, he showed that the original Inuit culture – what became known as the Thule Culture – had originated in Alaska and spread eastward across Canada and into Greenland.

Nonetheless, Inuit and modern scholars are heavily indebted to Rasmussen for the work he did in documenting Inuit cultures on the brink of change. Whether it be the Iglulingmiut and Aivilingmiut, the Nattilingmiut (Netsilingmiut), the Caribou Inuit, or the Inuinnait, Rasmussen visited them all at the eleventh hour, before a tide of explorers, prospectors, missionaries, police, and traders swept into their lands and brought irreversible change.

Steensby’s theory fell from favour. He is little known today. Rasmussen’s reputation, on the other hand, rose and he became a national hero in Denmark and Greenland. He deserves to be more widely known in Canada.

Steensby knew nothing of the downfall of his theory after the Fifth Thule Expedition for he did not live long enough to see even the beginning of that expedition. In 1920 he died of a heart attack aboard ship while returning to Denmark from North America where he had been researching the Vinland sagas.

Ironically, it was Therkel Mathiassen who put Steensby’s name on an inlet reaching into northern Baffin Island at the northern end of Foxe Basin. His justification for the “new names” he added to the map was simple: he named places “often after persons who in some way or another have supported or helped the Expedition or done deserving work in arctic-geographical research.” 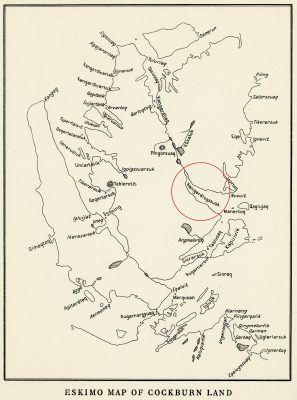 This map was drawn for Mathiassen by the Inuit prophet, Umik, who brought Christianity to the Iglulik area. Steensby Inlet, called by him Kangerdlugssuak, is circled in red. Cockburn Land is an old name for northern Baffin Island. (Source: Report of the Fifth Thule Expedition 1921-24)

Mathiassen noted that the inlet had an Inuktitut name, Kangerdlugssuaq in his spelling. He justified not using the Inuktitut name because “their uniform character often makes them unpractical.” He elaborated on what he meant by that: “for instance, words like Kangerdlugssuaq (the large fjord) … are much too common and frequently used.” In other words, to use only the Inuktitut names would result in their being too many places named Kangerdlugssuaq on the map. This is a valid argument that, in my opinion, has never been adequately addressed by Inuit Heritage Trust, charged today with adding Inuit names to the modern map of Canada.