One student alleged to have dragged teacher by the hair

Staff at Tuugaalik High School in Naujaat say they are looking for support from the Department of Education after two teachers were assaulted by students last week.

The school, which serves about 200 students, is to be closed on Monday afternoon.

This is to allow for a staff meeting with two Education Department officials, namely, Sonia Osbourne, superintendent of schools for Kivalliq School Operations, and Bill Cooper, the KSO executive director, who were to travel to the Kivalliq community of about 1,100 people.

The first violent incident, alleged to have occurred on Wednesday, Feb. 26, involved an attack by a student on a male acting principal, say sources close to the school who are not authorized to speak to the media and who fear retribution if identified.

Other students intervened by separating the pair, and counsellors arrived to calm the student, eyewitnesses said. 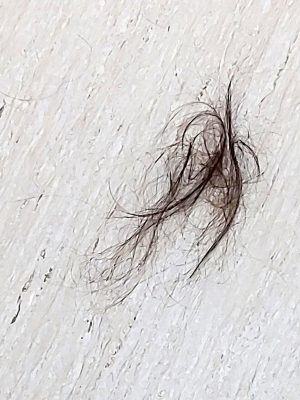 This clump of hair is among many that were seen on the floor of a classroom at Naujaat’s Tuugaalik School, shortly after a violent altercation there on Feb. 28. (Submitted photo)

The second incident took place on the afternoon of Friday, Feb. 28.

Sources with knowledge of the incident say that this attack happened following a conversation in a classroom about religion.

The student is alleged to have said that he would show the level of pain that the teacher could expect to suffer.

Sources said he jumped up and started to drag the teacher around the classroom by his hair.

Clumps of the teacher’s hair were strewn around the classroom, where they were later photographed.

The goal of the GN visit is to lead a staff workshop, says a letter that Cooper sent to school staff on Feb. 28, which has been shared with Nunatsiaq News.

The workshop aims to help staff “succeed at preventing and surmounting challenges” and build a more “positive and stimulating outlook.”

The sources close to the school, who are not authorized to speak to media, say the letter appears to blame teachers for the recent violence.

The RCMP said on March 5 that the Naujaat detachment’s investigation was complete and that no charges would be laid against the students involved in the incidents.

The alleged attacks on teachers come after a difficult start to the school year, which saw intimidation, harassment and bullying, sources say.

The school principal has been on leave since November, they say.

The Department of Education said in an emailed statement, attributed to Education Minister David Joanasie, that it “is aware that two incidents took place last week at Tuugaalik High School in Naujaat.”

“The Department of Education takes violence in our schools very seriously, and works closely with partners such as the Nunavut Teachers Association and the Department of Human Resources to deal with any incidents that occur,” it said.

“Any violent incidents involving students in schools is addressed using each DEA’s Inuuqatigiitsiarniq policy, and my department works with schools to create and maintain positive school environments.

“To protect the privacy of those involved, the department cannot speak to the details of these or other incidents.”

The Nunavut Teachers’ Association “has not [been] made aware by the Department of Education, school(s) in Naujaat or any teacher about any violent incidents in Naujaat last week,” John Fanjoy, the NTA president told Nunatsiaq News in a March 2 email.

“The NTA believes that violence in our schools is increasing, and is not acceptable,” he said. “More needs to be done to support positive learning environments in our schools for students, and safer working conditions for our teachers. ”

Fanjoy said the NTA is currently working with the Education Department to develop a unified reporting mechanism for violent incidents that is detailed and will provide real data on what circumstances students and teachers are facing in Nunavut schools.