“You’re going to have naysayers no matter what” 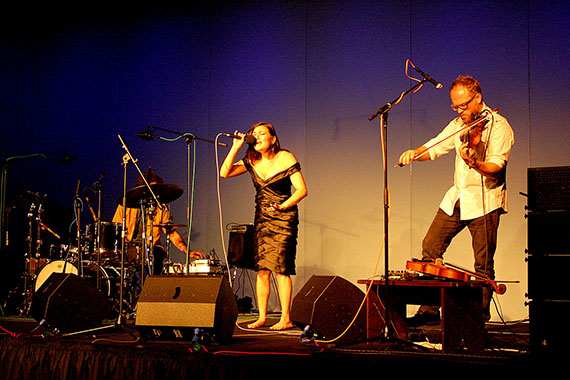 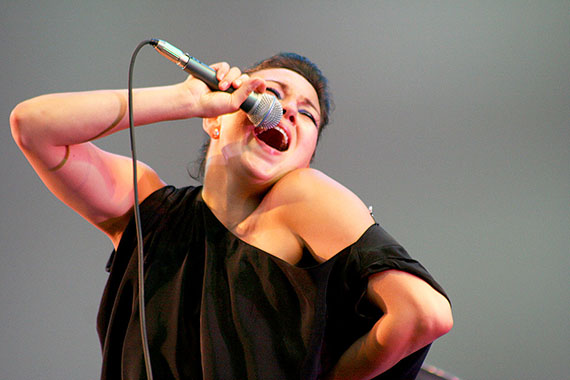 Nunavut’s most famous throat-singer, Tanya Tagaq of Cambridge Bay, performed two free shows in New York City last week. The first, held Aug. 19, at Lincoln Center Out-of-Doors. The second was held Aug. 20, in the Dyker Pavilion, at the Smithsonian Institute’s National Museum of the American Indian. Both days were hot and humid and Tagaq, 34, joked with the crowd that she has experienced temperatures as low as -88 degrees Celsius, which she prefers. (PHOTO BY JUSTIN NOBEL)

“I am so happy to be here, even though I’m melting,” said Tagaq, her cheeks red from the heat. “Can someone build me an igloo?”

The 34-year-old throat-singer was barefoot, wearing a black dress that revealed most of her back.

Despite the heat, New Yorkers packed onto a lawn framed by a ring of skyscrapers, part of Lincoln Center for the Performing Arts.

Backed by a drummer and a viola player, Tagaq unleashed a sensuous and animal-like stream of sound.

And many in the audience looked astonished that a human being could even produce such noises.

By the end of the show, some audience members were disturbed, and some were in tears.

Tagaq’s unique vocals have helped establish her global success but have also gained her a group of critics back in Nunavut.

“Some girls back East get pretty mad,” said Tagaq, referring to Baffin Island throat singers who believe she has forsaken the traditional form.

“But you’re going to have naysayers no matter what,” she added. “You just have to ignore them.”

Tagaq grew up close to the land, hunting and fishing with her father, who ran a camp for cadets. She didn’t begin throat singing until her mid 20s— her first performances were alone, in the shower.

Her big break came at the Great Northern Arts Festival, in 2000, when she filled in for a performer who didn’t show.

Two men in the audience relayed the recording to the Icelandic rock superstar, Bjork. The following year, Bjork invited Tagaq to join her on tour.

“It was all a fluke,” said Tagaq. “It went from nothing, to this is my career.”

And her fame has made her face familiar to people far from Cambridge Bay. One fan even spotted her on Wreck Beach, a stretch of sand in Vancouver where clothes are optional.

Tagaq says that when she returns to Nunavut she is just another young Inuk mother, although her five-year old daughter, Naia, is unique. The girl’s father is Basque, part of a rebellious ethnic minority that inhabits a remote mountainous section of Spain.

“I think she’s the only half-Inuk, half-Basque baby,” said Tagaq.

In Cambridge Bay, where she spends about half the year, Tagaq helps young girls sort through the dramas of adolescence and teaches them how to throat sing.

Tagaq regrets that she never learned the art earlier. “There are elements of our culture that are definitely dying,” she said. “It’s kind of depressing.”

Not everyone in Cambridge Bay is welcoming, though. One local woman calls Tagaq the “devil singer” and removed her daughter from school the day she served as a substitute teacher.

Tagaq tries to ignore such attacks. “I need to be happy and calm to have my creativity come to me,” she said. “If you’re blocked, it doesn’t come.”

The Arctic landscape is the source of much of her inspiration.

“Weirdly enough, all my songs happen on a Ski-Doo,” she said. “Sometimes, I can feel—I wouldn’t say spirits, that’s cheesy—but dark, something really dark. I get tingly all the way up the back of my neck.”

As much as she loves being out on the land, cities attract Tagaq too. “I like places either huge or teeny, teeny, teeny,” she said.

“Cambridge Bay and New York feel the same to me,” she continued. “I know that sounds difficult to believe. But, when you are on the land it seems like nowhere else exists. Times Square is the same way.”

Tagaq’s second New York performance of last week was in a dim circular auditorium lined with Native Americans artifacts, at the National Museum of the American Indian, in downtown Manhattan.

Again, the audience was flabbergasted. Two elderly women in sandals with ponytails of long black hair were the first to rise for a standing ovation.

Both women are Native American playwrights, originally from a tribe that inhabits the jungles of southern Mexico, near the Guatemala border.

One of the women, Elvira, wore earrings of white stone, shaped like feathers. She said that Tagaq’s singing reminded her of a story within her own culture in which a town is massacred and a woman wails for the loss of her child.

Elvira’s friend, Hortencia, was equally impressed. She said that Tagaq’s performance had inspired her to produce a piece of her own about the wailing woman.