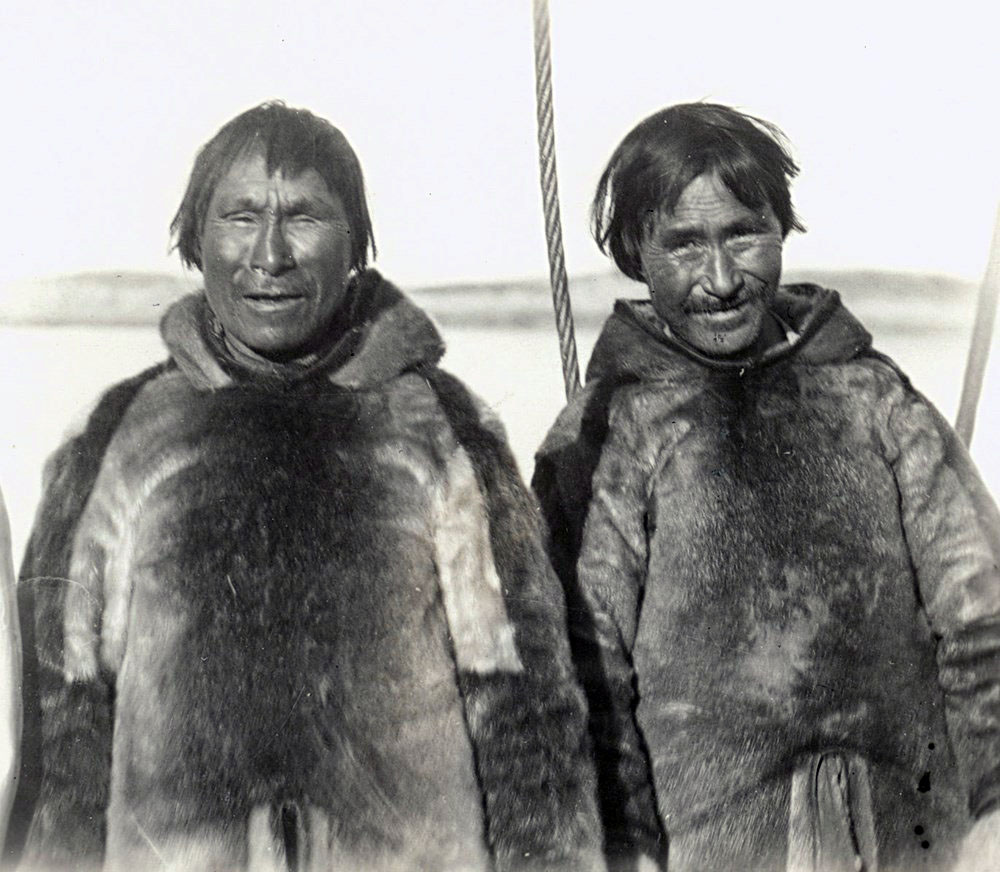 Tulugarjuaq on the left, with another man, Angutirpiaq. (From the General Synod Archives, Anglican Church of Canada)

It was always the goal of the Anglican Church Missionary Society that its missionaries at Blacklead Island—near present-day Pangnirtung—would train a small cadre of Inuit catechists to carry on the work of the church when there were no missionaries at the station, and to advance the work of the mission into areas where white preachers had not ventured.

Tulugarjuaq was one such Inuit leader. He had been born in Cumberland Sound during the heyday of whaling activity, sometime around 1860, and achieved a position of importance in that industry in adulthood. 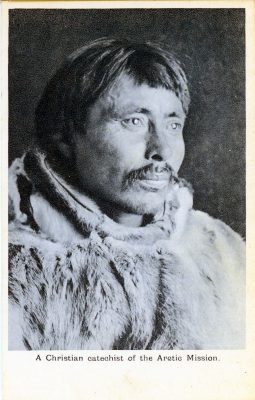 He was not among Rev. Edmund Peck’s earliest converts at the Blacklead Island mission (established in 1894), and was probably an angakkuq—a shaman—who opposed the missionaries in the beginning.

But, with one other man and five women, he converted to Christianity on Feb. 9, 1902. His wife, Angalik, was known to be an angakkuq for some time after her husband’s conversion.

(There are various spellings of this man’s name in church records, including Tooloakjuak and Tooloogarjuaq. I have used the modern spelling Tulugarjuaq throughout.)

Peck mentions Tulugarjuaq favourably in his journal in November 1903: “Had one of the men with me who has long been a subject of prayer.”

Peck invited him to become a teacher and the man readily agreed. He went on:

“Tulugarjuaq—for this is the name of our friend—is one of the most promising candidates for baptism, has a good rapport amongst the Eskimo, and is in many ways, a very reliable man.”

Once he began leading prayer meetings that fall, men finally began attending evening services. Peck’s fellow missionary, Julian Bilby, described him as “a quiet, pleasant man, and respected by his fellow men, both for his generosity in times of need and for his good hunting qualities.”

The following Sunday, which Peck described effusively as “a day of days,” Tulugarjuaq was appointed a teacher in front of a large congregation. He read a passage from the Bible in Inuktitut, after which Peck spoke to the people “of the necessity of teachers being raised up from their own people.”

Tulugarjuaq was baptized on Feb. 21, 1904. He read to the congregation from Acts 9, verses 1 to 10, and then spoke to the assembly about St. Paul’s conversion. Peck noted:

“How the people did look and listen as he exhorted them to turn to Jesus. The whole service was one of power and blessing.”

One has to wonder what this little congregation on windswept Blacklead Island in mid-winter actually understood of the conversion of a man in a far-off Mediterranean country almost 2,000 years earlier.

In addition to his role as a teacher among the Inuit, Tulugarjuaq remained active as a hunter, and became captain of a whaleboat later that year.

But hunting trips were also occasions for ministry; as Bilby wrote: “While all the men were at the floe-edge he held services for them.”

His name appears often in Bilby’s reports, and in those of Greenshield. In 1911, when Edgar Greenshield, the last Qallunaaq missionary to live at Blacklead, returned to the station, which had had no white missionary for a year, he wrote:

“I found the church, house, hospital and store all in perfect order, they having been again taken care of by our Senior Native Teacher, Peter Tulugarjuaq.”

With the mission closed and whaling at an end, Tulugarjuaq and his extended family left Blacklead Island in 1923 and settled at Qimmiqsut in a camp that numbered about 70 people at its maximum. He was about 65 years of age and his influence as a camp boss was beginning to wane.

But he continued to preach. One elder recalled simply, “He converted many people to Christianity because he talked like a great preacher.”