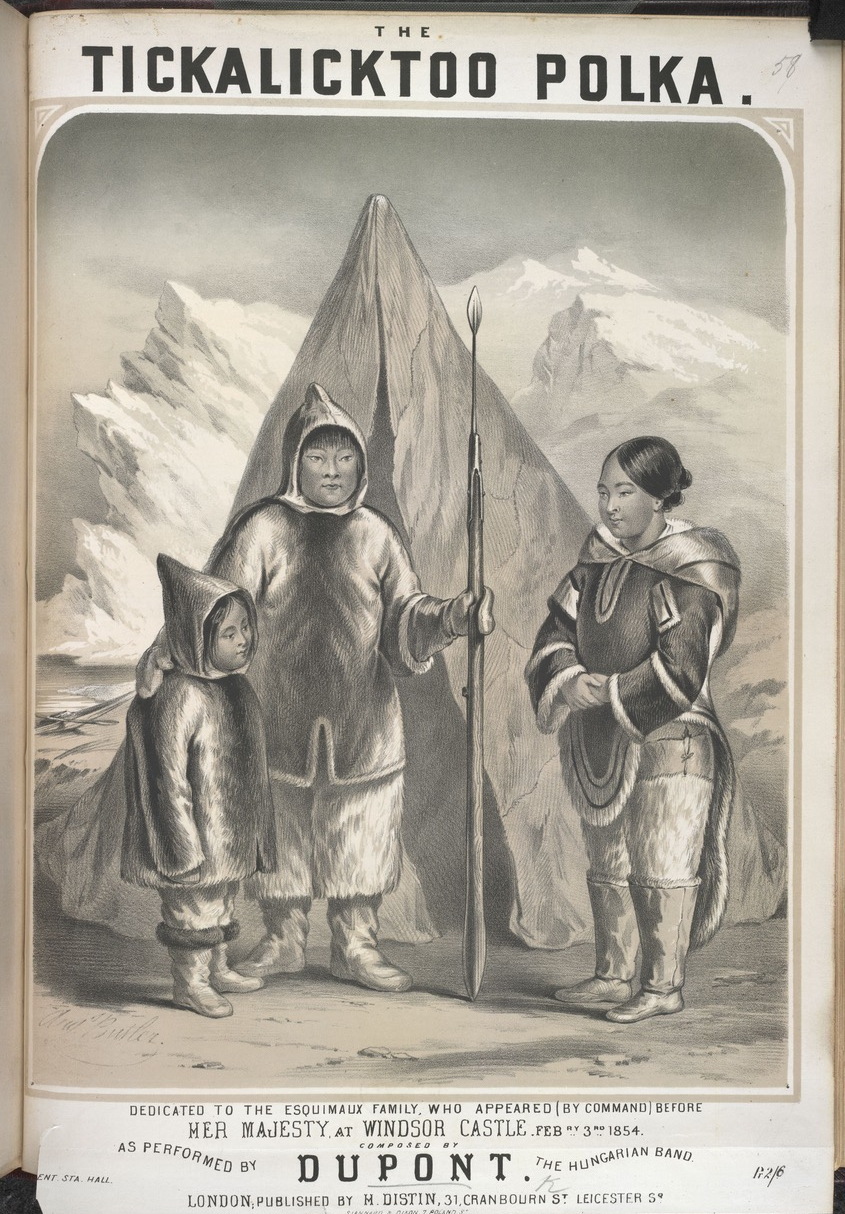 Tookoolito, Ebierbing and Akulukjuk in England on the occasion of their presentation to Queen Victoria in 1854. (Photo from the Harper collection)

In 1853, John Bowlby, a British wine merchant who wished to establish a Christian mission to the Inuit, arrived in Cumberland Sound on his small ship, the Bee. There he met two remarkable young Inuit, both teenagers.

Bowlby was impressed with these two young people, and invited them to visit England with him. A young boy from another family, Akulukjuk, went with them. They lived in Hull with William Gedney, the ship’s surgeon, and his family.

There was much interest in England at the time in things to do with the Arctic. Much public attention was given to the search for Sir John Franklin’s missing ships and crew, which had disappeared in search of the elusive Northwest Passage. By 1853, at least 20 British expeditions had gone in search of Franklin, and the British public seemed to have an insatiable appetite for news of the search and speculation as to the Franklin expedition’s fate.

Ethnographic exhibitions were very popular in England at that time. And so, distasteful as that is to us, it was inevitable that Tookoolito, Ebierbing and Akulukjuk would be put on display in various places dressed in their native costumes.

In early October 1853, newspapers reported that John Bowlby planned to introduce the Inuit to the Queen, but it was almost four months before the event actually happened.

Friday, Feb. 3, 1854, was a day like any other for Queen Victoria and her consort, Prince Albert. In the morning the Queen rode on horseback, while the prince went hunting. Later in the morning, Robert Bowser, treasurer of the Hull Zoological Gardens, presented the Inuit, who were apparently under his management for a series of exhibitions. Bowser was accompanied by John Bowlby, Leicester Buckingham (a lecturer who accompanied the exhibition), and William Gedney, who acted as interpreter.

The Inuit and their entourage arrived at Windsor Castle a full two hours before their presentation. The Inuit were dressed in their sealskin costumes. The staff showed the Inuit group and their hangers-on through the castle, including the state and private apartments, and hosted them at a luncheon. Finally, they were presented to the Queen, Prince Albert, and their daughters the Duchess of Kent and the Duchess of Sutherland, among others. Bowser presented the Queen with a pair of slippers that Tookoolito had made. Prince Albert and the Duchess of Kent asked Gedney several questions about the Inuit and their country and, a report notes, “the whole party appeared to be much interested in the information which those queries elicited.” The presentation lasted 20 minutes.

The Queen and Prince Albert were preparing to celebrate their fourteenth wedding anniversary the following Friday, and much was made of the fact that Tookoolito and Ebierbing were also married. One source says they had been married for “above two years,” which would mean they had been married according to Inuit custom before they left Cumberland Sound. Another source says they were married in England, but documentary proof of that has never been found.

Queen Victoria was of the opinion that this group of Inuit were the first of their people ever to visit England, although there had been a number of other Inuit there, some willing, some kidnapped, since the days of Martin Frobisher. She recorded in her journal:

“Had seen before luncheon 3 Esquimaux, a married couple, & a little boy, natives of Keimenksoka & Newganemyatt, on the West coast of the Cumberland Straits, Davis Straits. They are the 1st to have ever come over. They belong to a very poor tribe of about 500 or 1000 & have been brought over, in the hopes of raising funds to assist them. They are my subjects, very curious, & quite different to any of the southern or African tribes, having very flat round faces, with a Mongolian shape of eyes, a fair skin, & jet black hair. They are entirely clothed in skins. The boy is a pretty little, red-cheeked, black-haired thing, 7 years of age, the man 18, and the woman 16.” [Journal of Her Majesty, Queen Victoria, 3 February 1854, Royal Archives, Windsor Castle.]

Robert Bowser received 25 pounds for his effort in presenting the Inuit family, a not-inconsiderable sum in those days. Three weeks after the presentation, Col. Phipps wrote to Bowser, asking if “photographic likenesses” had been taken of the group. Bowser replied that no photograph was yet available, and there is no indication that any were subsequently provided. He sent instead six copies of a specially composed piece of music, the “Tickalicktoo Polka,” with lithographic likenesses of the Inuit on the cover.

Tookoolito, Ebierbing, and Akulukjuk were lucky. Many Inuit taken to England by whalers and explorers died of diseases acquired there, to which they had no immunity. But this group all returned safely to Cumberland Sound in 1855. Tookoolito and Ebierbing went on to work as guides and interpreters with American explorers and became the most well-travelled Inuit of the nineteenth century.