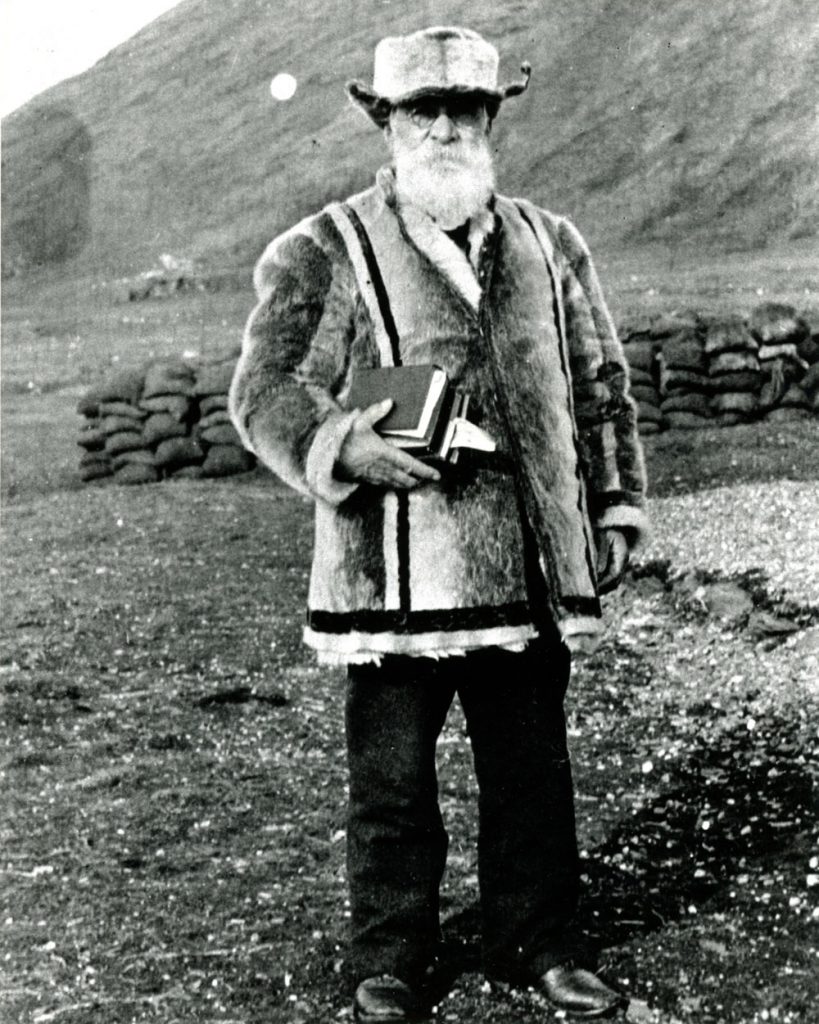 The Rev. Edmund James Peck. Known as “Uqammak,” or the one who speaks well, he opened in the first Anglican mission in the Baffin region. (Harper collection)

In 1901, the Rev. Edmund James Peck was joined at his mission on Blacklead Island by a young Englishman, Edgar Greenshield. Under Peck’s tutelage, any new missionary’s first task was to learn the Inuktitut language.

On Jan. 26, 1902, Peck explained in his journal the methods he used to assist Greenshield in his language learning efforts, and to continue his own learning, even though he had arrived at Blacklead already fluent after almost two decades of service in northern Quebec.

“Good use is made of the native voice. We always have an Eskimo with us, and we vary our Eskimo teachers, for it by no means follows that if a person understands one Eskimo, he can understand all.”

This is good advice. A corollary of this is that not all Inuit are equally good teachers.

This explains the folly that happened within modern education systems in the Canadian Arctic during the last 30 or so years. Even when Inuktitut was not taught in any grades, many schools brought in local assistants or elders to teach Inuktitut a few times a week.

An assumption was implicit in this, that, just because a person could speak Inuktitut, they could also teach it. Happily, sometimes that was the case.

But, more often than not, it was not. Educators don’t do that in choosing English language teachers. Why should they do so when Inuktitut is the subject?

In Peck’s time, there were no trained Inuktitut teachers. But some people had more innate teaching ability than others. And that was another reason for him varying his and Greenshield’s instructors.

“The grammatical structure of language is attacked as follows:—In one lesson Mr. Greenshield learns a portion of the verb, and in another the adjective or noun. Adverbs of time, place, and interrogation are also committed to memory. This plan enables a student to construct sentences in a short time, and places him in a position to ask questions and get into actual contact with the people.”

In this piece of advice, it is obvious that Peck thinks of the grammar of the Inuktitut language in the same terms as he does English, and describes it using the same categories.

That works for some people. Lucky are those who can learn a language through simply hearing, then mimicking, and understanding without analyzing.

But those learners are rare. Most of us analyze, and we need some way to organize that analysis, mentally or on paper.

I love grammar. Some people hate it. What I’ve quoted was Peck’s method. But today’s learners should do what works best for them.

“Collection of words. These are, as far as possible, taken down from the lips of the Eskimo by Mr. Greenshield, and are finally revised before they are committed to memory.”

Word lists are at the heart of language learning. Learn large amounts of vocabulary, and then manipulate the words, practising them within the context of the grammar that you are simultaneously learning.

Unless you are blessed with a superhuman memory, you will need to write your word lists out so that you can practise them any time. Some people like to learn words thematically—family relationships, animals, land forms, emotions—there are any number of ways to categorize words.

Others learn them randomly, but still write them all down. This is a good practice to follow, especially in the early stages of language learning.

“Exercises in reading. We have one of the Natives who can read well to lead in this.”

In my experience, there is a time for learning to read, but it is after considerable fluency has been developed in speaking.

“We write down accurate accounts given to us by the people, or ask them to write out something relating to their mode of life, religion, etc. These we translate and arrange in a useful form. Several points are gained by this latter mode of study, the principal one being the correct idiom, which, I need hardly say, is an important matter.”

Wouldn’t it be wonderful if these excerpts from individual life stories had been preserved in an archive somewhere? But it seems they have not been. They must have been extremely helpful to Peck and Greenshield in vocabulary building.

Peck concluded his account of his method of helping Greenshield in learning Inuktitut with sage words, in which he recognized that one size does not fit all—that individuals learn in different ways: “Some of my missionary brethren may use different and better methods.”

He noted also that the acquisition of Inuktitut, as with any language, required patient and persevering work.