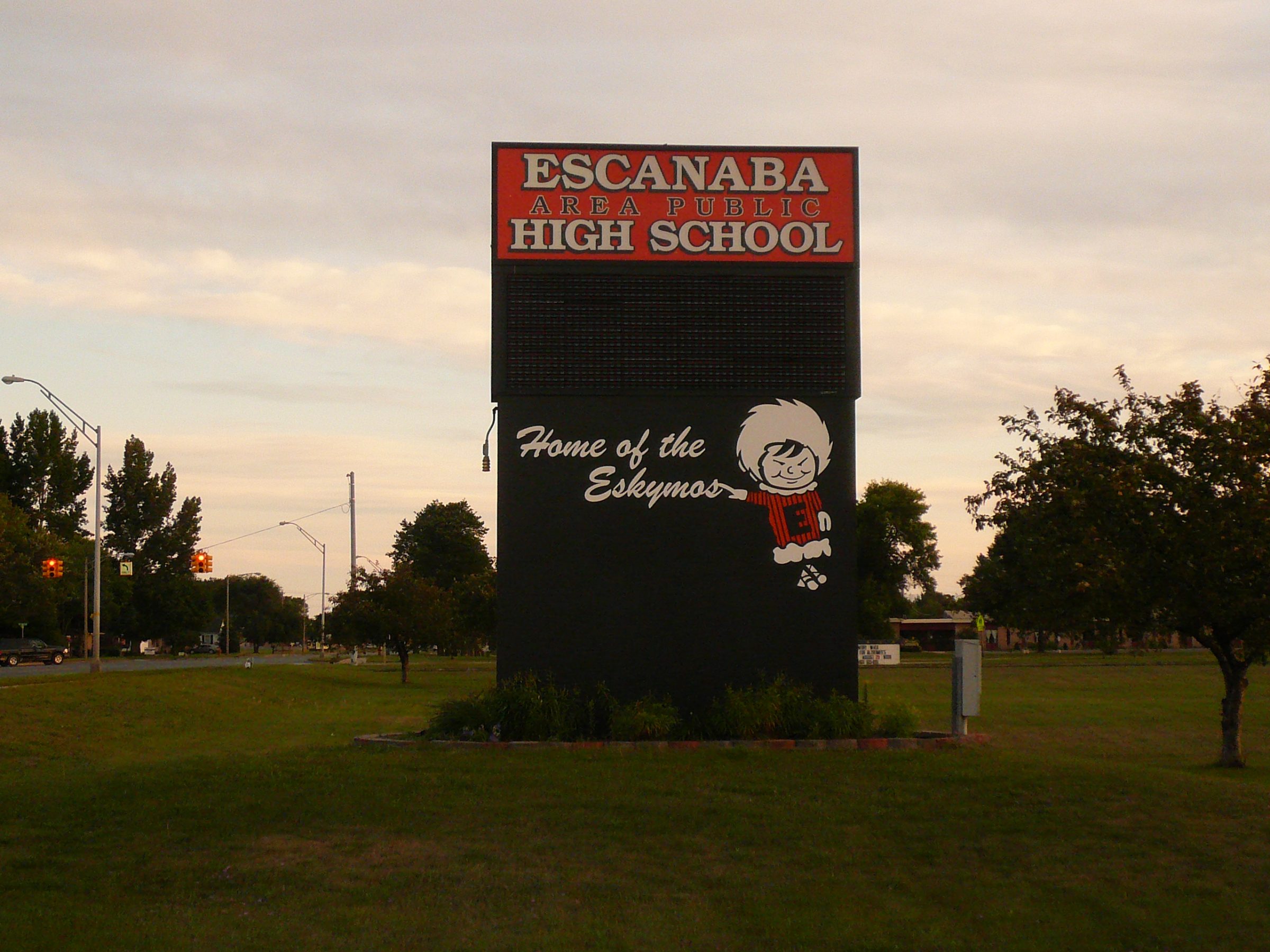 The small town of Escanaba on Michigan’s Upper Peninsula is home to a high school that calls its sports teams the Escanaba Eskymos. (Photo from the Harper collection)

There has been much fuss in the newspapers lately about the name of a well-known Canadian football team, the Edmonton Eskimos. Objection to the name—followed by support for the name, then controversy about the name, then name-calling from both sides—has returned every few years of late. But on July 21, the team announced that they were dropping the word “Eskimo” from their name.

Those opposing the name say that it is a racist epithet, a slur, which treats Inuit as mascots—even though there is no depiction or caricature of an “Eskimo” used in team promotional material, uniforms, or associated paraphernalia. It is a colonial artifact, they claim, and must be retired, just as the name of the Washington Redskins is being retired.

Those supporting the name claim that it is a name to be proud of, that Edmonton adopted and used the name as a tribute to the hardy “Eskimos” and because the city is a gateway to the north. Many of those supporters are Inuit themselves, including some quite prominent in politics and business. Furthermore, say those Inuit, they themselves are proud to be called Eskimos and see no racism implicit in the name. Some comment that the name, which may have a Cree origin meaning “people who eat raw meat” is, in fact, not derogatory but an accurate statement of fact.

And on it went, more tedious and tiresome with every new round of name-calling.

On August 30, 2009, I was driving from Calgary to Ottawa, and took a route south of Lake Superior through the United States. On that evening, I drove into the town of Escanaba, a port city on Michigan’s Upper Peninsula, on the shores of Little Bay de Noc on Lake Michigan. It’s a small town of 12,000 people.

I was there, as a detour on my route to Ottawa, to do a little research in the local library and historical society into an event that had happened in the town in 1911. My research into the life of Nancy Columbia, the Inuit baby born at the Chicago World’s Fair 18 years earlier, had revealed some clues that Nancy and her family had made two movies in Escanaba, early silent films released with the titles “The Way of the Eskimo” and “Lost in the Arctic.” I wanted to know more about these films and their making. 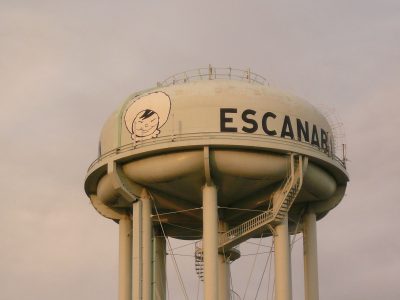 Escanaba’s water tower features the unmistakable caricature of an “Eskimo” looming high over the town. (Photo from the Harper collection)

The first thing that caught my eye as I drove in was the water tower. It bore the unmistakable caricature of an “Eskimo” looming high over the town. I drove through the place to orient myself, noting the location of the library and historical society for my visit the next day. That drive revealed other “Eskimo” imagery. The local Escanaba high school’s sports teams are known as the Escanaba Eskymos. Not just one team, but all of them—the volleyball team, the baseball team, the football and the gymnastics teams, all are called the Escanaba Eskymos.

And, unlike the Edmonton Eskimos, they have an Eskimo caricature as a mascot. His name is “Mo the Eskymo” and he’s been the official mascot for over 40 years. 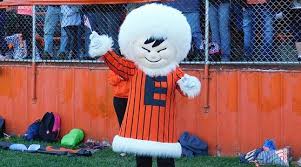 “Mo the Eskymo” has been the official mascot of Escanaba sports teams for over 40 years. (Photo from the Harper collection)

A few years ago, there was an attempt to have the mascot retired and the name changed. For some reason, it was done in association with a move to change another town’s sports names from North Dickinson Nordics. Apparently, to some sensitive Michiganers, “Nordics” is also racist. (The Quebec Nordiques no longer have to worry; they voluntarily became the Colorado Avalanche a few years ago.) Legislation to change the names was brought forward in the state legislature, but was strongly opposed by the state representative who wrote that “this ridiculous bill will not become law.” 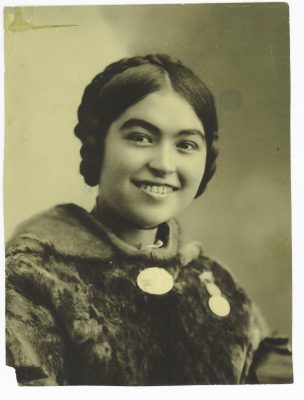 Nancy Columbia and her family had made two movies in Escanaba, early silent films released with the titles “The Way of the Eskimo” and “Lost in the Arctic.” (Photo from the Harper collection)

On June 22, a supporter of the name, Joyce Lewis, wrote online a paragraph on “the history of Mo.” She pointed out that the sports teams were originally called the Hilltoppers, because the old high school used to sit atop a hill. The name was changed around 1929. The writer wrote that the name was changed because local people were aware of the silent movie having been made in 1911, and that “Everyone in town thought Nancy [Columbia] was beautiful and kind. It was thought that our mascot, the Eskymo, was based on this beautiful ‘Eskimo’ woman.”

That’s a lovely story, but I don’t believe a word of it. When I was in Escanaba a decade ago, no-one there had a clue that Inuit (Eskimos) had ever been in the town or that movies had ever been made there.

So why are the teams called the Eskymos? Simply because of alliteration—the similar sound of the first syllable of each word. The phrase has a nice ring—kind of like Edmonton Eskimos. It would be really nice if the name was because of Nancy Columbia, but it simply isn’t.