The travels of an Inuit story 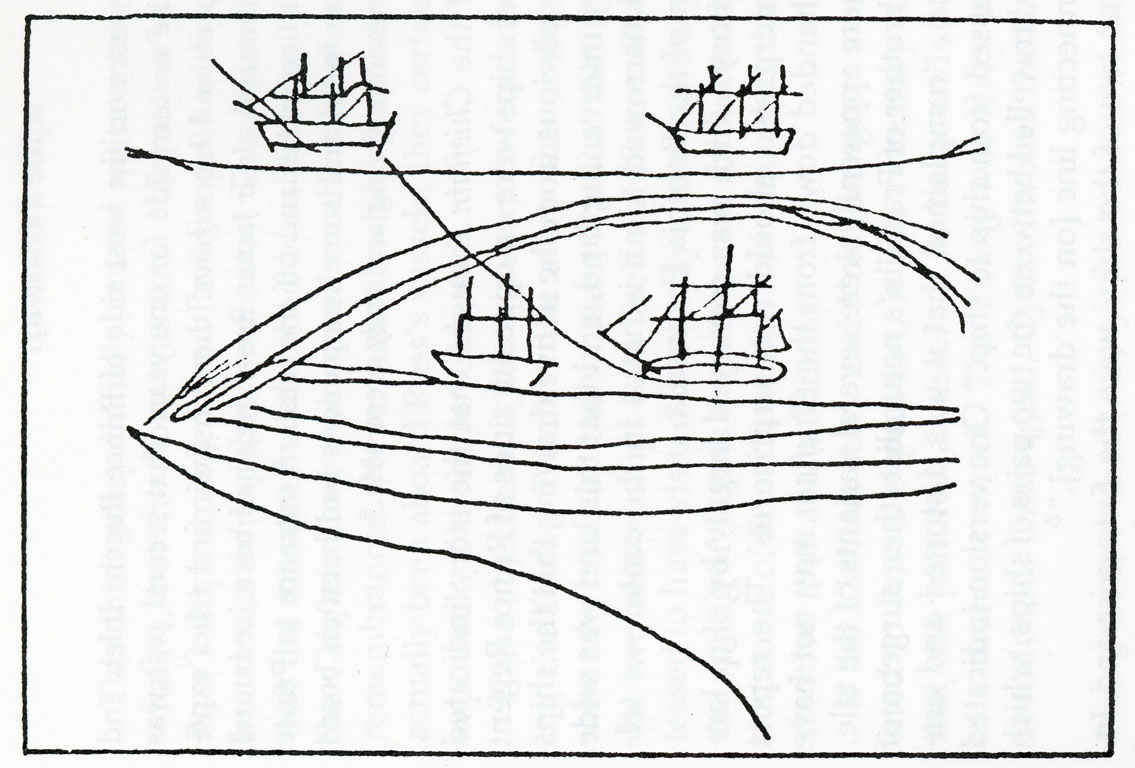 A map made by an Inuit man who boarded the whaling ship Chieftain in 1849, near Bylot Island. (Harper collection)

In the fall of 1849, British whalers returned to port at the end of the whaling season in Davis Strait and Baffin Bay. Among them was Capt. John Parker, master of the famous vessel Truelove.

On his return he sent a rough sketch to the British Admiralty. It had been made by an Inuit man at Pond Inlet, and showed four ships frozen in the ice. The sketch was accompanied by a story, which Parker recounted to the Admiralty.

Capt. Kerr, a fellow whaler, was in command of the Chieftain from Kirkcaldy on Scotland’s east coast that summer. On July 11, Inuit had boarded his ship at Cape Graham Moore, on Bylot Island just north of Pond Inlet.

The Inuit had told Kerr that they had seen and visited two pairs of two ships “several months before,” and that the crews of all the ships were alive and well and in touch with each other, although the ships were “some distance apart.”

From the account, Kerr thought the ships were in Prince Regent Inlet, between the northwest end of Baffin Island and Somerset Island to the west. Kerr entrusted the accompanying sketch to Parker, whom he assumed would arrive in England before he did.

By this time, Sir John Franklin was known to be missing along with all the men on his expedition, with two ships, the Erebus and the Terror. So why should there be four ships seen by the Inuit?

There was an easy answer to that question. The other two ships were assumed to be the Enterprise and the Investigator, which had been sent out the year before under Sir James Clark Ross, in a search for Franklin, and had not yet returned.

Although it was not known at the time of the Inuit report, Ross’s two ships, following the route that Franklin was assumed to have taken, had travelled through Lancaster Sound as far as Port Leopold on north-east Somerset Island, and wintered there.

In 1849, none of the whaling ships had reached that point, so none knew their whereabouts. So the Inuit story was assumed to be true.

In a letter to the Admiralty, Thomas Ward, of Hull, owner of the Truelove, wrote:

“It appears that the ‘Chieftain’ and other ships got to Pond’s Bay a day or two before the ‘Truelove;’ immediately they reached that place, some of the natives went on board, and without questioning, the man [one of the Inuit men] drew the sketch, and by signs and in words of his own language, understood by the master of the whalers, stated that two of the ships had been frozen up for four years on the east side of Prince Regent’s Inlet, and that the other two had been frozen up on the east side for one year … that he and his companions had been on board all the four ships in March last, and they were then safe.”

[Scholar David Woodman has pointed out that the interpretation of the sketch as showing two ships on opposite sides of Prince Regent Inlet may be wrong, for the sketch clearly shows what appears to be a strip of land between them, wide at both ends and narrowing to an isthmus in the centre. He thought that the sketch depicted Boothia Peninsula.]

Ward’s letter continued to say that the Truelove, to which the information was passed by Kerr, fell in with Captain William Penny on the whaleship Advice.

Both ships had fished successfully and had good quantities of oil aboard, but “the masters judged … that although the risk was great with such valuable cargoes on board, they would be disgraced” if they did not attempt to find and rescue the crews of the ships.

Both ships suspended their whaling and headed west into Lancaster Sound but were stopped by ice. Parker landed supplies at Cape Hay for the relief of the distressed ships should they break free from the ice.

The Admiralty interviewed both Parker and Kerr, and when the story was reported in British newspapers, there was short-lived euphoria. Franklin’s crews were safe, although still ice-bound!

Soon questions arose. If Inuit had visited the ships, as claimed, why had they not carried messages back to the Pond Inlet area, where Franklin’s men would have known that the Inuit would surely meet with whalers?

There were other questions that may have been raised at the time, and have certainly been raised by modern commentators. What about language?

Whaling ships didn’t carry interpreters, but many whaling men learned to speak and understand Inuktitut. Was Captain Kerr one of them? Had he spoken to the Inuit in their own language?

The report says that the native language was “understood by the master of the whalers”. But was this an exaggeration? How well did Kerr really know Inuktitut?

Did he talk with Inuit only in the whaler “pidgin” common at the time? Could Kerr have misunderstood what the Inuit told him? Could the whole story have been a misunderstanding?

And what about leading questions? Was the information voluntarily and freely given? The tale says it was—but was it really? Or had Kerr asked questions in such a way that the Inuit assumed he wanted to hear a certain answer, an answer that might result in him rewarding them with gifts?

Other Arctic experts chimed in with their opinions. William Penny, who had searched Lancaster Sound with Kerr until stopped by ice, was accompanied that summer by Robert Goodsir, whose brother was one of the missing men.

Penny no longer believed the report. Goodsir complained that the information “was distorted and embroidered as it passed from ship to ship.”

And then, in early November, James Clark Ross arrived back in England with the Enterprise and Investigator. The Admiralty immediately questioned him, and his answers disappointed those who believed the Inuit story.

Yes, he had wintered in the ice. But no, he had not seen any Inuit during the entire winter.

William Edward Parry, a respected old Arctic hand, commented, “How quickly the Esquimaux report has thus vanished! Alas! for poor Lady F!” The poor lady was Lady Jane Franklin, wife of the missing captain. Always hopeful, she had no way of knowing at that time that she was already a widow.

Then another story came to the fore. At the very end of 1849, a San Francisco newspaper reported that English explorers had rescued Franklin and his crew at Prince Regent Inlet.

A variant of the story reported that a gentleman who had recently arrived in Mazatlan, Mexico, from Kamchatka on the Russian coast, had reported that Franklin and his men were safe and had come through the Northwest Passage. The Nautical Standard reported this in Britain in March of 1850.

The Admiralty duly passed on the news to Lady Franklin. But she was not to be twice fooled.

The Nautical Standard subsequently reported that she “regards it as utterly devoid of foundation. She considers that it has evidently been derived from the Esquimaux report of last year having at length arrived at Petropolauski [Petropavlovsk on the Kamchatka Peninsula], where it was carried to California.”

The source of the report was probably this–the consul in Mazatlan had heard about the Pond Inlet report from British papers and passed the information on to a man “formerly connected with an independent yacht expedition from England.”

This was probably a reference to the Nancy Dawson, a private yacht that had assisted Franklin search vessels in Alaska. And from there, as with the whisper game, the report had become garbled.

So, a report that had started at Pond Inlet in the summer of 1849 had reached Britain by October of that year, crossed the Atlantic again to Mexico, then went north up the Pacific coast to San Francisco by late December, and possibly to Kamchatka, then back across the Atlantic again to London by March 1850.

It had evolved during these travels, from a report of ships beset by ice, to ships emerging triumphantly from the Northwest Passage in the western Arctic.

A well-travelled Inuit story, it was devoid of truth from start to finish.