The return of the Resolute 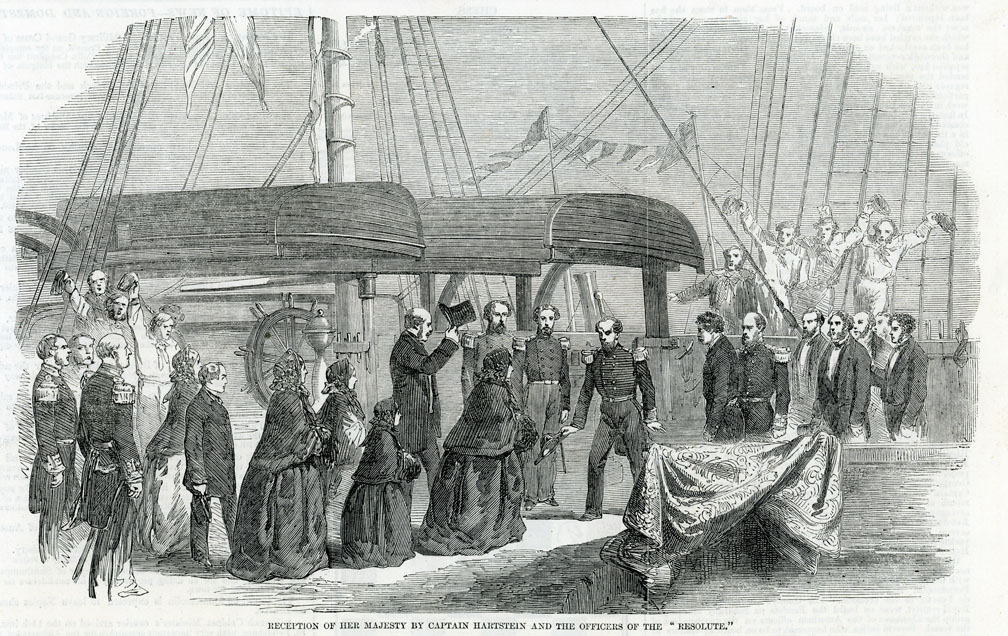 This illustration depicts Queen Victoria aboard the Resolute on Dec. 16, 1856, after the ship had been returned to Britain by the United States Navy. (Harper collection)

In September 1855, Capt. James Buddington of the whaler George Henry found a British ship, the Resolute, unmanned and adrift in Davis Strait.

The Resolute had been abandoned a year earlier while on a search for the lost expedition of Sir John Franklin. Buddington took possession of the ship and sailed it back to New London, Connecticut.

The American government purchased the ship from Buddington’s employer, restored it, and, as an act of friendship and diplomacy, presented it to “the Queen and people of Great Britain.”

In the fall of 1856, the vessel was ready for delivery to England by Capt. Hartstein of the United States Navy.

The Resolute anchored at Trinity Wharf in Cowes on the Isle of Wight. On Dec. 16, Queen Victoria, accompanied by her husband, Prince Albert, and other members of the royal family, attended a ceremony to receive the American gift.

Press reports tell us that “Captain Hartstein received the Royal party at the gangway, and the officers, in full uniform, were grouped on each side.”

He presented his officers to the Queen and then addressed her, in what has been described as a “frank, manly and eloquent address,” as follows:

“Allow me to welcome your Majesty on board the Resolute, and, in obedience to the will of my countrymen and of the President of the United States, to restore her to you, not only as an evidence of a friendly feeling to your sovereignty, but as a token of love, admiration, and respect to your Majesty personally.”

The Queen smiled graciously and responded, “I thank you, Sir.”

“The Queen’s photographic artist, by Royal request, went on board the Resolute on Saturday morning to group the likenesses of the American officers on the quarter-deck of the vessel. Several ladies, who happened to be on board as visitors at the moment, were also grouped with the officers…”

A different press report has it that it was Capt. Hartstein who wanted to have a picture made of the scene on board the Resolute when the presentation was made, but unfortunately the Queen had not remained. So Hartstein sent for an artist.

In that report, we are told that the captain and his officers grouped themselves together in the way they had for the official presentation. But the artist objected, saying that the picture would not be complete unless a lady were found to play the part of Her Majesty.

When his artist objected, Capt. Hartstein pointed out three ladies who were visiting the ship. Lt. Stone approached them to ask if one would stand in for the queen.

The young ladies were flattered but replied that they didn’t feel they could lend sufficient gravity to the occasion. “They feared they were in too laughing a mood to assume, just then, the dignity of Her Majesty,” a paper reported.

Lt. Stone then spotted another young lady who agreed “most graciously and pleasantly.” The officers gathered before her as they had before the queen herself.

Shortly thereafter, the young lady—whose name is unknown—composed a poem and returned to the ship to present each of the officers with a copy.

Here is her untitled poem:

Let us fill the glowing wine-cup,
And go off with ruddy lips —
Here’s a health to the brave defender —
The saviours of the ship.

In solitude they found her,
Drifting silently and slow.
With the storm-wind for her lullaby —
Her cradle of the snow.

They climbed her frozen bulwarks.
They trod the silent deck —
Strange was that total solitude,
And yet no trace of wreck.

Let us drain once more the goblet
To the gallant and the brave
Who gave the noble ship her life,
From midst her Arctic grave.

And once more send the toast around,
To those who brought her o’er,
From the fair land of sister States,
To the sister English shore.

All hail! To the spangled banner
And ever may it wave
O’er the lonely and oppressed,
To succor and to save.

All hail, our royal standard,
Floating proudly o’er the tide,
Beside the spangled banner,
Like a bridegroom and his bride.

Let us give an English welcome,
That welcome good and true,
To the gallant ship, the Resolute,
And all her gallant crew.