Kudlago — Do you see ice? 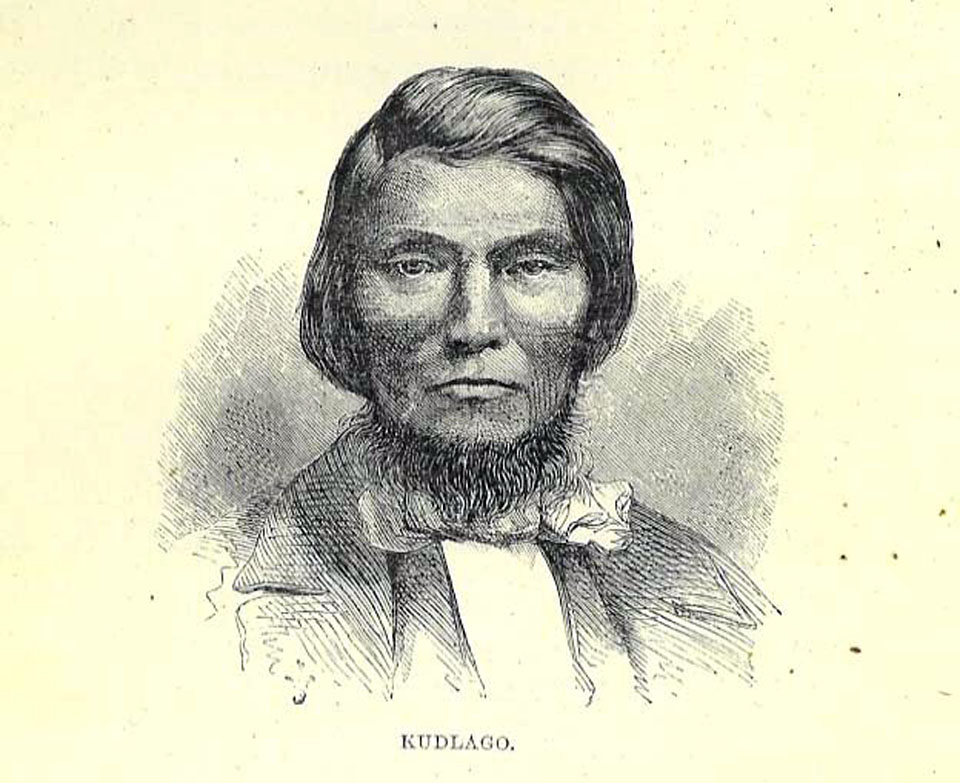 Recently, at the whaling museum in New Bedford, Massachusetts, I had an opportunity to see the log book of the ship George Henry from the 1860 voyage that took the neophyte Arctic explorer Charles Francis Hall north for the first time.

Nothing is more chilling than to see the record of a death aboard ship in a whaling log, edged with stark finality in black ink.

Such an entry appears for July 1, 1860. It is not, however, for a seaman, but for an Inuk traveller returning to the Arctic from a year in the south.

Sidney O. Budington was the captain of the vessel on which Hall had taken passage. Budington, a whaler experienced in the waters off south-eastern Baffin Island, employed numerous Inuit in his whaling pursuits, and occasionally took a man—and sometimes a married couple—south to spend a winter with him and his family in the whaling town of Groton.

Through Budington, Hall met one such visitor in the spring of 1860 when he was planning his first trip north—a trip on which he hoped to learn the fate of the missing Franklin expedition.

Hall realized that he would need an interpreter once he reached the Arctic, and he engaged the man to fill that role. The man’s English was poor, but the term “interpreter” carried many meanings on an Arctic expedition.

In fact, it mattered little whether an Inuk thus hired could speak much English at all—he was expected to be guide, hunter, provider and handyman. If he could actually speak the language of his employer, so much the better.

Hall wrote the man’s name as Kudlago. Captain Budington wrote it as Cudlargo. And others recorded it with other spellings.

On March 8, Hall briefly addressed a meeting of the American Geographical and Statistical Society on his plans, the first of many formal lectures that he would give on the Arctic.

Although the main speaker was Dr. Isaac Hayes, a veteran Arctic explorer who was then planning an expedition to the High Arctic, Kudlago, who accompanied Hall, was the biggest attraction for the newspaper reporters in attendance. They mangled the spelling of his name variously as “Cudlockdchue” and “Cudlouchdchdue.”

Hall’s spellings of Inuit names were extremely unreliable, and it is often dangerous to hazard a guess as to what was really meant.

But perhaps in the reporters’ spellings, we have a closer approximation of the actual pronunciation than in Hall’s own rendering. Comparing all spellings, I think his name was probably Kallaarjuk.

But I’m not certain, and so I’ll continue to use “Kudlago” for this account.

Hall described Kudlago as “a remarkably modest and unassuming man.” He was “quick to learn, and … never expressed surprise at anything. He looked upon the works of civilization with interest, but never with wonder.”

“One day, while riding in the cars toward New York, a boy passed through distributing circulars, giving one to Kudlago. He took it, looking attentively to see what others might do, and then, as they did, so, to all appearances, did he! Others held the circulars up before them and read. Kudlago held his up before his eyes and appeared to read. Though he could not read a word, yet he looked learned. Solomon may have been wiser, but surely not sharper than Kudlago.”

In mid-May, Hall and Kudlago both sailed north with Budington on the George Henry. For Budington, it was a whaling voyage. For Hall, it was the New Franklin Research Expedition.

For Kudlago, unfortunately, it was a voyage of death.

In the early part of the journey, Hall got to know Kudlago well, but the man took ill. He caught a severe cold as the ship passed through the fog-shrouded waters near Newfoundland.

His condition deteriorated quickly, to the point that he was unable to spend much time talking with Hall at all. The crew pitched a tent on the deck for him, and shot eider ducks so that Kudlago could eat their hearts and livers raw.

But their efforts were for naught. His health steadily worsened.

Kudlago knew he was near death. In his last days he talked of his home and family in Baffin Land, and his hope that he would see them once more.

“His prayer,” Hall wrote, “was that he might arrive home, and once more look upon his native land—its mountains, its snows, its ice—and upon his wife and his little ones; he would then ask no more of earth.”

In the early morning of Sunday, July 1, off the Greenland coast, still about 300 miles from home, Kudlago spoke his last words. They were in the pidgin whaler jargon that Inuit used to communicate with whalers in the eastern Arctic. 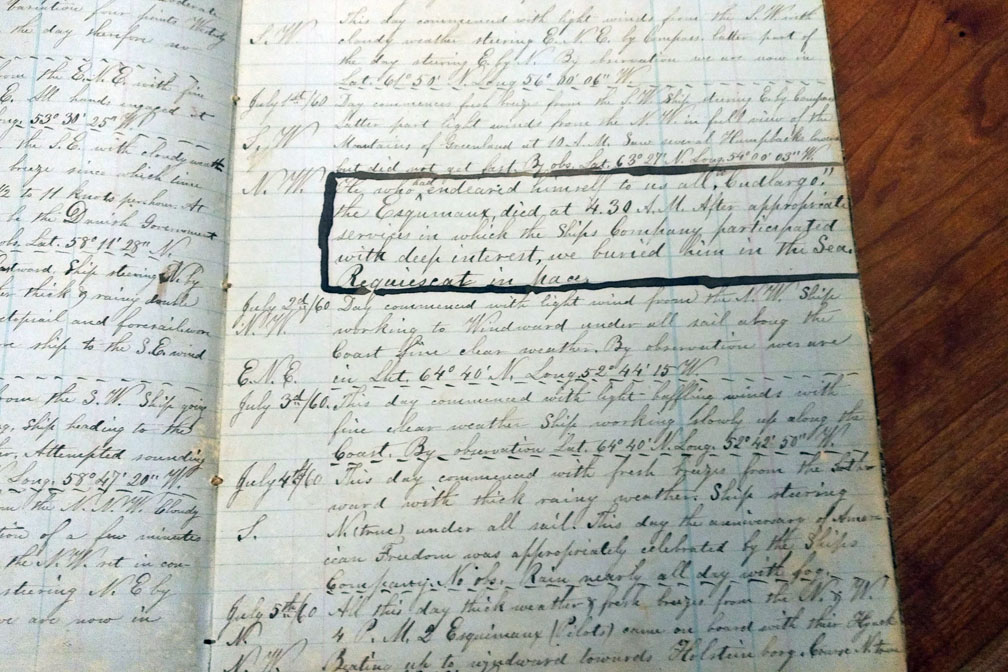 Kudlago’s death noted in the log book of the George Henry, the ship that was carrying Kudlago back to the Arctic in 1860. (Harper collection)

Hall recorded the man’s pitiful question. “Taku siku? taku siku?” he asked hopefully. (“Do you see ice? Do you see ice?”) Then the Inuk, who had gone to Groton as a reward for his service to Budington, passed on to his eternal reward.

Hall took part in Kudlago’s burial at sea at Captain Budington’s request. The entire ship’s company gathered for a solemn service to pay their last respects to the popular man. Hall read a section from the Masonic Manual and, after a prayer from the same work, Kudlago’s shrouded body was consigned to the deep.

Hall was a deeply religious man who saw the hand of God in everything. He had earlier described the first iceberg he saw as “a mountain of alabaster resting calmly upon the bosom of the dark blue sea… Its fashioning was that of the Great Architect.”

An hour after Kudlago’s body had slid into the sea, Hall gazed back in the direction of the ocean grave. “A snow-white monument of mountain size, and of God’s own fashioning, was over it,” he wrote. Hall sketched the iceberg and named it “Kudlago’s Monument.”

Sidney Budington or perhaps his first mate noted Kudlago’s death in the ship’s log in these words:

“He who had endeared himself to us all, ‘Cudlargo,’ the Esquimaux, died at 4.30 A. M. After appropriate services in which the Ships Company participated with deep interest, we buried him in the Sea. Requiescat in pace.”

(Historian Karen Routledge has used Kudlago’s final words, “Do you see ice?” as the title of her wonderful new book about Inuit and Americans in each other’s worlds.)