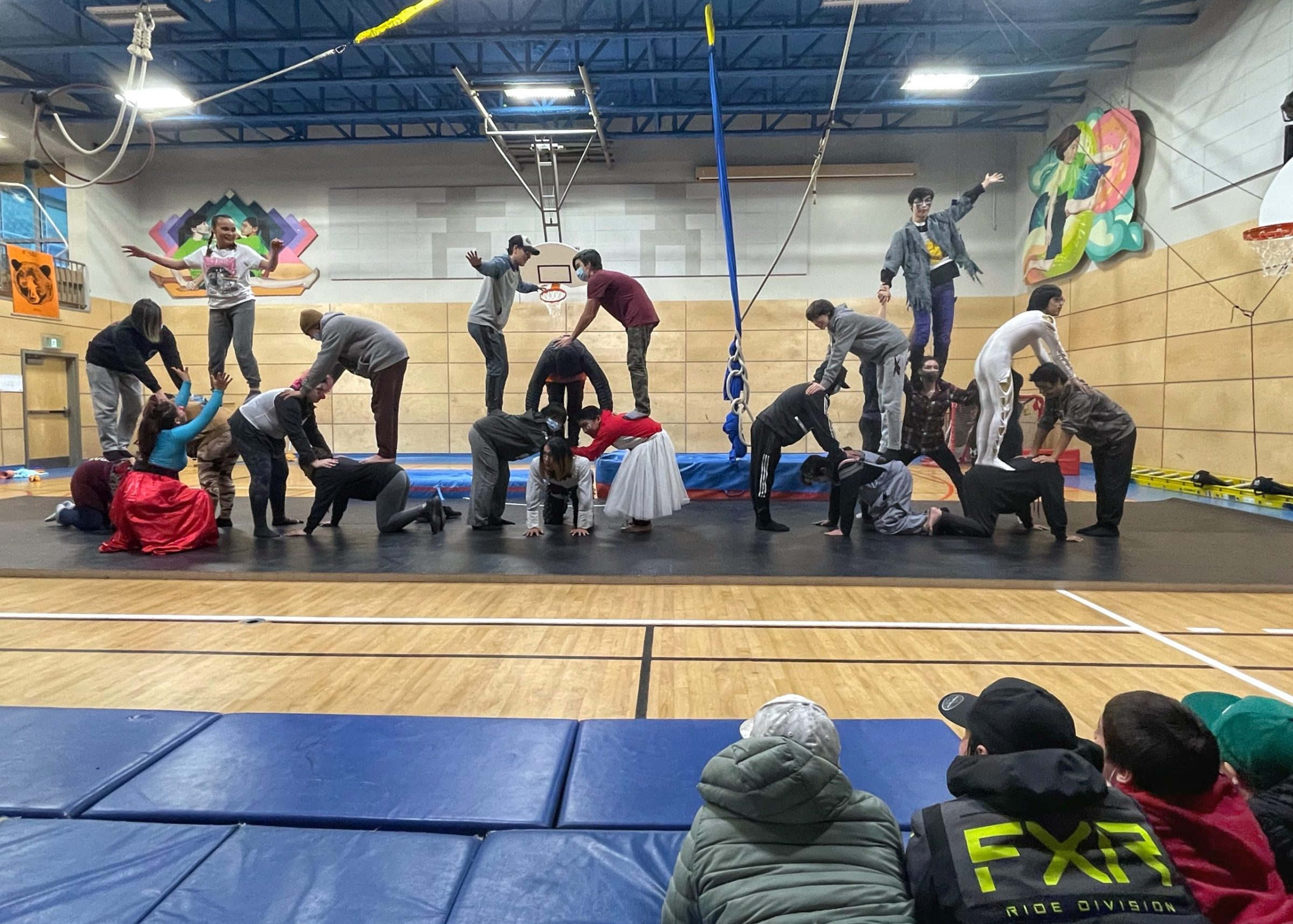 A group performs a human triangle as the finale to their circus performance at the Jaanimmarik School in Kuujjuaq. (Photo courtesy of Isabelle Dubois)

The performers prepare for their final act as about 100 people who have gathered at Kuujjuaq’s Jaanimmarik School gym look on with anticipation.

The circus was in town last weekend, but the performers were not travelling. Mostly, they were teenagers from the town of Kuujjuaq itself.

“It went amazing, chaotically amazing,” said Kayla Tukkiapik, a clown actor and juggler in the circus.

Tukkiapik and her fellow performers were participating in Cirqiniq, a social circus program. It travels to Nunavik communities and holds sessions to train the region’s youth, who are typically 13 and older, for circus performances.

The purpose is to give Nunavik youth the chance to work as a team, meet new people, and challenge themselves by learning to accomplish a circus performance, said Rebecca Leonard, a co-ordinator and also one of Circiniq’s founding members.

“People love it,” she said.

Before the human triangle, the performers put on a variety of circus acts over the course of the hourlong show.

There was the clown act, including one clown a mini-bike who pulled pranks on other performers, and another who played a tug-of-war gag on the audience.

Other players wowed with their juggling and stilt-walking skills, while yet another teen stepped up to break the town record in solving a Rubik’s cube.

And inevitably, there were parkour acts and aerial acrobatics to dazzle the crowd.

Tukkiapik, 19, said she has been attracted to performing in the circus since she was a child.

“It was a lot of movement, a lot of toys to play with and a lot of interactions,” she said.

Matilda Kauki, 17, one of the contortionists, said the circus is like a family. 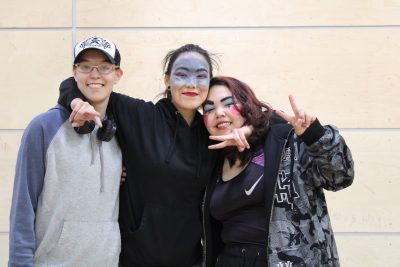 Cirqiniq performers (from left to right) Rivers Saunders, Matilda Kauki and Kayla Tukkiapik pose together after their show in Kuujjuaq. (Photo by David Lochead)

Having that level of inclusivity is one of the goals of Circiniq, Leonard said.

The organization was started in 2009 when the Kativik Regional Government, in partnership with Cirque du Soleil, initiated a mentorship program to teach young Inuit to lead circus workshops.

Leonard, a professional circus performer, was tasked with growing the program.

Today it travels through Nunavik communities with senior and junior instructors hosting two-week workshops aimed at kids 13 and older.

As well as letting them try something new and learn to rebound when they make a mistake, the workshops are an opportunity for the teens to feel included and to have a space to talk through any emotional challenges they are having.

“We believe [the circus] really does help people with their mental health and self-esteem,” Leonard said.

On top of that, some of the locals who participate end up performing in the circus professionally. Leonard said one group of instructors formed an Inuit Arctic circus group that has performed in Australia and Montreal.

Leonard said people have told her the program is important and must continue.

“The kids themselves are asking, ‘When are you coming back?’” she said.