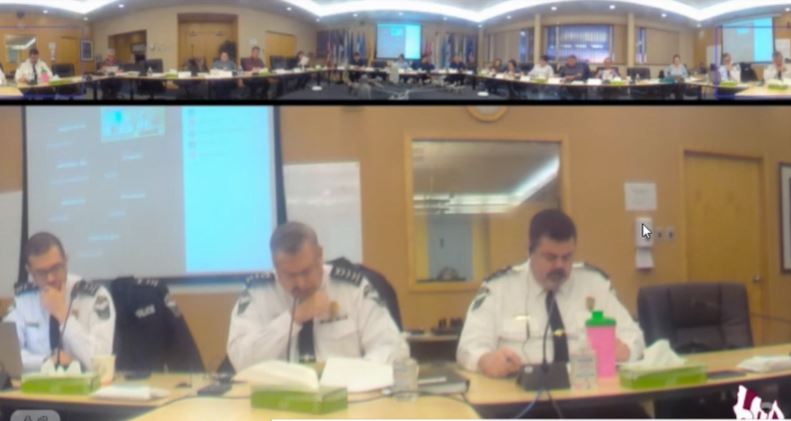 Chief Jean-Pierre Larose, along with deputy chiefs Jean-Francois Morin and Shaun Longstreet took questions and provided some crime statistic updates to the KRG Regional Council, which is meeting in Kuujjuaq this week until Dec. 1.

Several of the councillors, including Inukjuak Mayor Pauloosie Kasudluak, raised concerns about policing in communities, including use of force, unnecessary arrests, and the age and experience of officers new to working in northern communities.

“We are recruiting mostly older candidates with life experiences, with maturity, and with another profile of ordinary police officers.”

In response to questions about officer conduct complaints, Larose said he’s willing to speak in detail with community leaders, but serious complaints are investigated independently by the provincial Bureau of Independent Investigations, which is tasked with probing serious injuries and deaths involving police.

The bureau has announced four different investigations involving Nunavik police this year, two of which involved women who died in custody.

Larose suggested to KRG that a representative from the bureau should attend the next regional council meeting and explain its operations.

On the issue of new officers in communities, the three senior officers explained that, as part of the strict hiring process for Nunavik police, candidates are screened for their ability to work in the North with Inuit.

Larose floated the idea that village councils should invite officers to their meetings.

“Don’t be shy, and if there’s a problem, let us know,” Larose said.

Deputy chief Longstreet acknowledged a “serious shortage of police officers” in the region.

According to Longstreet, Nunavik police received 248 job applications this year, and 28 new people were hired.

Of 83 total officers across the region, only three are Inuit. None of the Inuit officers are on patrol; instead they work as training officers and investigators.

Larose said he hopes to gain the help of the current Inuit officers, as well as former officers, to recruit people from the communities. He added that Nunavik police will have a presence at community job fairs.

“We need, also, your help to encourage some interested candidates,” Larose said.

After a broad question and answer period, the police brass presented some of Nunavik’s latest crime statistics, which show a decrease in assaults and other violent crime.

They also spoke on some of the recent illegal drugs and alcohol seizures that occurred this year, adding they are working with Canadian North, Air Inuit and Canada Post to curb the flow of illegal substances being shipped into the region.

Longstreet presented on a proposed new 911 call centre to be built in a Nunavik community on the Hudson Bay coast, and said that representatives would be travelling to the communities next week to consult with residents.

The council meeting on Tuesday ended with the unanimous passing of a motion to support an agreement Nunavik police is hoping for with Canada Post to stop drugs from being mailed into the region.

“We will keep working together on all these suggestions,” said KRG chair Hilda Snowball at the end of the question period, speaking in Inuktitut through an interpreter.

“I’m glad to hear that you’re in progress with the work you do.”