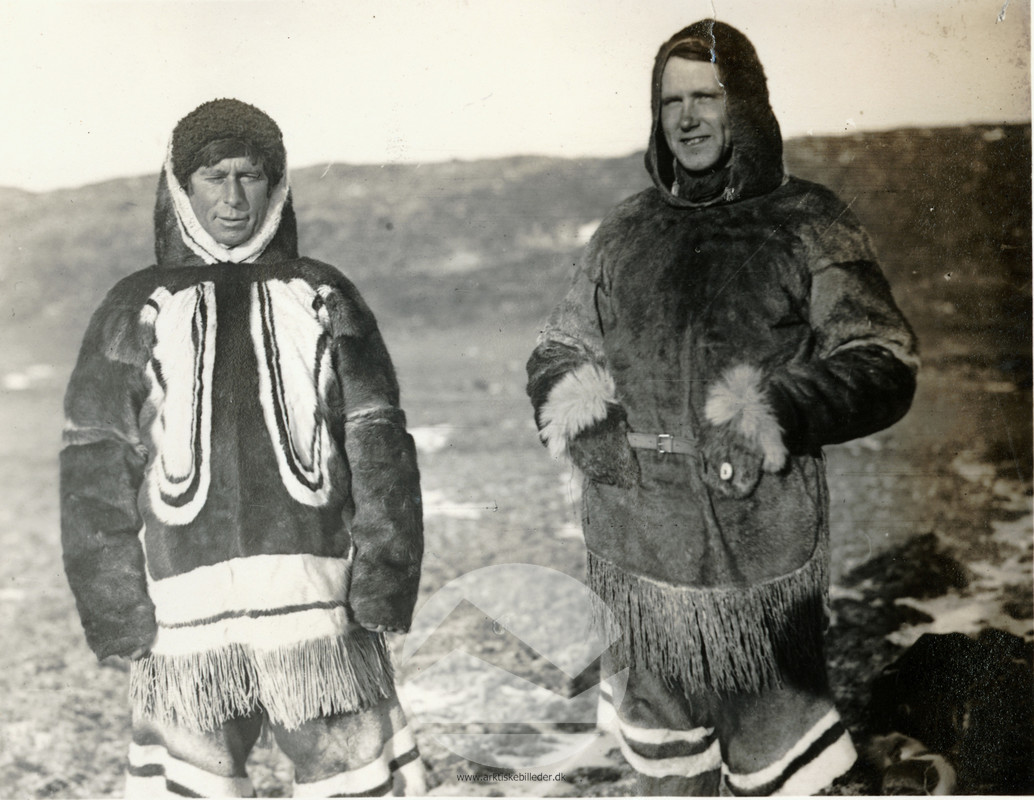 Knud Rasmussen and Kaj Birket-Smith on the Fifth Thule Expedition. (Photo by Therkel Mathiassen, via Arktisk Institut (Denmark), no. 269074)

They remained there for three days, learning about local conditions from the trader Henry Ford and the local Inuit.

They learned there were four groups of inland Inuit. They had already met members of the Qairnirmiut group — people of the flat land or bedrock — at Chesterfield Inlet.

The others were the Harvaqtuurmiut — the people of the rapids or whirlpools — who lived in various settlements on the middle and lower course of the Kazan River; the Paallirmiut — whose name has been variously given as meaning people of the willows, or people of the river mouth — who lived at Hikuligjuaq and were purely inland people; and the Hauniqtuurmiut — people of the place with bones — west of Rankin Inlet.

Rasmussen called them collectively the “Caribou Eskimos,” a term that had not previously been used.

The anthropologist Tiger Burch has pointed out that both Rasmussen and Birket-Smith failed to mention another group, the people of the upper Kazan River, in the far south-west of present-day Nunavut, living along the treeline from Nueltin Lake to Dubawnt Lake.

They traded to the south and did not have much to do with the other inlanders. They came to be known as the Ahiarmiut. This was an odd omission, for Father Turquetil, with whom both travellers had discussed inland Inuit cultures at length while at Chesterfield Inlet, had ministered to the Ahiarmiut when they came to trade at his first posting, Brochet, on Reindeer Lake in northern Saskatchewan, and had visited them in their own territory on a foray in 1901.

On May 15 Rasmussen and his party headed south in search of the inlanders. It was already late in the season.

Soon they reached a Paallirmiut settlement of three tents at the north end of the lake known as Hikuligjuaq — the place with much ice. This great lake is often marked on maps as Lake Yathkyed; the Chipewyan name is testament to the fact that this area was previously frequented by Indians who now lived farther south below the tree line.

There Rasmussen met the head man of the camp, Igjugaarjuk — the name means the little testicle — a man held in high esteem by his countrymen. Moreover, his camp had an abundance of caribou meat.

Rasmussen was most impressed by Igjugaarjuk. He thought him wise, independent and intelligent. Given the number of Inuit that Rasmussen met before the expedition’s end, it is high praise indeed that he eventually wrote, “Of all the people I have met on the long stretch between Greenland and Siberia, he occupies an outstanding place among all the prominent Eskimos.”

As if to prove his worth, Igjugaarjuk showed Rasmussen a document issued to him by Alfred E. Reames of the RCMP, who had been at his camp a year earlier on a manhunt for a young Inuk murder suspect. He had asked for Igjugaarjuk’s assistance and deputized him with an “appointment as special constable.”

Despite his admiration for the man, Rasmussen found this an amazing circumstance, for he already knew that Igjugaarjuk was himself guilty of a mass murder. Despite the scarcity of women in the camps, a result of infanticide of female babies, Igjugaarjuk had two wives. How he had acquired one of them was the source of Rasmussen’s astonishment; he told the tale succinctly:

“As a young man Igjugaarjuk had been in love with a woman named Kibgarjuk, but her family were opposed to the match. When he heard later that they thought of giving her to another man, he turned up unexpectedly one day, with his eldest brother, Harpik, at the entrance to the snow house where Kibgarjuk lived, and from there shot down her father, mother, two brothers with their respective wives, and finally, when Kibgarjuk had become alone, sprang in, carried her off and married her.” 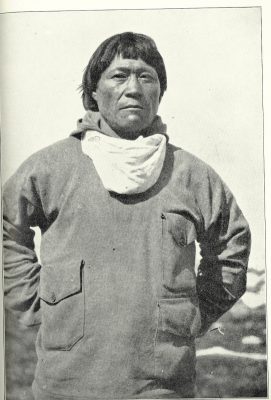 Igjugaarjuk, a shaman and leader of the Paallirmiut. (Photo courtesy of Intellectual Culture of the Caribou Eskimos, Report of the Fifth Thule Expedition 1921-24, Vol. 7, No 2, facing page 76)

The policeman, not knowing Inuktitut, had probably known nothing of Igjugaarjuk’s past. It is also probable that Igjugaarjuk put little effort into bringing the accused into custody.

Birket-Smith and Bangsted busied themselves collecting ethnographic specimens, but Rasmussen’s agenda was different. He craved stories, legends and language. When leaving a Qairnirmiut camp earlier, a man, Pukerluk, had told him, “Your tongue is not so frozen as when you came,” a tribute to his progress in adapting to the local dialect.

He also had had no difficulty in communicating with Igjugaarjuk.

So on June 14, leaving the other two men at Igjugaarjuk’s camp, Rasmussen and Qaavigarsuaq continued south over the still-frozen lake to a camp on its south shore presided over by Uningajaoq. Their time there was brief. They returned to Igjugaarjuk’s camp on June 22.

Three days later Birket-Smith and Bangsted left for Baker Lake in a canoe with a guide. They reached the trading post on July 5 “in an extreme state of starvation.”

The day after their departure from Hikuligjuaq, Rasmussen and Qaavigarsuaq headed north for Baker Lake by sled, assisted for part of the way by Igjugaarjuk himself. Summer was coming on quickly now and they were hampered by an absence of snow on the land.

They reached the post on July 4, four days after their compatriots. A day later they left for Chesterfield Inlet, which they reached on July 30. Their two compatriots arrived on August 7.

A few weeks later, they all took passage with Captain Berthie on the HBC vessel, Fort Chesterfield, to Repulse Bay, and returned to their home at Danish Island.

The inland adventure was over. It had been all too brief.

To read Rasmussen’s earlier plans, the investigations of the culture of the inlanders would be the main focus of his expedition, the means by which he and Birket-Smith would test the theories of his mentor, Steensby, on the origins of the entire Inuit people.

One wonders, then, why the trip was left to so late in the season. Alternatively, why did not Rasmussen pass a summer inland, and explore the unique cultures he found there in even greater detail? Mathiassen, Freuchen, and Olsen all had their own work plans, their own agendas, so their work would not have suffered by Rasmussen’s absence.

He could even have remained with Qaavigarsuaq, and sent Birket-Smith and Bangsted back. Why didn’t he do so, in this culturally rich area? As it was, he documented a unique culture extremely well in the short time at his disposal, but a lack of time constraints would have allowed him to learn so much more.

There are two possible reasons.

One is that, in planning his expedition, with its intended focus on the Caribou Inuit, he had not anticipated the rich store of information he would discover so close to his headquarters at Danish Island, in the person of the great shaman and story-teller Aua, not to mention his wife Orulo, and the other major Iglulingmiut storytellers, especially Tagornaaq and Aua’s brother, Ivaluardjuk.

This unexpected wealth of information was on his door-step and he had mined it extensively, especially on his first visit to Aua’s camp. Indeed, his winter visit to Aua was likely the reason for his late start to visit the inlanders. And, as rich as its results were, it was but a portent of what was yet to come the following year when Rasmussen would again visit the Iglulik shaman.

The other possible reason is starvation.

In the next instalment, I will tell about starvation among the inland Inuit.