There was almost twice as much lightning north of 80 degrees in 2021 as in the previous nine years combined, a Finnish firm says 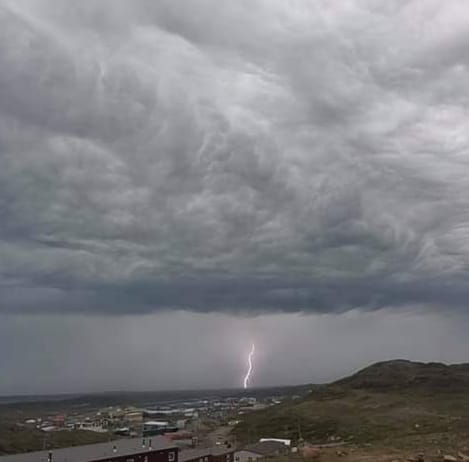 A rare lightning strike is seen in Iqaluit in August 2021. (Photo by Sean Naulaq-Rose)

Scientists have long known that lightning is becoming more common in the Arctic, but a new report shows that the trend is increasing especially fast at the highest latitudes.

In 2019, a dramatic set of lightning event near the North Pole made headlines.

Then in the spring of 2021, a paper reported that lightning had tripled in the Arctic over the previous decade — an increase that climate scientists had predicted would come with rapid warming.

As if on cue, later that summer, unusual lightning events struck over sea ice off Northern Alaska and near Iqaluit in Nunavut.

Now, the Finnish weather information company Vaisala, in its annual lightning report, has documented a dramatic increase in lightning at the highest latitudes.

In 2021 there were 7,238 lightning events north of 80 degrees North latitude, the company said. That’s almost twice as many as in the preceding nine years combined. Even further north — north of 85 degrees — the company recorded a record high 634 events. (Areas of the Arctic further south, where lightning is a little more common, didn’t see such dramatic increases.)

The spike was linked to “a series of low pressure systems exiting northern Siberia and crossing the Arctic Ocean,” the company’s lightning applications manager, Chris Vagasky, told Gizmodo, combining high temperatures and humidity to create conditions more like those “seen over the Great Plains of the United States during severe weather outbreaks.”

Because the thunderstorms that generate them require heat to form, lightning strikes are one variable scientists use to track climate change.

It’s long been known that the Arctic is warming faster than the rest of the planet.

Early in 2021, the Arctic Council confirmed that the Arctic is warming three times as fast as the global average — but by last month a new study revised that figure upward again, to a staggering four times as fast.

This story originally appeared at Arctic Today and is republished with permission.