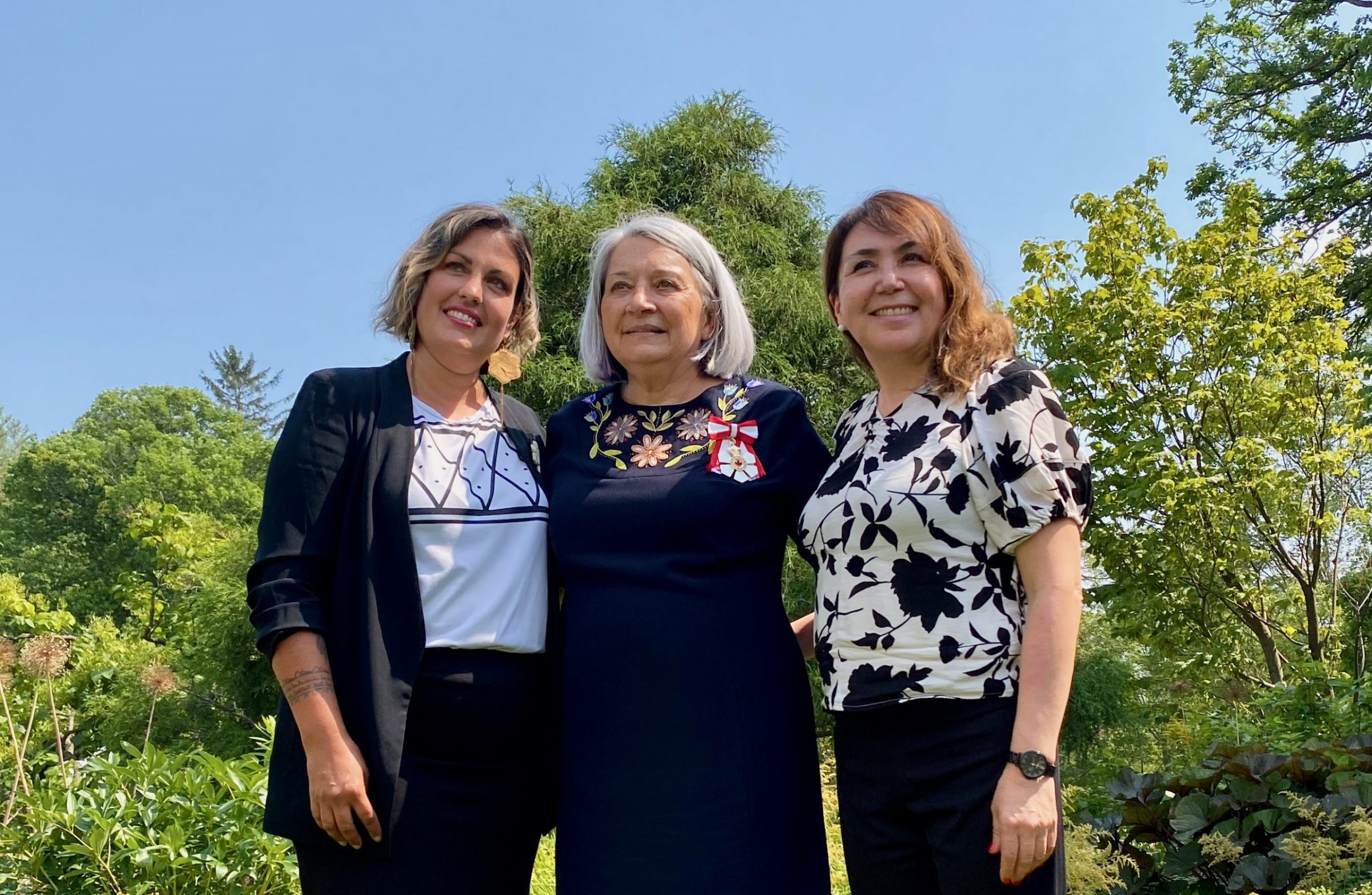 Julie Grenier (left) and Victoria Okpik were able to see their work in the spotlight on Monday as Mary Simon (centre) wore their dress at her installation ceremony on Monday. (Photo courtesy of Victoria Okpik)

They had just a few weeks to come up with a design and sew the dress and jacket, before applying painstaking beadwork. Then there were 13 hours of last-minute alterations. That’s how two Inuit artisans created the outfit worn by Mary Simon when she made history as Canada’s new Governor General.

Simon is the first Indigenous person to take on the role, and the outfit she wore to her installation ceremony on Monday is representative of that.

Victoria Okpik, born in Quaqtaq, is the designer behind Simon’s dress and jacket, while Kuujjuaq’s Julie Grenier did the beadwork on the dress collar. 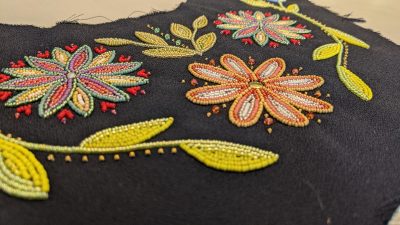 The dress worn by Mary Simon when she was installed as Canada’s Governor General features beadwork by Julie Grenier. (Photo courtesy of Julie Grenier)

“I was extremely proud to be part of this important moment in history,” Okpik said.

“It was another level of stress to try to do something this important,” she said, “but I enjoyed it.”

She explained Simon’s dress represents Inuit with an akuk — or curved — hemline, like what would be seen on an amauti, a traditional parka made for carrying babies in the hood.

It also represents Métis and First Nations peoples through the beadwork on the collar. 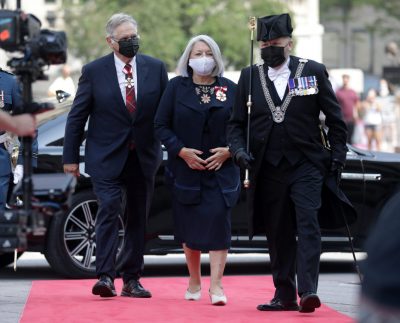 When Simon asked Okpik to design her outfit about three weeks before the ceremony, Okpik immediately accepted.

First, Okpik came up with three design sketches for Simon to choose from and adjust as she wanted.

Then, Simon chose navy blue for the colour of the dress and jacket, and Okpik set out on a search for the fabric, sending photos of suggestions to Simon’s daughter Carole for input.

Once the fabric was chosen, Okpik started working on the pattern.

“I knew it would take a little bit longer for the beadwork so I cut a piece of fabric for [Grenier] to start working on,” she said.

On July 24, just two days before the ceremony, Simon had her first fitting. It was the first time she saw the outfit in person.

The dress fit well, but the jacket was another story.

“I worked on [the jacket] for another 13 hours,” Okpik said. “Ripping it apart and redoing everything according to the measurements.”

“You can see the gravity of the pressure I was under,” she said with a laugh.

Okpik said she wasn’t expecting to do many alterations in Ottawa, but she brought her sewing machine along with her just in case.

“I’m extremely glad I did,” she said.

She set up shop in her brother’s house and worked two more full days before delivering the finished jacket at 5:30 p.m. on the night before the ceremony.

The beaded neckline was a process unto itself.

Early in the design process, Simon wanted a beaded necklace to go with the dress, but Okpik and Simon decided together that a beaded collar should finish off the piece, Okpik explained.

That’s when Okpik reached out to Grenier, whom she had bought a beaded necklace from before, and Grenier gladly accepted the offer. 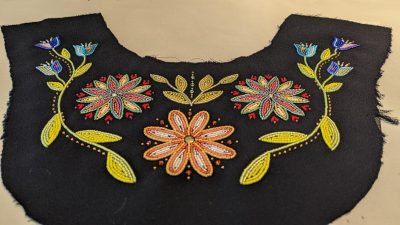 The beadwork adorning the collar portion of Mary Simon’s dress took about 55 hours of work. (Photo courtesy of Julie Grenier)

Grenier said a highlight of the experience was feeling fully entrusted with the project.

With no restraints on the colours or the design, she just followed her creativity.

“I was able to just flow through from one colour to the next,” she said. “I really had no limitations.”

“When I was beading, I was always thinking about Mary in the back of my mind and about the person she is.”

Grenier and Simon go back a long way — they both grew up in Kuujjuaq, with Simon living across the street from Grenier’s parents’ house.

The two continued to cross paths over the years through Grenier’s work as the director general of Taqramiut Nipingat Inc. and as chair of the board for the Aboriginal Peoples Television Network.

Grenier started beading the piece of fabric Okpik gave her for the collar July 20 and put in 55 hours of work to get it done within five days.

She explained the design is partially inspired by the tundra.

“You look at it from far and you see it one way, but the closer you get, the more details you see,” she said.

“Like the microscopic flowers you find on the land.”

With different shades of greenery and a variety of flowers, Grenier said the plants represent what “ties us all together from one coast to another, wherever we are.” 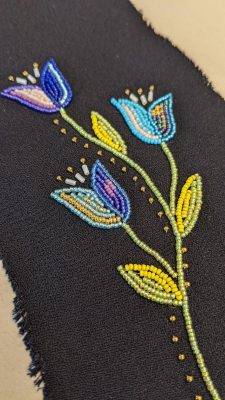 Bellflowers, which can be found in Mary Simon’s hometown of Kuujjuaq, are featured on her dress. (Photo courtesy of Julie Grenier)

Among the beaded flowers, Grenier included purple bellflowers, which grow in Kuujjuaq.

When she finally got to see her work worn by Simon on Monday and discuss it with her, Grenier said it was an emotional day from start to finish.

“I don’t think I’ve fully wrapped my head around everything, it has all happened so fast.”

Grenier has been doing beadwork since she was seven years old and displays pieces on her Instagram page, while Okpik is the lead designer at Okpik Designs.

Although this was their first collaboration, Grenier said “something tells me it won’t be our last.”